Sy’s adventure continues on the Earthwatch expedition Tracking Asiatic Wild Dogs in Thailand. As the mysterious dholes continue to elude the research team despite their best efforts, Sy and her fellow volunteers, along with the Earthwatch scientists leading the expedition, experience some of the incredible wildlife that inhabits Thailand’s Khao Yai jungle.

We keep our backpacks loaded with water, hats, headlamps, and insect repellent. We leave our boots and leech socks ready by our cabin’s door. When our telemetry receiver signals that a trap has been triggered, we don’t want a captured animal to wait a minute longer than necessary. Especially if it’s our query — Asia’s elusive and enigmatic wild dog, the dhole.

Due to a quirk of its physiology, a captured dhole is dangerously vulnerable to overheating, even at night when tropical temperatures dip into the high 60s. But other species, too, could be caught in our traps, and we owe all animals a quick response. That’s why at least one member of our Earthwatch-supported study team (our Dhole Pack, as we call ourselves) checks the signal coming from each of our trap arrays every 15 minutes, ‘round the clock. If the signal sounds, the whole team rushes to the scene, stat.

Though we haven’t caught any yet, we know dholes are visiting our traps. Yesterday we found a fresh footprint at the trap array we’d set up at an area called Nong King. Though the wary dog had eluded the padded jaws of the 8 traps we’d set around the bait, our game camera captured its image. [Read more about this experience in the last blog post: “Never a Dhole Moment.”] 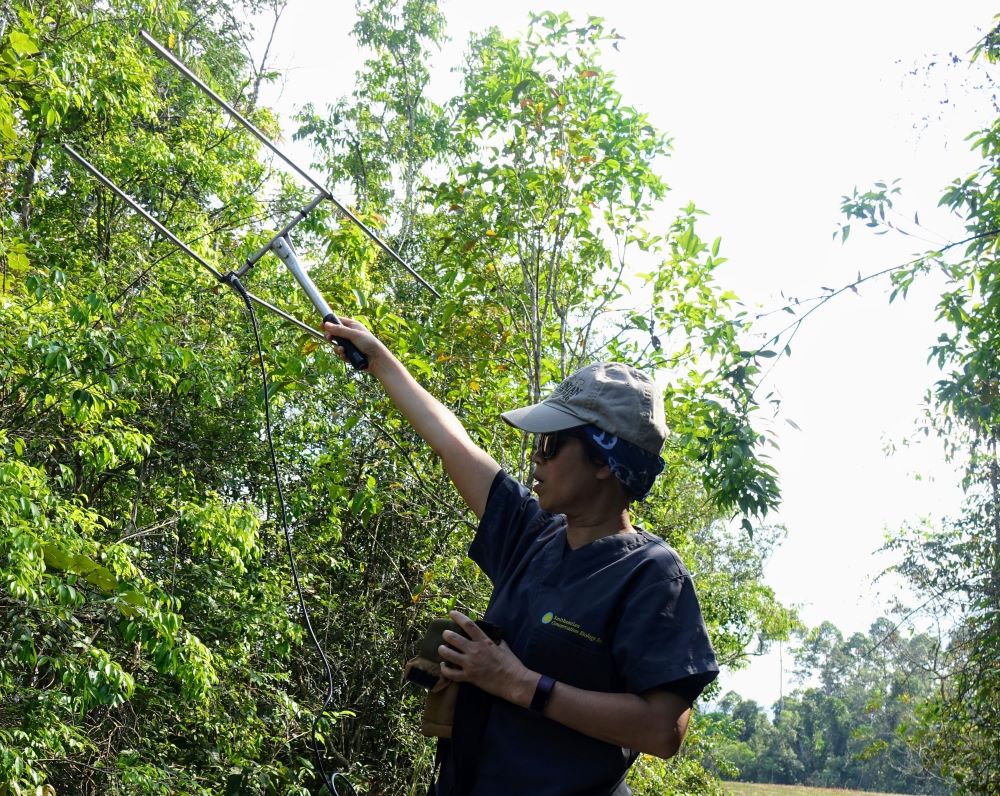 So far, other than this dhole, our traps have been triggered by the wind, a passing porcupine, and a large Indian civet – a creature who looks like a sort of cross between a weasel and a cat. The civet was actually caught in the trap, but our veterinarian, Dr. Warisa Thomas, released it so quickly most of us didn’t even see it. (Our presence in the forest in the middle of the night also triggered a visit from gun-toting park guards, checking to make sure we weren’t poachers.)

At 11:05 a.m. on Friday, while we’re refreshing the bait at trap 773, Kasetsart University PhD student Noraset Kheiwrsi (who mercifully lets us call him “Nook”) spots a dhole sunbathing near some trees at the edge of a clearing. And one sighting means the rest of the pack is nearby –perhaps as many as 20 individuals.

“The dholes are waiting for us,” Dr. Nucharin Songsasen, co-leader of our expedition, assures us. “Catch me if you can!”

Our luck, we feel, is about to change. And sure enough, that very afternoon, a revelation comes – though not the one we expect. 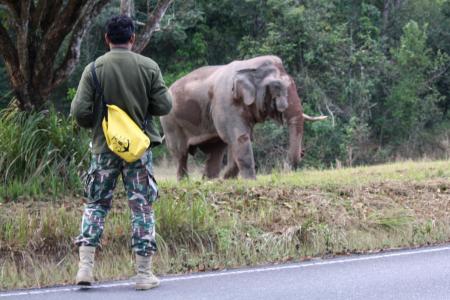 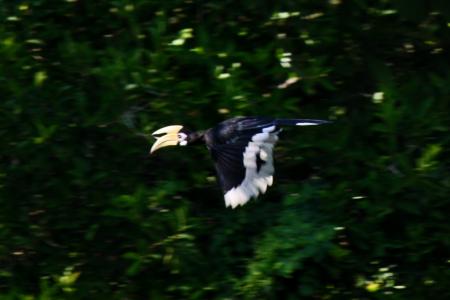 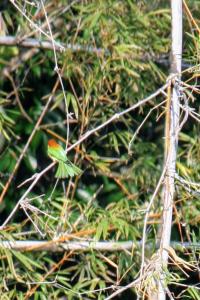 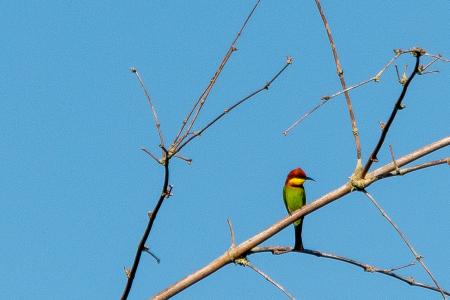 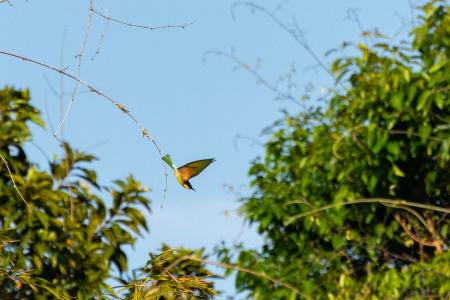 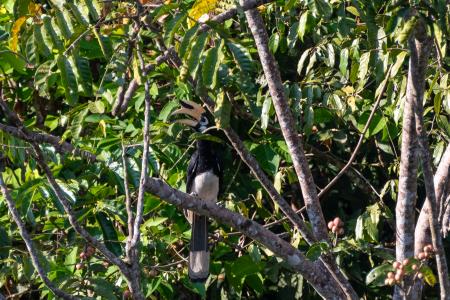 4:35 p.m. – Behind us: a road, a park gift shop, an information center, and about 100 tents. But before us, right across a tea-colored stream, is pristine jungle – palms, vines, bamboo, and fig trees whose roots flow down like melting candle wax.

Just an hour earlier, we had rushed from a coffee shop to a clearing where we watched, on foot, while a wild, one-tusked male Asian elephant, about 45 years old, sprayed dust over his back through his trunk about 100 yards away. But I’m still dazzled by the juxtaposition of iconic jungle animals and an iced cappuccino.

Now, at the busy Lum Ka Tung campground, in sight of public bathrooms and picnic tables, we watch transfixed as a pair of hornbills soar on wings as loud as jets. They land in a wild lychee tree to feed upon its red fruits. A pair of bee-eaters, jewel-like little birds decked in turquoise and orange feathers with downward curving bills, flit between bamboos. The brown water’s surface quivers with the breath of fish and the touch of insect feet.

Then suddenly, from the dark hole of the shadowy forest, a wonder emerges: a baby Asiatic black bear, also known as a moon bear, steps into the light.

In full view of a delighted human audience, the cub takes a few steps and then sits down, much like a human toddler. With his dexterous paws, he selects some stems of heart-shaped leaves growing along the riverbank and crunches them in his mouth. Periodically he looks directly at the gathered crowd. His big, round, Mickey-Mouse ears swivel to catch our murmurs. His dog-like nostrils flare to capture our scent.

An announcement blares over park loudspeakers advising campers to pay their fees, clean up trash, respect the animals. The little bear is unperturbed. He goes back to feeding, casually strolling across our line of vision to select more succulent stems to munch.

A motorcycle roars by on the paved road just 10 yards in back of us. The cub looks up. He scratches his right ear with a pink-soled back foot. We watch him feed in full view for more than half an hour. Where is his mother, we wonder?

At 5:20 p.m., we find out. Stepping from the same shadows from which the cub had emerged appears a figure even darker. Bearing the black, lion-like mane that distinguishes her kind, the 300-pound mother bear heaves out of the forest. She must have woken from a nap.

Seeing her cub so exposed to people and other dangers simply will not do. She paces determinedly over to the baby. He swings his face to greet her. Their noses a foot apart, she transmits her decree: we’re outta here. As she turns and walks uphill into the forest, he scurries behind her, and in seconds, they disappear into a tangle of green.

“Today’s my lucky day!” Nucharin tells me in hushed tones. “I’ve never seen this species in the wild!” Not in all her years as a wildlife biologist, not in all her time spent exploring Thailand’s jungles. I once wrote a book on moon bears. In five trips to Southeast Asia, while I met many bears that had been captured, I never saw one in the wild either.

Our time with the bears feels like a blessing, a miracle. And in fact, it’s both, plus a welcome – at last, it seems, the jungle opened to us.

At dinner, we take bets, for a case of beer, on when – not if – we’ll catch a dhole tonight.

Earthwatch’s communications director Alix Morris bets 11:45 p.m. Volunteer Roger Wood reckons 6:30 in the morning. His daughter, Parker, guesses 5 a.m. Nucharin says 6 a.m. Most of the grad students guess after midnight. Nook says 10 p.m. I don’t place a wager, but I’m confident something is about to unfold.

It happens on our watch. Alix, Roger, Parker, and I get the signal at 9:45 p.m. It’s trap 743. The advance party races ahead and discovers that we have captured, caught by the right front paw…a golden jackal!

Jackals are smaller than dholes – averaging 22 pounds versus the dhole’s 30 – and eat smaller prey. But they’re both species of dogs. Jackals can share diseases with dholes, the health info on this fellow could be important.

Dr. Dao, the project’s veterinarian, anesthetizes the animal, and quietly everyone takes blood, records measurements, and plucks hair samples. We remove ticks from the jackal’s ear. Before he wakes from his slumber, we close all the traps where he was caught. Because the tranquilizing drug causes amnesia, he’ll remember nothing of his ordeal. When we finally see him stagger away, he heads right for the bait. Tonight he can eat his fill of pork.

We’re getting closer: At least we’ve caught a dog. And Nook wins a case of beer. 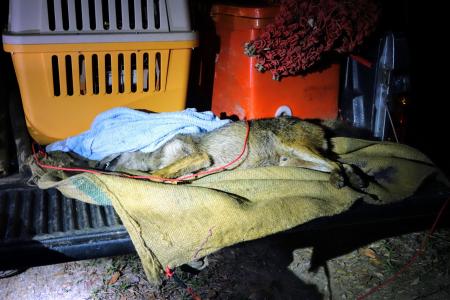 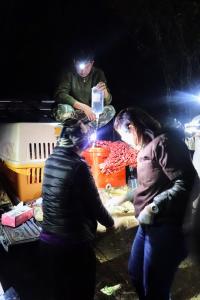 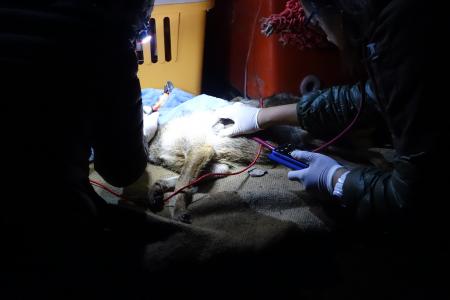 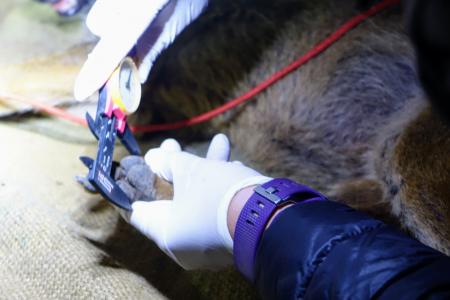 This is Sy’s fifth and last post in her series from Thailand. Check out the first, “Worlds Between Worlds,” second, “In the Land Where Deer Bark and Dogs Whistle,”  third, "Leech Socks, Lizards, and Bottles of Blood,"  and fourth, "Never a Dhole Moment," to learn more about her experience!