Reporting live from the Earthwatch expedition Tracking Asiatic Wild Dogs in Thailand, author Sy Montgomery and her team wait in eager anticipation for dholes to find the baited capture traps. The team is part of the first telemetry study of these Asiatic wild dogs at Thailand’s third-largest, and most visited national park.

Khao Yai National Park, Thailand — Every 15 minutes, we check the signal. Holding it aloft, into the warm tropical night sky, we swing the telemetry antenna gently until we hear the receiver give its soft answer from our trap sites. From the Khao Rom site, near a den, channel 714 answers steadily: Beep, Beep, Beep. From channel 773, the site near the former golf course: Beep, Beep, Beep. And from Nong King, channel 803, the answer is the same: Beep. Beep. Beep.

The consistent rhythm tells us no traps have been sprung. And once again, with a mixture of disappointment and anticipation, we set Earthwatch communications director Alix Morris’ cell phone to alert us when another quarter hour is up, and we can check again to see if the signal has changed from its consistent rhythm to an urgent and irregular beep, bearing the news that one of the padded leghold traps we set earlier today might have captured our quarry.

We know there could be false alarms. Other animals – including carnivorous lizards or curious elephants – could trip a trap, rush off with the bait, or wreck the entire array. Or a trap might catch the wrong species, like a civet or even a hawk — also a thrill to see, and a rush to rescue. 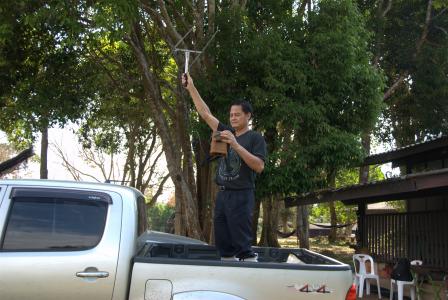 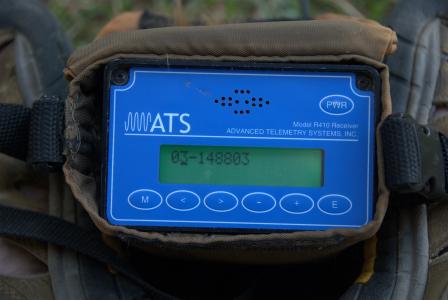 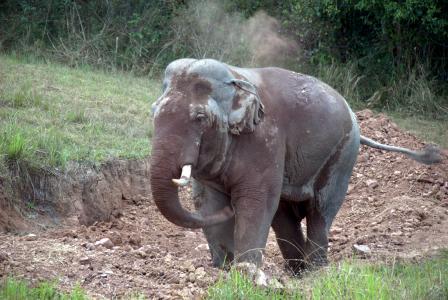 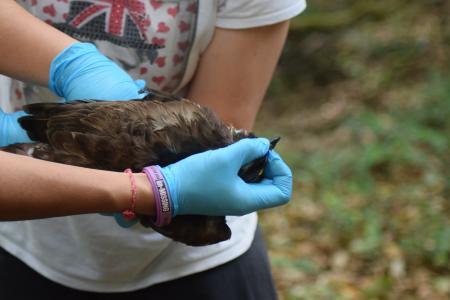 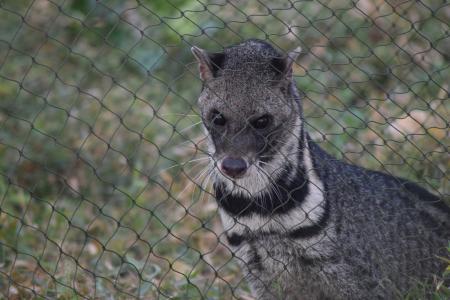 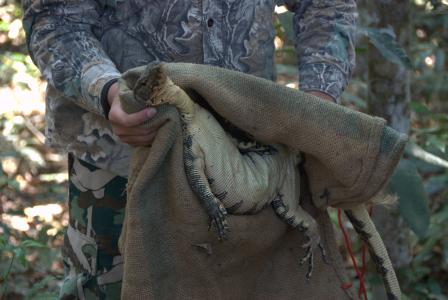 But we’re desperately hoping to capture dholes. All of us have come here, some of us from halfway around the world, to help with this third year of the first-ever telemetry study of these Asiatic wild dogs at Thailand’s third-largest, and most visited national park.

Even as it nears midnight, we’re on edge with excitement. Earlier, wildlife veterinarian Dr. Warisa Thomas had told us what to expect.

“The vet and capture team goes in first,” she told us. If the dhole is an adult (growing youngsters aren’t collared, lest the automatic drop-off fails and the collar becomes too tight), they net the dog and pin it down so the vet can inject anesthesia. Then the rest of the team helps take and record measurements and keep the dhole cool. All stay with the dog until it recovers from the anesthesia and can safely walk away.

But there are often surprises. Last year, the first dhole an Earthwatch team had helped collar had been captured at 1 a.m. Everything had been going smoothly. Someone heard a noise behind them – probably a Malayan porcupine, Warisa thought. But right after the team released the newly-collared dhole, they heard the noise again. They turned around. . . and faced a male elephant in musth. Somehow, eight people managed to pile instantly into the cab of a single pickup truck.

“If you see an elephant,” Warisa warned us, “get in the car or behind the car. Don’t use flash photography. In these forests, there are bears. There are gaurs [huge, dangerous wild cattle]. I’m not trying to scare you,” she told our group, “but be aware.”

Each time we check the signal on our 8:30 p.m. to midnight shift offers an opportunity for adventure. But for me, and the rest of the team, the greatest excitement would simply be to see, up close, one of these mysterious wild dogs, among the rarest and least studied animals on Earth – and to play some small part in helping to understand and protect them.

But tonight, our wishes are denied. We hand over the telemetry to our Thai colleagues and go to bed with our backpacks packed and our clothes laid out, ready to dress and run at a moment’s notice.

We’re on the porch of our guest house, sipping instant coffee and eating breakfast bananas when Jennifer Buff, who provides field support for Earthwatch teams, races over from the adjacent cabin at 8:55 a.m. She’s giving the thumbs up. “We’ve got a trigger!”

Film school junior Parker Wood leaps five feet into the air. Her dad, Roger, remembers to throw the bananas inside, safe from macaques. We pile into two trucks, pulling on our leech socks, and rush to Nong King.

“Bird,” he predicts. Dholes tend to visit traps in the night — though they could come anytime.

Warisa has rushed ahead of us, and we’re about to pull up to the dirt trail when she calls Nucharin on her cell phone. The trap is empty, the bait intact. But now there are fresh footprints. . . of a dhole! 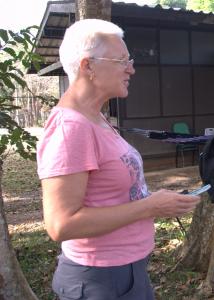 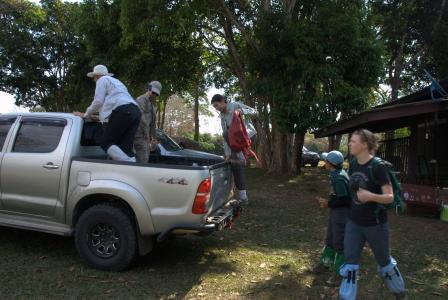 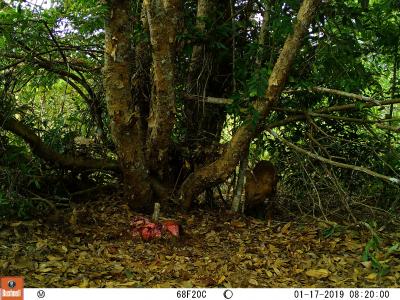 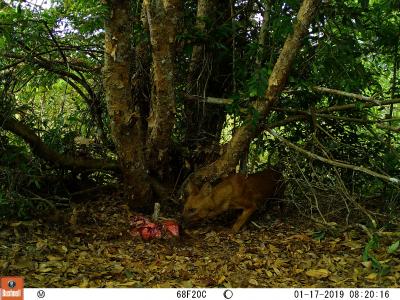 Back at the guest house, we review scenes from the camera trap Ronglarp erected yesterday to learn the story: The dhole first appeared at 8:19 a.m., approaching the trap array from behind the tree. The dog steps forward, backs off, advances, retreats, advances again, comes within one foot of the bait. On a fourth try, the animal seems to take a small bite of the meat. The dog approaches a fifth time, a sixth, and a minute later, cautiously approaches again, ears forward, intent. A seventh try comes one minute later. At 8:22 a.m. he steps on one of the shiny new traps, snaps it, and runs away.

“That means they could be coming back to any of our stations,” says Jennifer. “They’re back!”

This is Sy’s fourth post in her series from Thailand. Check out the first, “Worlds Between Worlds,” second, “In the Land Where Deer Bark and Dogs Whistle,” and third, "Leech Socks, Lizards, and Bottles of Blood," to learn more about her experience!