Khao Yai National Park, Thailand — Not far from park headquarters, in a grassland edged by young forest, we park our two pickup trucks at a popular camping area called Khao Rom – “shady mountain.” On foot, we pass the empty campsites, stepping over bottle caps, a cellophane candy wrapper, a toothbrush, and, disconcertingly, someone’s discarded underwear, perhaps dropped in a tent raid by nosy monkeys. Shortly after, we step onto a narrow animal trail, into the leafy shade.

“This is an area that the big pack has used for the past two years,” Dr. Nucharin Songsasen, one of two lead researchers on our Earthwatch expedition, tells our group. “We actually see dholes here.”

Two minutes’ walk from the parking area, we stand before a den dug by dholes – among the world’s most endangered and mysterious canids. In this underground chamber, members of a pack of about 20 raised their cherished pups last year.

The den is big enough for a small person to climb inside, Nucharin reports. She speaks from experience. Last year, after the dholes had left, she crawled in—emerging with a tick stuck inside her ear that had to be extracted by a doctor. (“That’s what you get poking your head in animal holes!” her sister, an exhibit designer, chided.) We’re all glad we’re wearing our leech socks. The monsoon’s slippery blood-suckers are gone, but in the dry season, the socks help protect against pepper ticks. (None of us brought the optional snake gaiters which were recommended to guard against cobras along the trail.) 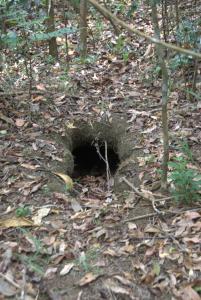 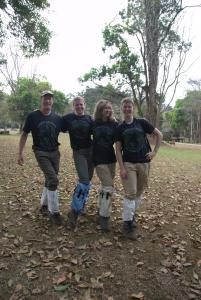 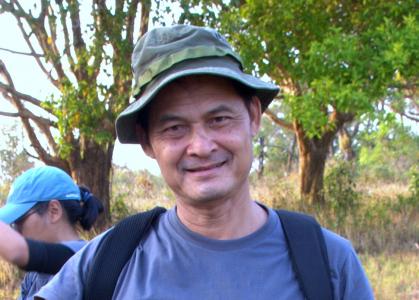 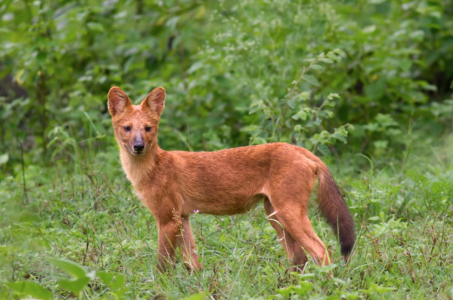 Our team – Nucharin, project co-leader, Kasetsart University professor Dr. Ronglarp Sukmasuang, two of his graduate students, several forestry interns, a wildlife vet, and volunteers from Earthwatch – is out scouting sites to set out padded leghold traps. As part of a three-year study at the park, we hope to capture and radio-collar these red-haired, bushy-tailed dogs to learn about their secret lives. How much land do they need, and what types of habitat? How do packs interact? Are males’ ranges different from females’?

But something is missing. Yesterday, hiking on trails past dug salt licks and waterholes, we learned to identify the doggy paw prints of dholes and their pointy-tipped, hair-filled scats – as well as signs from many of the other 64 species of mammals at Khao Yai, from Asiatic black bears to tiny leopard cats. But we’ve spotted no recent dhole activity along this trail.

“Normally around here, you’d see them nearly every day,” says wildlife veterinarian Dr. Warisa Thomas, 34. “But maybe they didn’t come back this year.” Camera traps mounted across from the den showed no activity this past week.

Where are they now? And if they are nearby, where should we set up the traps?

“It’s not easy picking a site for traps,” Nucharin explains. Finding a spot that’s actually frequented by dholes is just the beginning.

Trapping dholes is an endeavor fraught with drama, logistical challenges, and potential danger – both to the dholes and to the people seeking to study and protect them. But because the dogs are at once so unknown and so endangered, the data our study could yield is worth the risk.

The trap location must be near shade to prevent trapped dholes from overheating. This is a major health threat when these wild dogs are stressed by capture. But the forest canopy overhead must not be so dense that tree leaves block transmission from telemetry that signals a capture.

The site can’t be along a major track, or tourists might trip the traps or scare the dholes. But it can’t be too far away that the team can’t get to the trapped dholes quickly.

And then there’s the issue of water. Dholes like water and often swim to kill prey. But a trap site too close to water will draw carnivorous monitor lizards—and they will steal the bait. (One field season, the team’s traps captured 30 monitor lizards in a single month.)

In fact, the meat bait attracts predators ranging from mammals to reptiles to birds. Sometimes they merely take the bait; but if these unwanted animals are captured, of course, they must be quickly rescued and released. One night, Warisa recalled, three traps were sprung – one by a palm civet, and one by a large Indian civet. “The large Indian civet was hard to restrain, and I had to anesthetize. They bite!”

Elephants trash traps, appear suddenly at capture sites, or block the roadway as the team rushes to release a trapped animal.

“Things do happen,” said Warisa, “and you have to be prepared for anything!”

Earlier that morning, Nucharin and Warisa had shown us how we’d set up the trap array. Unlike the notorious steel-jawed leghold traps that maim legs, these are padded. Nucharin put her hand in one to see what it felt like to be caught. “It doesn’t hurt,” she assured us, “but if it stays on too long, it can restrict blood supply.” A much bigger issue is that dholes panic when captured, and their body temperatures skyrocket – even in the cool of the night. It’s essential that any captured dhole be rescued, cooled down, and anesthetized as soon as possible.

A chain anchoring the foot pad is buried in the ground, and the array of six to eight traps is set out in a circle or semi-circle around a juicy, fresh bait. The traps are all strung with fishing line, connected to a VHF transmitter balanced upright in a tree. Upright, the transmitter sends a signal of regularly spaced beeps. But when any of the traps are sprung, it tips over the transmitter, causing the signal to change to an irregular pulse – at the sound of which, we’ll all spring into action.

Setting up the array can be a time-consuming affair, and everyone pitches in to help. Donning gardening gloves so as not to contaminate the site with our scent, we grab trowels to flatten the ground traps. Ronglarp affixes a camera trap to a tree just opposite the array. One of his grad students struggles with Roger Wood, one of the Earthwatch volunteers, to create a workable platform on the tree trunk for the telemetry transmitter. It needs to stand upright until triggered, but it keeps falling over. Finally, the problem is solved by shoving two sticks under an extra zip tie. Field science thrives at the confluence of sophisticated electronics and good old fashioned MacGyvering with what’s lying in the dry leaves on the ground. 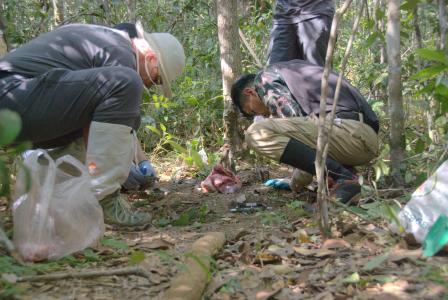 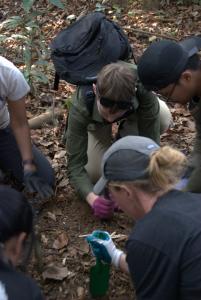 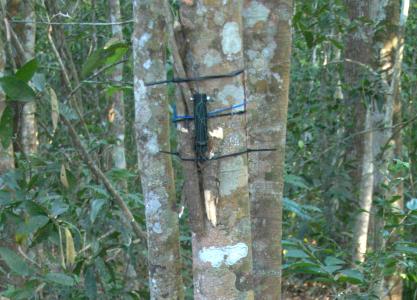 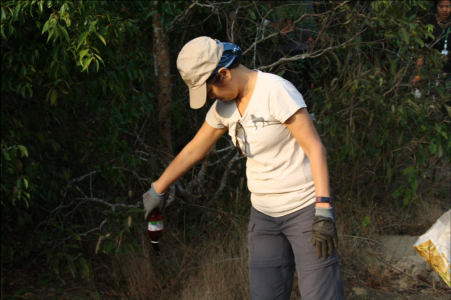 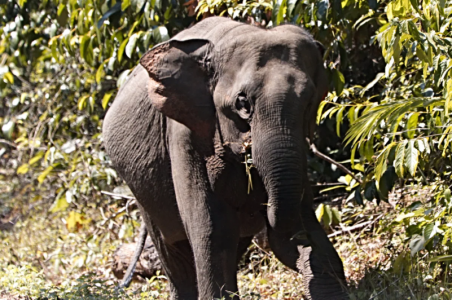 By the end of the day, we’ve set and baited traps at three locations: one array near, but not at, the old den; another set at a site near an old golf course; and a third at a dry waterhole at a trail called Nong King, a place where the team has trapped and collared dholes successfully in the past. A fourth site, near a reservoir where bridal couples often come for wedding pictures, might be added tomorrow.

We’ve left the dholes what we hope is an enticing banquet: fresh pork sits in the middle of the hidden traps like a Thanksgiving turkey on a holiday table. Nucharin backs away from the site, pouring out of a plastic bottle a trail of pig blood like a red carpet.

We’re all eager to get the party started. But for now, all we can do is wait.

This is Sy’s third post in her series from Thailand. Check out the first, “Worlds Between Worlds,” and second, “In the Land Where Deer Bark and Dogs Whistle,” to learn more about her experience!