In Playa Grande, Costa Rica, more than 20 years of egg poaching consumed a generation of leatherback sea turtles. Today, Earthwatch scientists and volunteers are working alongside local communities to ensure there’s a future for this species.

When María Teresa Koberg first arrived in Playa Grande, Costa Rica in the late 1980s to study nesting sea turtles, Doña Esperanza Rodriguez was concerned. At the time, Playa Grande was the most important nesting site worldwide for leatherback sea turtles, but it was also a dangerous place, particularly for a researcher. People were arriving on the beaches from all over the country to harvest eggs from the turtles’ nests, and Esperanza and her family were involved in managing these efforts. Villagers had begun using sticks to separate the sand into territories. Some people brought machetes and cutachas (smaller blades) to defend their sections of the nesting grounds. Fighting amongst the hueveros—the egg collectors—had grown violent, in some cases even resulting in deaths. Esperanza knew that María Teresa’s life was in danger. 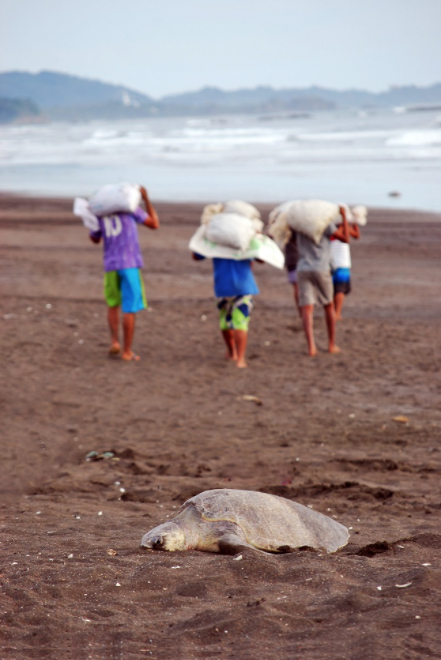 To ease her concerns, she decided to accompany this strange young woman on her nightly beach patrols. Each evening, she left her family at home, including her four children, to meet María Teresa for her sea turtle surveys. María Teresa carried a pitcher of coffee and several plastic cups, which she offered to the egg collectors as she spoke to them about her efforts to monitor and protect the nesting turtles. When the coffee was finished, the two women began the counts. Side by side, they walked on the sand for hours, counting nesting leatherbacks and recording how many nests of eggs had been laid, as well as how many had been harvested.

In the late 1980s in Playa Grande, sea turtle egg poaching was rampant, with little to no enforcement by the police. “In those times there was no law,” said Esperanza. “I could walk by the policemen with a sack [of eggs] and they wouldn’t do anything to me.” Leatherback sea turtle eggs were an important source of income for local communities. The eggs were purchased right off the beach and transported by truck to San José, where they were sold in the markets as an aphrodisiac. These eggs also served as a source of protein for local families.

Over time, as María Teresa and Esperanza walked the beaches counting turtles and nests, they developed a friendship. María Teresa taught Esperanza about the life cycle of leatherbacks, whose evolutionary roots date back more than 100 million years, and about their role within marine ecosystems. Ultimately, Esperanza came to understand what poaching in this critical nesting grounds meant for the future of these turtles.

Yet, this was her livelihood.

I would go because I liked to accompany her, because there were a lot of people on the beach taking eggs, and because she would have been alone with that coffee. 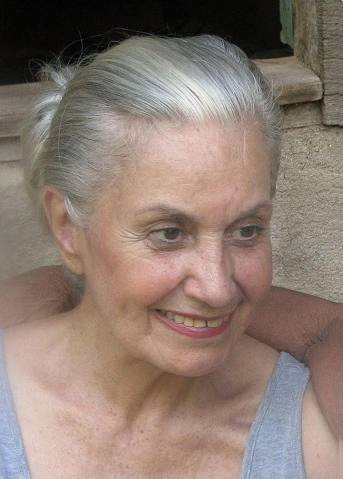 María Teresa knew she needed support—not only to protect the turtles, but to collect the massive quantity of data she needed to demonstrate what an important nesting site this was. At the time, Playa Grande was easily the largest nesting site for leatherback turtles that had been discovered in the world. But without these data, it would never receive the protection it urgently needed.

Across the country in Tortuguero, biologist Dr. Frank Paladino was studying leatherback sea turtles when he received a call from Dr. Mario Boza, Costa Rica’s Vice Minister of the Environment. Mario explained that his assistant, a woman by the name of María Teresa Koberg, had discovered the largest nesting site for leatherbacks in the world, in a place known as Playa Grande.

In Tortuguero, we were finding one nesting leatherback about every two miles. María Teresa was reporting 100 leatherbacks within that same radius. It was kind of like the elephants’ graveyard—we didn’t believe her.

Despite his doubts, Frank planned a “side visit” to Playa Grande during a research trip to see the turtles for himself. Sure enough, on the first night of his stay, more than 100 leatherbacks emerged from the ocean, slowly crawling onto the beach to lay their eggs.

In the morning, however, the beach was vacant—nearly every egg had been stolen from its nest. Scientists estimate that between the 1970s and the early 1990s, poaching consumed 90% or more of all of the sea turtles eggs laid on that beach. An entire generation of sea turtles, lost. 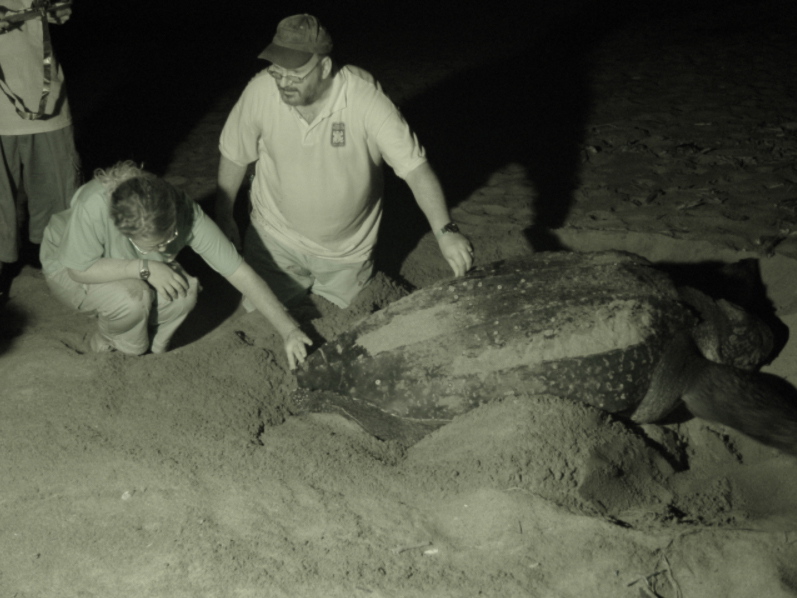 When Frank first heard about Earthwatch, he knew it was the perfect fit for this project. Not only could Earthwatch volunteers help his team to collect the massive amount of data they needed to develop protective legislation for the nesting leatherbacks, but the consistent presence of citizen scientists on the beach would deter people from harvesting the eggs.

In the early 1990s, the first Earthwatch team arrived in Playa Grande to join what is now known as the Costa Rican Sea Turtles expedition—one of Earthwatch’s longest-running research projects. The initial data collected by these research teams were used to convince the Costa Rican government to turn Playa Grande into a national park (Parque Nacional Marino Las Baulas), thereby establishing federal protections for the sea turtle nesting site and many of the other nearby habitats.

But not everyone was convinced this was the right decision.

Esperanza felt that we were going to take things away from them. That was her livelihood for her family.

María Teresa worked closely with Esperanza and other local community members to help them to understand how this park would benefit them. She ensured that Esperanza received compensation in exchange for collecting data and supporting the research team’s efforts.

Over time, many of the residents of the towns that abutted the park signed up to become park guides, including those who were at one time involved in poaching activities. Today, they earn more working as guides than they did harvesting eggs—a win-win for the research team and the community. Together, they have helped to secure a future for leatherback sea turtles.

An olive ridley hatchling makes its way to the ocean. 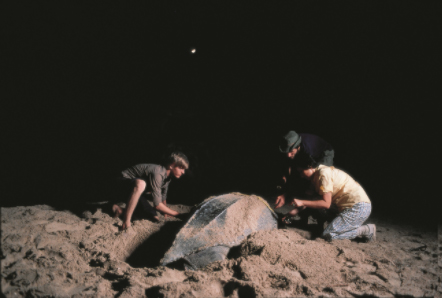 On the Edge of Extinction

Dr. Nathan Robinson is currently the lead scientist of Earthwatch’s Costa Rican Sea Turtles expedition. For the past seven years, Nathan, who was formerly one of Frank’s doctoral students, has led teams of Earthwatch volunteers in Playa Grande to collect data on nesting leatherbacks and other species, contributing to what is now one of the longest-running databases that exists on Pacific marine turtles.

The data collected points to an uncertain future for leatherback sea turtles. Since the early 1990s, there has been a significant decline in the numbers of nesting turtles in Playa Grande. From 1990 to 1995 alone, the numbers of nesting leatherbacks dropped from 100 turtles per night during the nesting season to 40 per night. This year, over the course of the entire nesting season, there were 12.

More than twenty years of egg harvesting has decimated the population. Not only that, when the Costa Rican fishing industry adopted long-line fishing practices, older female turtles were caught accidentally as bycatch. So not only were the adults were being killed off, egg poaching was also ensuring that there weren’t any juveniles to replace them. As a result, the population crashed.

Fluctuations can happen naturally due to El Niño, but usually you see a recovery. In this case, there hasn’t been a recovery. Quite the opposite. 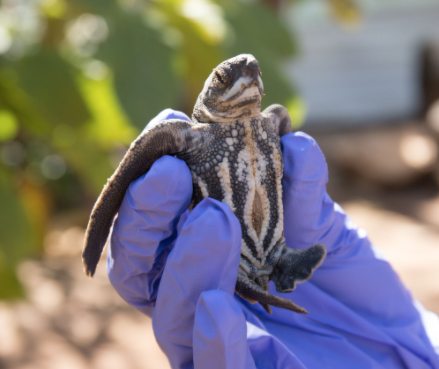 Join Us and Save This Species

For the research staff, for the park guards, for the Costa Rican government, and for Earthwatch, the time is now to renew and fortify efforts to protect the few turtles that remain.

To find our more about this research effort, visit Earthwatch’s expedition page. For questions or comments related to this story, please contact communications@earthwatch.org.