This June, Earthwatch Science Writer Ashely Junger returned from her first expedition: Conserving Endangered Rhinos in South Africa. She shares her experience driving through the African bush and observing white rhinos while helping to conserve and protect this iconic species.

Before me, a sea of beige grass swayed across an expansive undulating landscape, occasionally interrupted by trees and shrubs. As I zoomed through the misty fall morning, I passed a cluster of warthog barely visible in the underbrush. A bird fluttered onto a single piece of grass, bobbing with the wind. A black-backed jackal watched me pass a few feet from the road.

Regina, one of the other Earthwatch volunteers, banged on the roof of the white pickup truck and we came to a stop in the middle of a one-lane, red dirt road. Seven sets of binoculars rapidly scanned the surrounding grassland and shrubs.
“There! Between the crooked tree and the big bush.”

Over the top of the grasses, the hunched shoulders and sloping back of a white rhino were just visible.

“Okay, team. Time to do an observation,” Lynne MacTavish, the operations manager of the reserve, called as she climbed out of the cab of the truck, fixing her binoculars on our first spotting of the day. “Looks like we found Reine.” 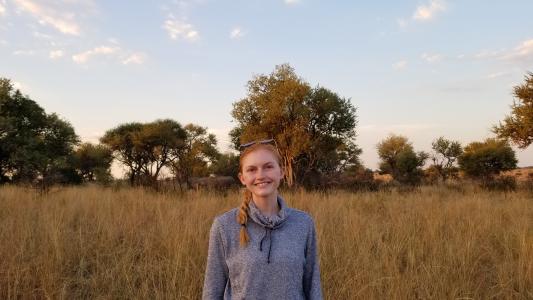 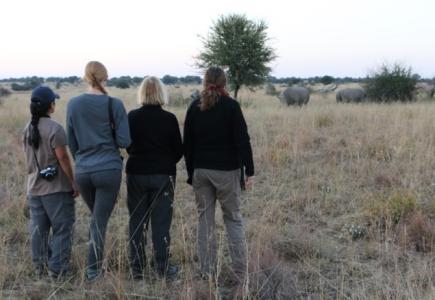 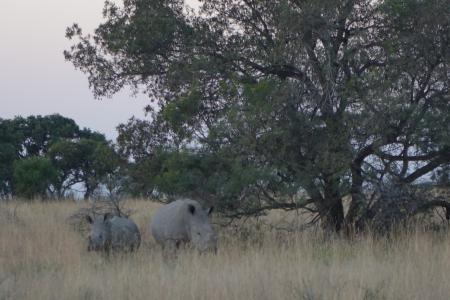 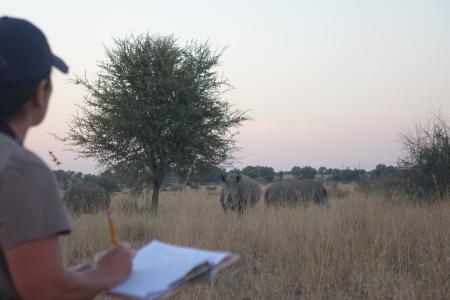 I pulled out the GPS, rangefinder, clipboard, and compass and handed them out to the other volunteers. Regina volunteered to serve as scribe, calling out for our first set of data: “Start time?”, “Distance?”, “What’s the angle?”, “Behavior?”

“Foraging,” I called in response.

I had my binoculars trained on Reine, my whole field of vision a long black tunnel encircling the enormous gray back of the rhino. I sat like that for an hour, never taking my eyes off her. I watched her slowly move forward, ripping up and chewing grasses as she wandered. I lost myself and my surroundings. There was no truck, there were no volunteers, and there were no binoculars. There was just Reine, trying to satiate her enormous hunger.

From the moment we saw her, each second of Reine’s movements were accounted for over the next hour. Each lift of her head, each time she stopped foraging to walk, each time she moved behind a bush, it was documented by our team.

You wouldn’t think that sitting and staring at a gray lump walk through grass would be exciting, but it was one of the most engaging parts of my experience. We had a rhino spotting every day I was on the reserve, and whether it was the first spotting or the 20th, each time there was the same elation in the voice of the volunteer who spotted them, and the same breathtaking excitement at seeing such a massive animal peacefully munching through the African bush.

Watching them so closely for so long, you start to notice their different personalities. One rhino reacts to every bang and bump from the truck, stopping to stare. Another rhino couldn’t care less about the humans observing him and never looked up once. Another rhino decided to retreat to the bushes and wait until the humans were out of sight before continuing to forage.

When we set out to spot rhinos, we knew we were setting out to collect data and help protect this threatened species, but when you’re out in the field it doesn’t feel like work. I felt small and a little bit intrusive, spying on these creatures while they went about their business. I felt inexpressibly lucky to not only have the opportunity to see this rare species within its own habitat, but to spend so much time so close to them. Lynne describes being close to and working with the rhinos as a spiritual experience, and it’s not hard to understand why. It’s one thing to see a rhino; it’s another to know that a rhino sees you.

The African rhino is one of the iconic animals in Africa’s “Big Five,” the most famous and sought out species on the continent. And while they’re one of the most recognizable animals in Africa, they’re becoming harder and harder to see. Researchers estimate that over the last 116 years, 94.5% of the world’s rhinos have been lost. Today, South Africa is home to nearly 80% of the world’s remaining wild rhinos, with a population of just over 18,000 white rhinos and almost 2,000 black rhinos.

Of those remaining, 45% are protected on private reserves, like the one I visited as part of the Earthwatch expedition Conserving Endangered Rhinos in South Africa. These reserves usually house a wide variety of African wildlife, but rhinos are often the most challenging to manage. Not by any fault of their behavior – rhinos spend a good portion of their time simply foraging for grass, but because of the increasingly high threat of poaching, which requires reserve owners to very closely manage their rhinos and spend tens of thousands of dollars to protect them.

Poaching has exploded in the last decade in South Africa, rising over 8,000% since 2008. That translates to an estimated 7,600 rhinos losing their lives in the last decade. This poaching crisis stems from the demand for rhino horn as an ingredient in traditional Eastern Asian medicine and as a status symbol. Despite the fact that rhino horn is made of keratin – the same protein that forms the hair on your head and the nails on your fingers and toes– it is more valuable than gold; one kilogram of rhino horn sells for approximately $65,000 on the black market. 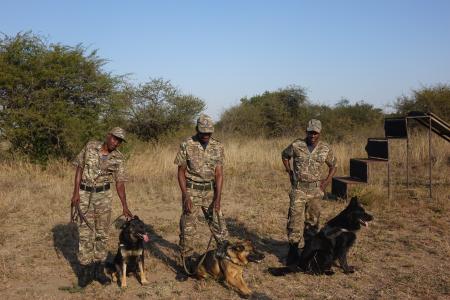 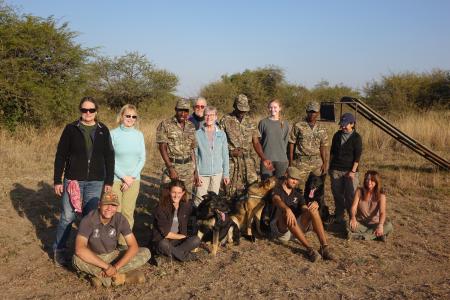 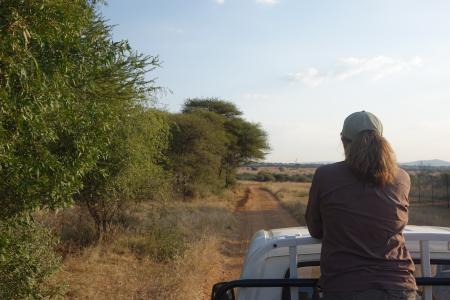 And since 2014, when the poaching crisis came to Lynne’s reserve, she and her teams of researchers and volunteers have worked diligently to ensure that none of her remaining rhinos fall victim to the same horrible death. Some of their new protections include trimming the rhinos’ horns and adding a full-time anti-poaching unit to patrol the reserve. Another protection is the teams of Earthwatch volunteers who travel from across the world to help Lynne and her team collect data that informs best management practices for the rhinos. Additionally, the presence of additional people on the reserve helps to deter poaching.

My team spent most of our time driving through the reserve, looking for rhinos so we could record their location and observe their behavior. This information will help the reserve management determine where the rhinos spend most of their time and what factors affect that distribution, which will allow them to more efficiently protect the species going forward. Lynne has worked on the reserve for over 20 years and can tell you each of the rhino’s personalities. She knows white rhinos like she knows the back of her hand, but the data collected isn’t just for Lynne and her rhinos; it’s to help all white rhinos on any reserve. “When you can prove something scientifically, you have a lot more power,” said Lynne.

One evening, the other volunteers and I bundled up and drove into the blackness of the midnight reserve, mainly hoping to spot some of the nocturnal creatures. But, as an added bonus, we were also increasing the human presence along the fence line at night – hopefully scaring away anybody scouting the reserve for poaching. Halfway through the drive, we stopped to stare up into the sky.

My head was titled all the way back. Above me, a smoky gray smattering of pale stars ran diagonally across the sky, the Milky Way. Within the overlaying brighter sprinkling of stars was Venus, a brilliant pinprick. Complete silence in the complete blackness, interrupted only by the sound of a lone wildebeest running through the grass behind us.

Two bright headlights split the darkness. The rumbling truck was carrying the reserve’s anti-poaching unit. A few men, outfitted in camo with two attack dogs laying under the benches. These men patrol the reserve each night, keeping a vigilant eye for people trying to break into the reserve to poach animals. When we were usually bundled up in our sleeping bags, snoozing back at camp, these men were out in the freezing cold, keeping a vigilant eye over the diversity of life protected within the reserve. 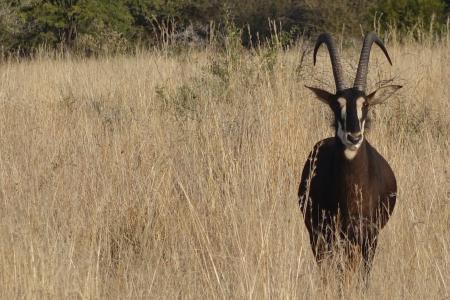 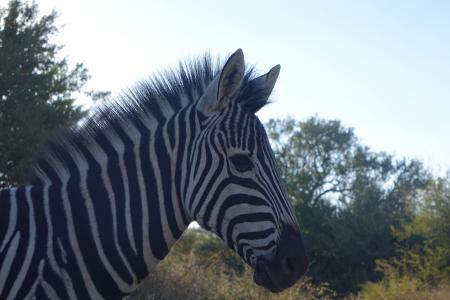 And now, when I’m home in bed, I think about them, out in that freezing silence, looking and listening. Through the trip, I developed an unexpected bond with rhinos – I’d always thought they were interesting creatures and was excited to work with them, but seeing their personalities first hand, feeling their breaths, hearing the passion and pain in Lynne’s voice as she spoke about the sacrifices necessary to protect them, it hits you in a way you don’t expect.

It sits in your brain and you think of rhinos at night in bed. You’re so used to scanning the horizon for their outlines that you think you see them on city blocks. You miss spending hours sitting next to them. And you wonder if there will still be wandering white rhinos to observe the next time you travel to South Africa.

Over the 12 days on the project, my team and I recorded 12 behavioral observations (a total of 5 hours and 22 minutes), recorded 21 rhino locations, collected 4 fecal samples, walked one transect (0.86 miles), set up 12 camera traps in 6 locations, and helped trim the horns of four rhinos. During our observations, rhinos spent most of their time foraging (45%), walking (21%), standing (18%), or watching us (11%).

These numbers summarize the data we collected, but they don’t come close to conveying the experience of collecting that data. Each day was a mosaic of fieldwork, animal spotting, and lectures. The tiny pieces of the landscape I saw were breathtakingly beautiful, more full of life than I could have imagined, and infinitely complex. 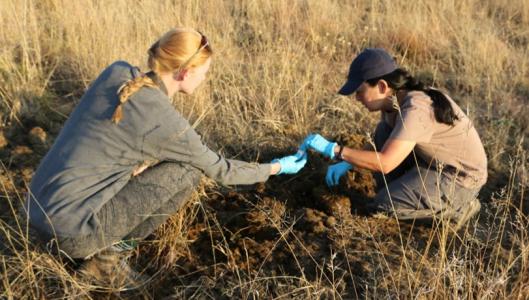 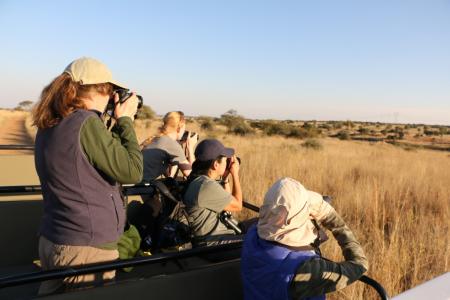 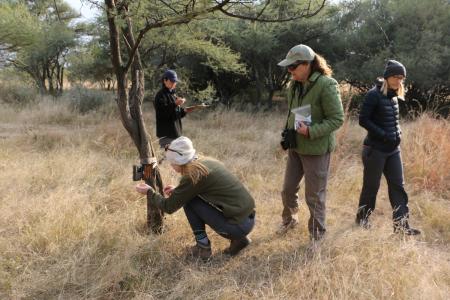 On this trip, I experienced things I never knew I could miss. I heard the sound of dozens of impala hooves crushing the dry grass. I held a dry and surprisingly light ball of rhino dung in my hands, a micro-universe of ants and beetles already at work inside. I stared at a rhino bull while it stared back at me. I’ve sat silent as birds and jackals and I don’t know what else called in the distance.

Rhinos’ evolutionary story spans over 30 million years. Today, five species of rhino exist, three of which are critically endangered. The rhino has had a long history full of challenges and adaptations, but it now may be facing the end of that story, obstacles it cannot overcome. I know me and my fellow volunteers’ time with Lynne and her team have helped contribute valuable data that will be used to conserve and manage their remaining rhinos. I hope that contributing data to the understanding of this iconic species will help strengthen conservation efforts, and I hope that one day I can return and sit with wild rhinos again.

To read Ashley’s thoughts in advance of her first expedition, and also her first time traveling alone, read her blog post: “Embarking on my First Trip as a Solo Female Traveler, Thanks To Earthwatch.”