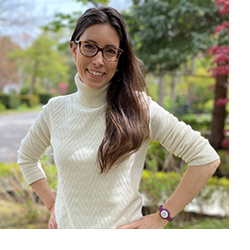 We are excited to introduce the new lead scientist of Earthwatch’s Operation Healthy Air program, Dr. Krystal Pollitt. Operation Healthy Air partners directly with community members and local institutions to monitor air quality and help take action to reduce exposure and emissions. Dr. Pollitt is an Assistant Professor of Epidemiology, and Chemical and Environmental Engineering at the Yale School of Public Health. Her research examines the impacts of air pollutant exposures on human health outcomes and disease, particularly among vulnerable populations. In collaboration with Earthwatch, Dr. Pollitt has conducted air quality research across the United States, Europe, Australia, and India.

Earthwatch's Jon Gorey, spoke with Dr. Pollitt about the value of studying hyperlocal air quality, how air pollution relates to personal and public health outcomes, and why she chose to partner with Earthwatch

Why is air quality such an important issue to study?

Air is a resource that we take for granted. We're breathing it in, and during COVID people are starting to notice that not all air is good air, even if they are living in good air quality regions. The need for masks changes your perspective on what it means to have clean, fresh air around you. That's really been the motivation for understanding what air pollution means in terms of quality of life and in terms of health. The burden of disease that is associated with poor air quality is huge, especially when you start to move to low- and middle-income countries, or in regions of exposure disparities across the US.

What impacts air quality at the household level? And what kind of impact does that have on the individuals living there?

I work in a lot of rural regions within South Africa, studying children and their exposures, as well as rural communities in Mysore, India—wherein both of these cases, you have the use of indoor biomass combustion with cook stoves. Once we view all the different chemicals that make up [household air pollution] people can start to look at some of those combustion-related elements. What we've been able to see, using these wearable Fresh Air clips, is that it's a lot more than just the traditional combustion products—[chemical exposure] also comes down to what people are burning. And that's raised a lot of alarm bells for us. People are burning plastics; they're burning finished wood products that have flame retardants and other plasticizers on there. And now we have these massive endocrine-disrupting chemicals that people are being exposed to that we didn't previously acknowledge to be there. Think of young children, right beside their mothers or other female family members that are cooking dinner for extended periods of time in small enclosed environments, and what that means for their development. The repercussions are absolutely huge.

What are some of the most alarming findings you’ve uncovered in your research?

The problem of the treated woods and the plastic combustion was alarming. The levels of these plasticizers, phthalates, that we've detected in India and South Africa—that's probably one of the most alarming outcomes.

We've also been able to detect pesticide exposures. We found banned pesticides that were still commonly used within an urban Chinese population that we worked with. There was this one [pesticide] that was being used for mosquito control. An older adult population had historically always placed this steel [mosquito] control strip under their beds. And it was there in all of our samples because despite it being banned, its use was the cultural norm. It was quite alarming to be able to detect those substances.

How important is it to have data to help you make your case when you approach a community?

To follow up on the Chinese example with the mosquito control—[data allows us] to be able to say, “we can detect this, this is the level that we see, and this is a level that we know to be harmful”. And similarly with other cultural norms, [for instance] with different cleaning products, to say, “we know that you like the smell of this and you have become accustomed to [it], because it is what you perceive to be clean, but this is what we're actually seeing in terms of your exposures and we know that these elements are toxic”. And we [also] know that they're going to potentially create issues with long-term health, especially if there are children or other vulnerable populations living in those environments. That's the quantified value. We're very careful on how it's presented and communicated, but to have that [data] does reinforce the message.

What are some of the health hazards that people face in the United States from exposure to air pollution?

Many of the chemicals [from industrial activity and traffic] are measured as EPA criteria pollutants. Those are well regarded to have numerous different health outcomes from respiratory disease, cardiovascular disease, cardio metabolic diseases, neurological outcomes, developmental issues, reproductive outcomes, I mean, the list goes on and on. There are a number of risk factors there and potential adverse issues.

Being reactionary in response [to air pollution] is incredibly frightening to me, and the ability to be proactive and introduce preventative solutions is where I think the partnership with Earthwatch is really impactful.”

What are ways we can address the public health issues caused by air pollution?

Being reactionary in response is incredibly frightening to me, and the ability to be proactive and introduce preventative solutions is where I think the partnership with Earthwatch is really impactful. The ability to communicate this type of information can go very far in terms of community level engagements, [and] from this bottom-up approach—[providing] personalized [and actionable] interventions. Additionally, offering interventions at the manufacturer scale—working with industry that can push for electrification and significant infrastructure changes will also lead to meaningful differences in the health outcomes associated with air pollution.

What do you hope to achieve through your work with Earthwatch?

I think it's meaningful to understand how exposure varies internationally, between different communities—to get a sense of just the diversity and magnitude of exposure that we see. Our engagement with Earthwatch is letting us push into new locations and create different partnerships with the local community. In addition to working in the US cities, we’ve expanded into four European locations. That's really broadening our ability to understand what exposure means and how we can than think about what health is, [as it relates] to all these similar types of exposures we're measuring.