The Power of One to Transform the Lives of Many

Here at Earthwatch, it’s my job to help teachers organize research expeditions for their students during school breaks. You might think the most gratifying part of my job is getting to go on the expeditions once or twice a year. That’s what I thought it would be when I took the job! It turns out, working with the passionate, dedicated, inspiring teachers and students of New York City public schools far surpasses that joy. Teachers like Carol Wang-Mondaca and her students at Martin Van Buren High School in Queens. Their story is about “the power of one to transform the lives of many.”

“Do you remember your third-grade teacher? Who will remember you?” Carol was riding the subway on the way to her office job when she read this phrase on an advertisement for the New York City teaching fellowship. Carol was a product of the New York City public school system and went on to college at one of the SUNY campuses. Carol called her husband that day to tell him she was going back to school. Truly. 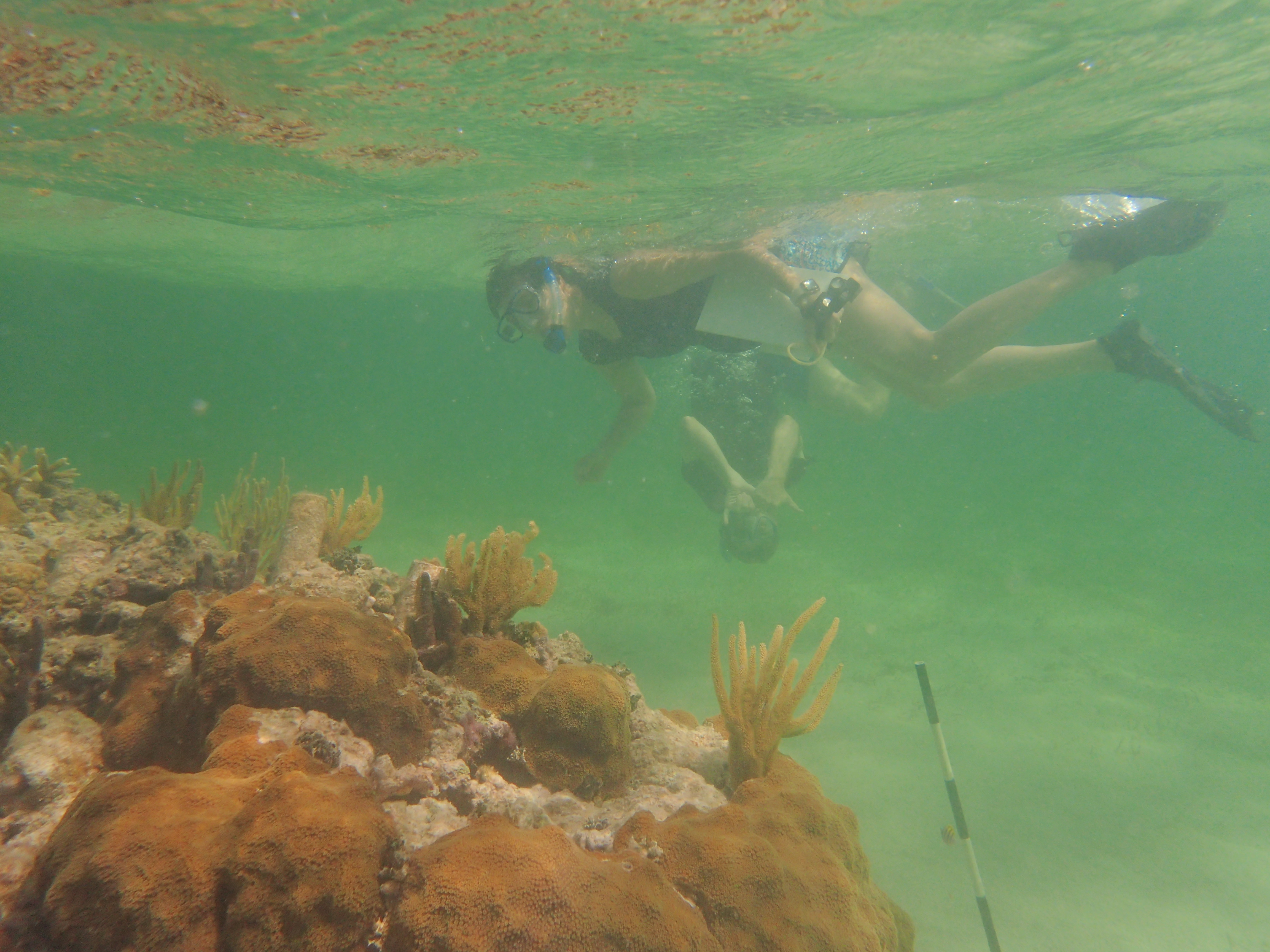 Fast forward 15 years to 2018. This is when I met Carol in the Cayman Islands with the Earthwatch teacher fellowship program Project Kindle. Carol was one of just eight teachers selected from New York City public schools who were given the opportunity to reconnect with field biology. The teachers spent a week in the field, working alongside researchers studying the resilience of corals while also learning how they could plan and execute similar field trips for their students. Despite her school’s success in improving its graduation rate during her tenure, Carol admitted that when she applied to the fellowship, she was losing hope in her vocation:

I was in my 15th year, I was disheartened and uninspired. I felt like I couldn’t teach anymore. I needed to inspire others, I wanted to feel like my impact mattered. It was the research aspect of Project Kindle that I was like ‘Holy Moly! That’s what I forgot about!’ When I got back, I told my school I wanted to teach another class so I would be exposed to more students. I found my way again, I lost my way because I wasn’t with the kids and wasn’t feeling like I made an impact on them.

The first night of the expedition, we did an icebreaker – the silly kind where everyone takes a bunch of toilet paper from a roll without being told why and then has to tell everyone interesting facts about themselves… anyway, it doesn’t matter! But stay with me.

I shared the story of Project Kindle’s anonymous donor. In high school, the donor had the same unique opportunity to join an Earthwatch expedition in high school and was now paying it forward to the next generation. For years, the donor-funded scholarships for students from his own alma mater to join an Earthwatch expedition each year. When the idea for Project Kindle came up, the donor took a chance – what if we sent a full team of teachers who would pay it forward by organizing their students to join an expedition? The impact would be exponential!

This story stuck with Carol. “By the end of the trip, I knew I had to pay it forward.” 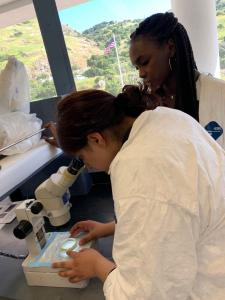 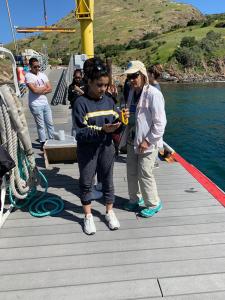 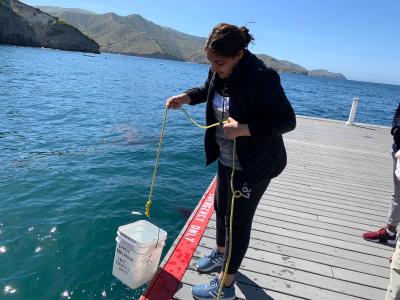 When Carol got back to school, her challenges in making a trip a reality were far from over as she faced what she said was a “lack of experience in actually organizing one and that a trip like this would be cost-prohibitive for the large majority of my students.” Until this point, she had never organized an overnight trip for her students or tackled this kind of fundraising challenge.

Martin Van Buren High School is a Title I high school, meaning its students are from high poverty and low-income backgrounds. Several of Carol’s star-students’ families had suffered major tragedies, and many did not have the support of one or both of their parents at home. Having grown up in Queens herself where she attended the rival public school, Carol felt responsible to give her students the leg-up she never had. “I never knew about these opportunities. No one ever said ‘here do this, expand your horizons.’ I felt like I was at a disadvantage and there was no way I was going to let my kids have that disadvantage.”

The year Carol planned to take her students on an expedition, Earthwatch was splitting a scholarship fund between several schools, leaving her with a $5,000 start. This barely took a dent out of the program cost, airfare, gear, and swim lessons she was budgeting. Staring down a seemingly impossible fundraising goal, Carol was nevertheless undaunted. “When I got back, I was inspired. I felt the will and the desire to go was stronger than all the obstacles,” she said. “That’s how strong of an impact Project Kindle had on me. It was one of those ‘what have I got to lose’ moments. If I don’t give it a shot, it would never happen.” Carol quickly sought help from the people she knew best understood her “pay it forward” mindset.

It started with her husband who took endless trips to Costco to buy supplies for snack sales to raise money, expanded to her assistant principal who found an early promise for funding from the school, to her fellow teachers and friends, to the most passionate deserving students, to her union rep who found a grant, and then to an immensely generous alumni of the school who pushed them across the finish line. Carol took the mindset of the donor who paid for her Project Kindle expedition and had now become the one who transformed many! 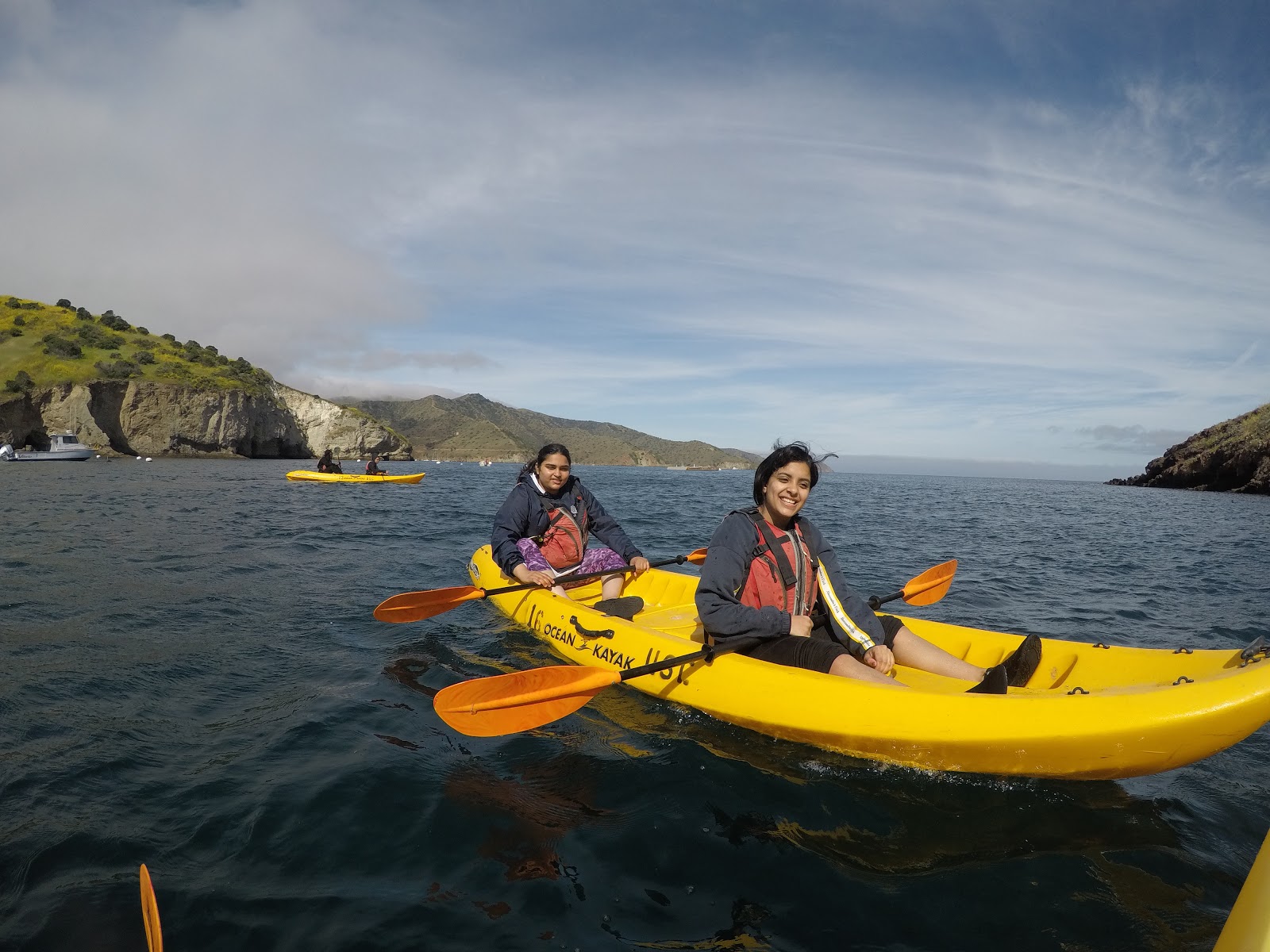 I should stop here. Carol is amazing, and she inspires me every day. But she insists everyone knows that she doesn’t want this to be about her. In fact, I had to fib a little bit when interviewing her because she was uncomfortable with me making this story hers. For Carol, it is all about the students. They are the inspiration, the driving force for her to do more.

Many of Carol’s students faced adversity that would make you cry, but nevertheless, they push forward, they work hard, and they make plans for their future. When Carol first sent out the application for participants, she was stunned. “A lot of them haven’t left their neighborhood. That is frightening.”

Can you imagine the courage it would take to travel for the first time? Now compound the anxiety of travelling away from home with the standard anxiety of being a teenager, of packing, of getting on an airplane, and swimming. It sounds simple, but swimming was a huge challenge on its own. Typically, New York City schools don’t allow any swimming on school trips after past drownings, and likely because many students never have easy access to a pool in the city. Carol had learned to swim just nine years before for her health, and now she had to enroll a whole group of students in swim lessons at the YMCA. Carol remembers revisiting her own nervousness about learning to swim when the students first got in the pool. “The kids were at varying levels, some were good and some were petrified of water, and I was sweating because I was watching from the poolside, wanting to keep them company.” 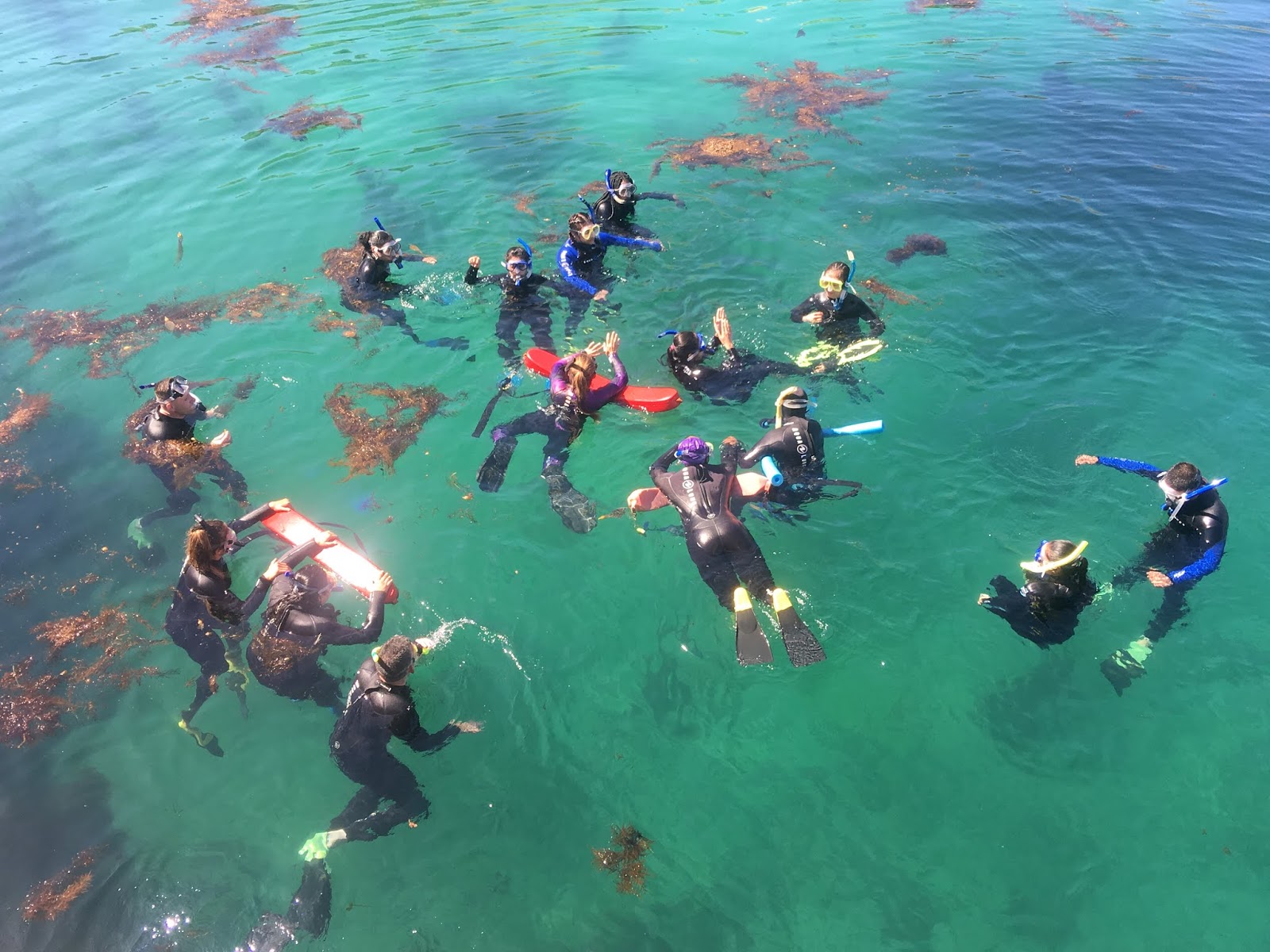 Once the swimming was conquered, it was time to get ready to go. Just before every trip, we have a final “Bon Voyage” call with everyone, and look back at all the hard work they’ve accomplished – all before even getting into the field! It’s hard not to wonder “will the experience be worth it?” In this case, the answer was a resounding “YES!” Carol reserved next year’s dates with the scientists at USC’s Catalina Island campus before even leaving the trip.

“There was a pivotal moment at the beach on the last day when the students had a couple hours of free time and they climbed up a big cliff to see all these coves up the island,” Carol recalled. “You could see that they were touched, and I started crying. I had been telling them, ‘this is what we need to save.’ They knew what I was talking about, but it wasn’t until that moment that they knew what they were trying to save. We tell our kids they are responsible for our earth and limited resources, but that’s meaningless unless they’ve seen it.” 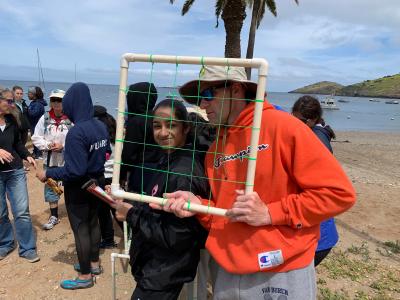 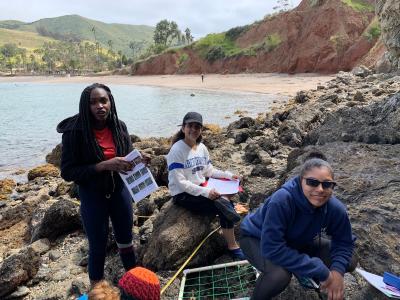 But don’t just take it from Carol. Here are what some of her students had to say about the experience:

“Not only did this trip teach me how to become a better person, but it instilled in me the urge to explore without fear or hesitation. Through these experiences, I’ve learned more and more every day the importance of preserving the ocean and our obligation as humans to help save the animals that reside in it. This moral obligation further fuels my aspiration to become an international lawyer and contribute to the world on a global scale” – Ayana

“It all gave me new insight into what I want to do in the future. Currently, I’m undecided about my career path but after this experience, I’m actually thinking about being a marine biologist. Ever since I was a kid, I wanted to do something that would allow me to make a difference in the world. Now I know that I can do that by studying marine biology. I want to able to teach others about human impact on the environment.” – Fareza

“The biodiversity in Catalina astounded me. Seeing the variety of fish and plant life was an unforgettable experience. Just getting the opportunity to apply the things I learn in the classroom to the world made science even more real for me. As much as you can hear about marine life, it’s still amazing to see it with your own two eyes. This definitely has inspired me to explore more of the unknown marine wildlife and to make strides to protect it.” – Kanza

Imagine if even more students like Carol’s could have this experience?

To help open this exciting opportunity to other high schoolers, consider donating to the Earthwatch Scholarship Fund. With your support, Earthwatch can open up new worlds of scientific discovery.