The Power of Collective Action in a Climate of Despair

With the world increasingly and visibly under siege from a warming climate — drowning in more frequent floodwaters, wilting under hotter heatwaves, or literally on fire — it’s hard not to worry about our future. And as elected leaders continue to turn a blind eye to the planet’s peril in the face of increasingly dire scientific warnings (including a grim new UN report detailing our lack of progress), even the most optimistic among us can start to despair.

If you’re worried, you’re not alone. About four in 10 Americans now consider climate change to be a crisis, according to a recent Washington Post survey. And a study conducted by Yale and George Mason universities last December found that 29% of Americans are “very worried” about climate change, and more than half feel afraid, helpless, or angry. 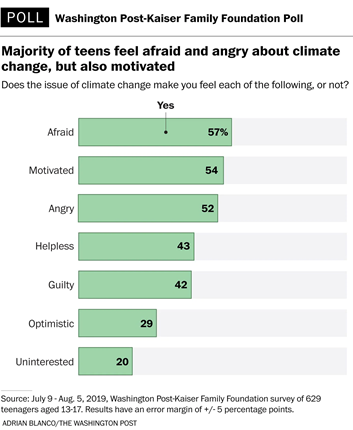 “Despair is natural when there’s objective evidence of a shared existential problem we’re not addressing adequately,” meteorologist and climate journalist Eric Holthaus said in a 2017 Twitter thread. “You feel alone. You feel powerless. You feel like nothing matters. Your relationships suffer. You feel guilty for ‘not doing more.’”

Mental health professionals say such an existential threat can create a psychological burden we’re ill-equipped to deal with. Dr. Lise van Susteren, a psychiatrist in Washington and founder of the Climate Psychiatry Alliance, has likened climate despair to something of a “pre-traumatic stress disorder” — where we can’t extricate ourselves from thoughts of future catastrophe.

That sense of helplessness can be even more pronounced when you recognize that your leaders are failing you, but you’re too young to vote them out. Seven in 10 teenagers believe climate change will cause a moderate or great deal of harm to people their age, according to that same Washington Post poll, and 57% say the warming climate has them frightened. And while 43% of teens surveyed reported feeling helpless, more than half said climate change — and the inadequate response of their elders — has left them angry, motivated, or both.

Climate-aware young people are angry, they are terrified, and they're bewildered that this generation is not taking the action that is clearly needed. They recognize they're being abandoned."

But they’re not abandoning hope, nor their own stake in the future. One in four American teens has participated in a climate-related protest, joined a school walk-out, or contacted an elected official. And those are healthy responses, because there’s truth to what folk singer and activist Joan Baez once told Rolling Stone: “Action is the antidote to despair.”

Young or old, when people are able to redirect their anger or anxiety into constructive action, it can alleviate those stressful emotions, van Susteren says. “That feeling of empowerment, when you run at a problem and you’re dedicated to making the changes that you can, is one of the healthiest ways to deal with any of the emotions that climate change prompts,” she told NPR.

At Earthwatch, empowering people to take action and save the natural world is kind of our thing. For nearly 50 years, we’ve been pairing passionate people with working scientists to conduct hands-on field research in over 130 countries. The hard-won data collected by Earthwatch volunteers has helped shape official environmental policies, conserve threatened species and habitats, and advance the scientific study of climate change.

But joining an Earthwatch expedition won’t just help you channel your concern into meaningful progress in the fight to protect our planet. If you’re feeling anxious about ecological threats like climate change, volunteering with Earthwatch can help alleviate that stress in ways that other gestures can’t.

For one thing, an Earthwatch expedition is demanding work: Volunteers help scientists collect raw data in far-flung natural settings, whether they’re hiking the Pyrenees mountains to observe nests or measuring snowpack in the Canadian Arctic. And physical exercise is proven to reduce anxiety, van Susteren said. “So if you’re engaged in a physical activity, then you’ll reduce your anxiety just from that alone.”

But more powerful still — indeed, it’s one reason so many scientists turn to Earthwatch for help with their research — is that there’s real strength in numbers.

Action that you engage in with a group disproportionately reduces anxiety, van Susteren said, because communal efforts tap into different parts of our brain, making us feel like we’re part of something much bigger. “That triggers a feeling of awe – we forget about ourselves,” she said.

So if you’re doing something to help the planet, van Susteren said, you’ll feel good about it and even relieve some anxiety if it involves physical activity, like picking up plastic on the beach. “But if you’re doing it with a group,” she added, “it brings a special kind of healing.” 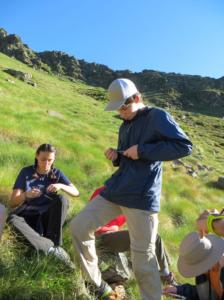 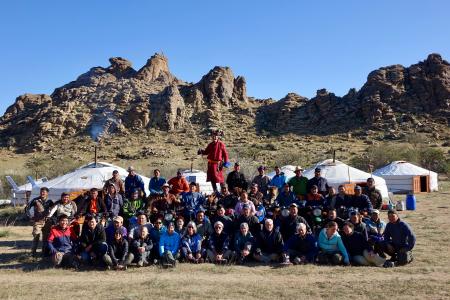 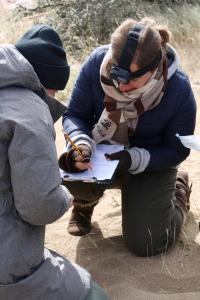 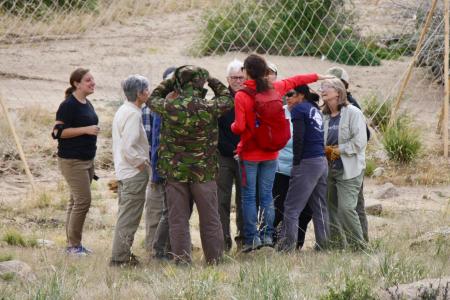 Many Earthwatch volunteers say the people they met on their expedition — the researchers, the locals, and the other volunteers — were the best part of the trip.

Earthwatch’s Climate Change at the Arctic’s Edge expedition in Churchill, Manitoba, often excites participants with its polar bear and beluga whale sightings. But what impressed Chris Deyo the most was the camaraderie. “Being surrounded by smart, energetic, passionate people is a unique growing opportunity that can only happen with a program like Earthwatch,” Deyo said. It’s an experience he would recommend “to anyone interested in making a positive change in the environment, in the world, and in themselves.”

Another Arctic’s Edge volunteer, Maria Fernanda Ayala, gushed about the breathtaking aurora borealis, but also the solace of solidarity. “It’s a wonderful feeling to get to share my ideas and my passion for the environment with people from all over the globe,” she said, “and to finally see that there are so many people out there sharing these views and just waiting to speak their minds and make things happen.”

“I remember staying up late and chatting under the stars with a few team members in India, or our discussions about every topic imaginable in the cars to and from the project sites in Mongolia,” said Amanda Konen, who has embarked on two Earthwatch expeditions and is signed up for a third this summer. “The nicest thing about joining an Earthwatch project is that you know no matter what background you’re coming from, you share at least one thing in common with all the other team members: a desire to protect and preserve our beautiful planet.”

Most importantly, though, taking action isn’t just a self-soothing balm to make you feel better. Your behavior can actually change the mindsets and influence the actions of those around you by setting new expectations.

“People tend to say, ‘Oh, what one person does doesn’t matter,’ and this is entirely false,” van Susteren said. “The choices we make affect the behaviors of people around us — our friends, family, relatives. When they see use engaging in activities to protect the environment, what we call loosely pro-social activities, these behaviors establish what collectively become a social norm — in other words, the behaviors that are expected in this time of crisis.”

Just as panic and despair are contagious, van Susteren added, so are good works. “At heart, we’re a social group, and capturing the herd mentality is an effective way to get the culture to change quickly,” she said.

Whether you’re a solo traveler or a student group, a teen or a retiree, Earthwatch fields an array of research expeditions that can connect you with nature through people-powered science. Join our modern-day conservation corps and discover what it feels like to change the world.

“I hope that my small contribution will help inform the research and make a difference in the Pyrenees,” said Brenda Myers, a participant on the expedition Wildlife in the Changing Andorran Pyrenees. “I know that my time spent there has made a difference in me,” she added. “I came back with renewed energy and commitment to seek out opportunities closer to home where I can make more regular and sustained contributions.”