In Golfo Dulce, Costa Rica, the waters provide a safe haven for humpback whale mothers and their calves. Earthwatch scientist Lenin Oviedo Correa shares why this critical habitat is so important for these whales and the threats they face at the hands of humans.

As a cetacean field researcher, there is nothing more memorable in your behavioral work than seeing yourself reflected in the eye of your study subject, which in this instance was a baby humpback whale. You realize that what is staring back at you is a sentient, curious, highly-social being that also happens to be 20 times bigger than you and will grow to be even larger throughout its life.

Humpback whales worldwide have recovered from near decimation during whaling times. According to some studies, it is estimated that more than 95% of some populations were eliminated during the height of this time period. Due to the inshore-coastal habits of this species, the whales were easy and profitable targets.

So with this miraculous recovery, the species must be safe now, right? Sadly, that is far from their current state, even though humpback whales are currently classified as “least concern” conservation status by the IUCN. The current threat to their conservation is no longer a harpoon. Now, the situation is much more complex, and again, the fact that they are coastal marine mammals is precisely what exposes them to human-related threats. In many cases, we don’t fully understand the extent of the consequences of many of these pressures on their critical habitats, for example the impacts of climate change on their habitat.

Let’s take a closer look at the baby whale of our focus population in the Southeastern Pacific born in Golfo Dulce, our research site in Southern Costa Rica: 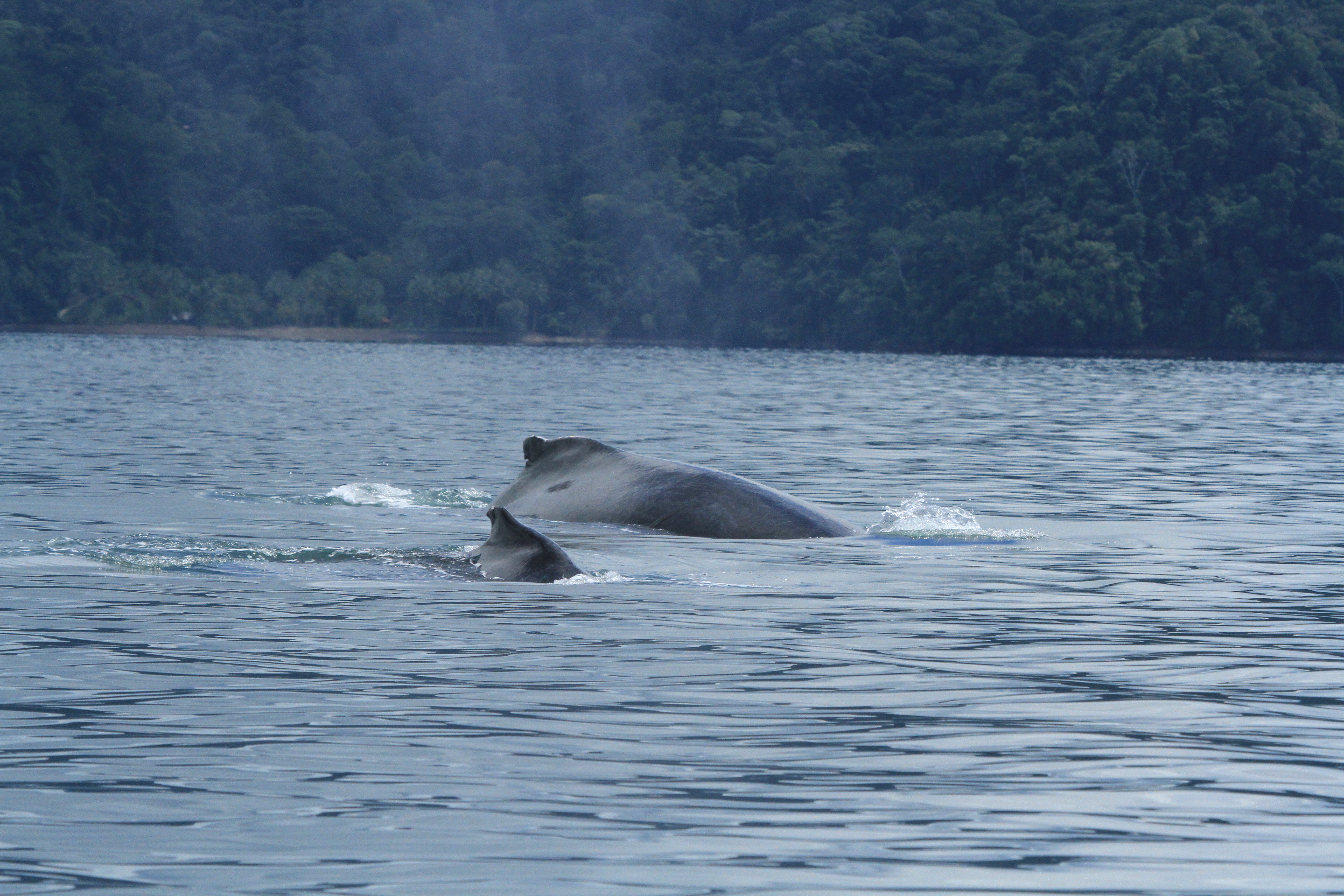 This baby was born in the second week of August in the tranquil waters off Mogos on the northeastern shore of Golfo Dulce. For the baby, these waters would have a particular taste due to the low salinity, a taste that would be so different to the open water of the Pacific Ocean, where in just a few weeks, it will be cruising on the journey south. For the mother, these waters taste like sanctuary. Low salinity is a common feature of the Central America Wintering Area due to the remarkable amount of fresh waters draining to the Pacific shores of Panama and Costa Rica.

This mother-and-calf pair is not alone. Along with them is a third whale, a male. This male is a transoceanic wanderer. A few years ago, he was spotted off Tonga in the South Pacific. This time, the male is fulfilling escort duties in a different tropical area of this mighty ocean, fending off other bachelors seeking mating opportunities, perpetually trying to get closer to momma whale, sometimes too close for the safety of the baby, which could get injured by out of control male pursuers.

The two adult whales transited binational waters between neighboring \Golfo de Chiriqui in Panama and Costa Rica’s Osa Peninsula, but they felt safer inside Golfo Dulce. Perhaps the fjord-like shape of the peninsula reminds them of their preferred feeding ground off Southern Chile, with low salinity and forested shoreline – characteristics of both sites. The killer whales patrolling the whole Eastern Pacific will not follow them to this sheltered bay. 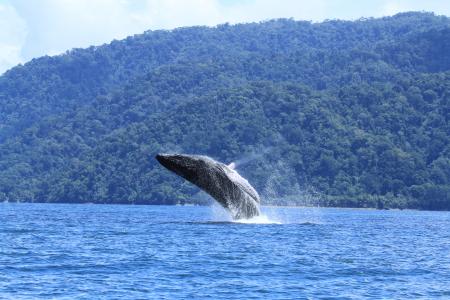 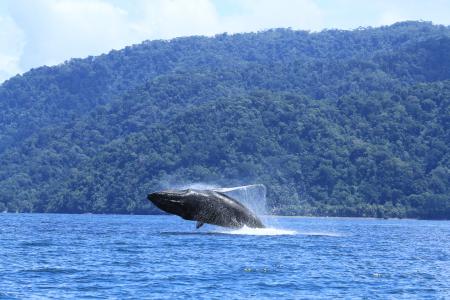 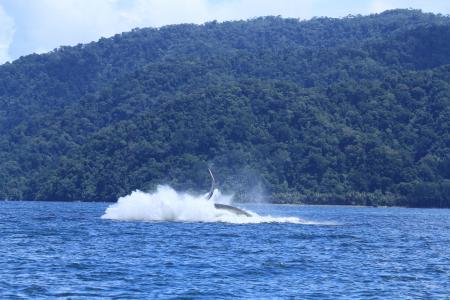 The trio wanders all over the Gulf, interacting with pantropical spotted dolphins, before finally settling down in front of Playa Preciosa, close to the major urban settlement of Puerto Jimenez. These waters present an advantage for the development of the baby – it will gain weight while being more thermally efficient, plus the lack of major currents will help both mother and calf to save energy while nursing. They have finally reached a perfect suitable calving area.

The baby begins wandering farther from mom, curious about the myriad of sounds: from dolphin whistles to deep, eerie, repetitive sounds made by other humpback whales seeking to perpetuate the species. However, very often a deafening cacophony takes over. The baby cannot even hear the reassuring heartbeat of his mother or the escort; that kind of loudness makes the baby feel disoriented and scared. Other baby whales in the area have not been as lucky. As they wandered, loud crashes and collisions with sport fishing boats have injured them – one was hurt so badly that by the next morning, it was dead. That prompted the trio to move rapidly instead of resting at that one sanctuary location.

The baby keeps delaying their advance. Near Cabo Matapalo at the entrance of Golfo Dulce, the baby is mesmerized by a group of pantropical spotted dolphins, desperately clicking and surrounding a young dolphin entangled in long ropes of ghost fishing nets, wrapped around the flipper and dorsal fin. Gentle pushes of the momma whale’s snout signal the baby it’s time to keep going, but now he is curious about a floating plastic bag, even trying to taste it. Fortunately, mom moves the baby away from the lure of the plastic bag, finally moving toward the open tropical Pacific Ocean.

It is time to move. The baby is quite hefty and its dorsal fin is fully furled. It’s time for the first migration south to the Guaitecas Archipelago near Southern Chile, their preferred foraging area. If only momma whale could be certain there would be cool water there. Warmer temperatures mean less food and the need to move further south, the thermal patterns of the water along the route of their migration journey have changed lately… 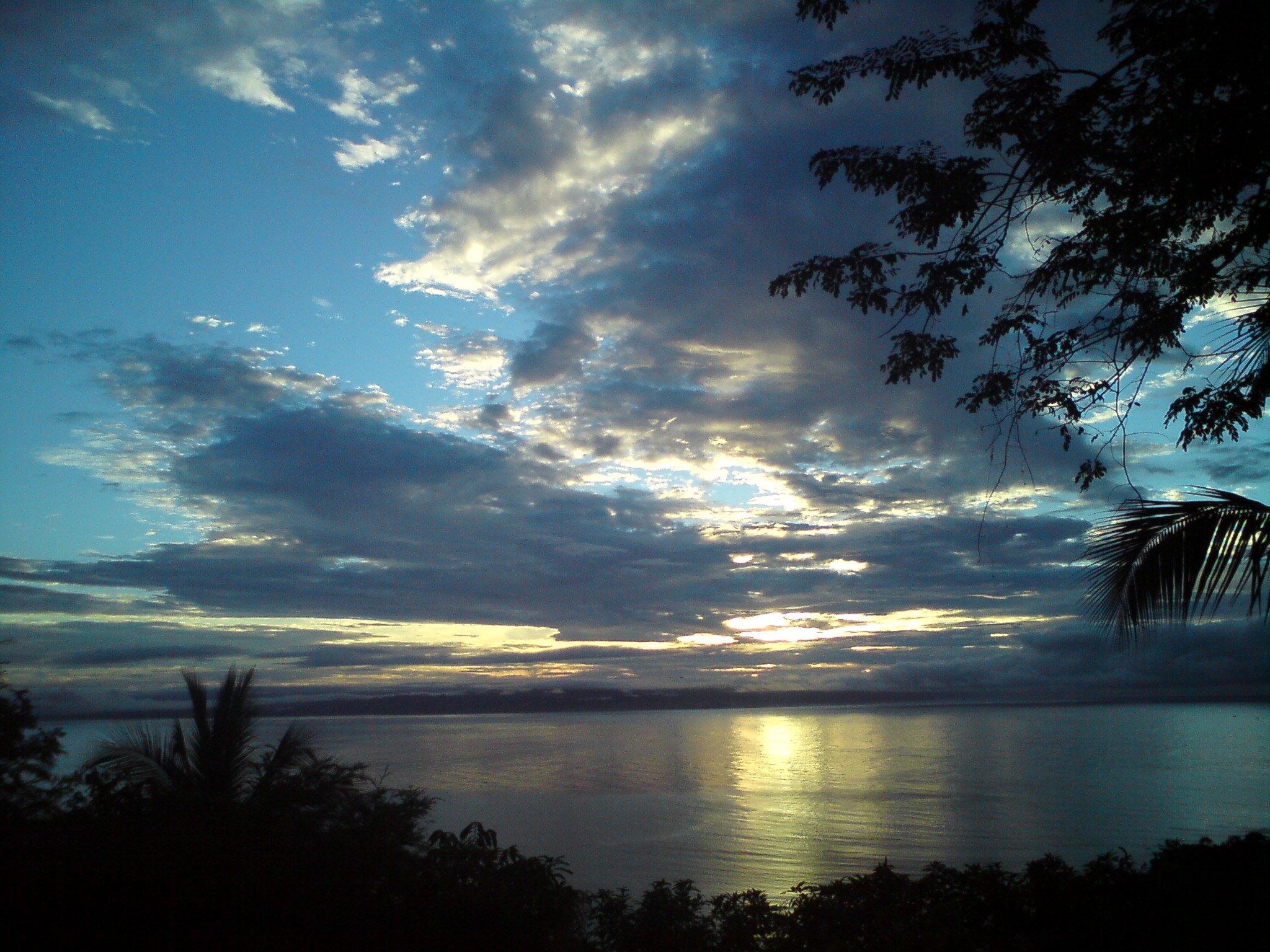 The description above is a fictional reconstruction based on all the data gathered throughout our 15 years doing field observation on Southeast Pacific Humpback Whales in Golfo Dulce and Osa Peninsula waters. Every remarkable fact in the narrative is a behavior record taken with the aid of our Earthwatch volunteers. These records allow us to build up a complete picture of the habitat use of these migratory mammals in our study site. The information also provides the scientific basis – along with recent satellite telemetry data gathered in cooperation with Dr. Hector Guzman (Smithsonian Tropical Research Institute-Panamá) – to delineate and establish a Maritime Traffic Exclusion Zone, a law decreed in May 2018 which protects all the calving critical habitats of Humpback Whales in Osa Peninsula-Golfo Dulce. Certainly a huge step closer to our aim of a full Marine Protected Area.

It is worth highlighting the detrimental effect of the current threats, the new “explosive harpoons” are apparently harmless, yet equally deadly to those used in the peak of the whaling era. Plastic and ghost fishing nets can increase the likelihood of entanglement; maritime traffic increases the probability of deadly collisions with babies and youngsters, not to mention the acoustic pollution as a secondary consequence affecting their critical habitats. Sometimes I wonder if that conservation status of “least concern” really applies to any marine megafauna nowadays.

We encourage you to keep engaging as a citizen scientist. We need you to volunteer and we need you to keep traveling responsibly, especially to beautiful places like Golfo Dulce, which happens to be a critical habitat for marine biodiversity. If we take these actions and keep nature at the forefront, we can keep humpback whales traveling and migrating safely in this changing planet.

Help Lenin and his team work to conserve the many species that swim the waters of Golfo Dulce by joining the Earthwatch expedition Marine Mammals and Predators in Costa Rica.