How to Save the Planet, One Tree at a Time

Even though the official United Nations “Year of the Forest” was eight years ago in 2011, the year 2019 has without doubt been The Year of the Tree, a transformational time that has highlighted the global importance of trees, with millions of citizens getting a bit muddy in the process. This year, Ethiopia made the Guinness Book of World Records with a citizen science community exercise of planting over 352 million trees during a 12-hour span. Less than one month later, the region Uttar Pradesh in India planted 220 million trees in one day, representing approximately one tree for every resident of that state. In both countries, citizens participated in these massive plantings, digging holes and watering seedlings.

In scientific circles, several recent publications have spotlighted tree-planting as an effective, relatively inexpensive solution to the climate change crisis, because trees can absorb much of the carbon dioxide that people pollute. The Swiss Federal Institute of Technology published a report that the planet could support an extra 2.2 billion acres of tree cover, using lands currently underutilized or areas where forests were cleared. They further claim that, over time, these newly planted trees can remove about two-thirds of the estimated 330 billion tons of carbon spewed into the atmosphere by humans since the Industrial Revolution.

Destroying a tropical rainforest and other species-rich ecosystems for profit is like burning all the paintings of the Louvre to cook dinner. 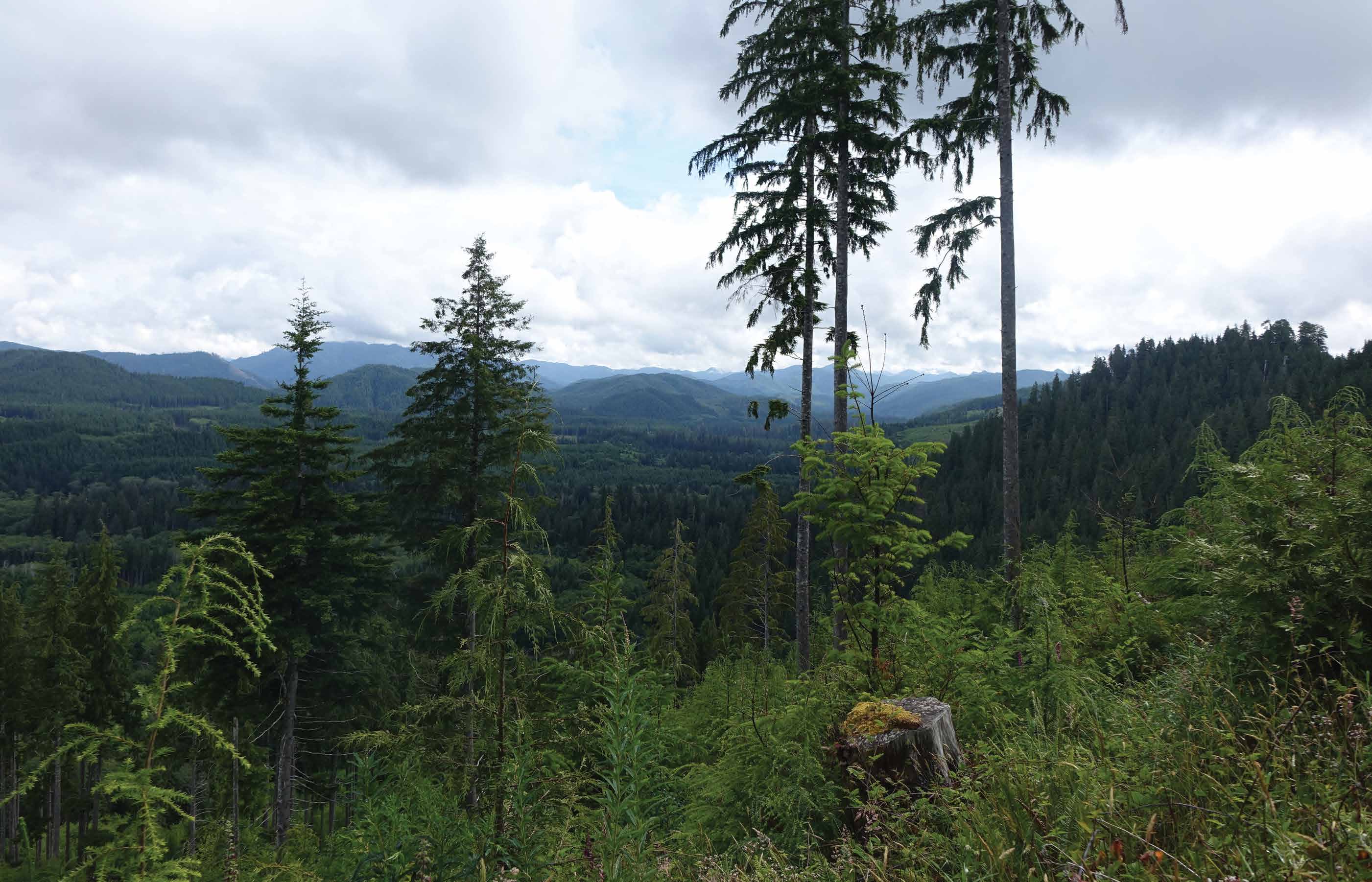 Another scientific team counted all the trees on our planet, using highly sophisticated satellite imagery. Their results indicated that Earth still houses some three trillion trees (that is 3,000,000,000,000!), with Russia holding approximately 642 billion trunks followed by Canada and Brazil, and the United States coming in fourth with 228 billion. Although some scientists dispute the exact numbers reported in these studies and tree-planting exercises, the overall gist is that tree canopy cover is emerging as super important to the health of our planet, and also represents a creative solution to current climate disruptions.

Although it sounds like we have a lot of forests, and are planting more (which we are), the reality is that over 15 billion trees are cut down each year. An estimated half of the world’s primary (meaning original or old-growth) forests have been completely destroyed during the past six decades since most of us baby boomers were born. Not surprisingly, such old-growth forests housed most of the global carbon, significantly more than young tree farms or young seedlings struggling to survive in the harsh soils of Ethiopia or India. Even more important, older forests house an estimated 50% of our planet’s terrestrial species in their canopies, serving as a veritable genetic library of biodiversity including pollinators, sources of medicine, decomposers, foods, building materials, and creatures with spiritual significance. The United States cleared over 95% of her original forests, so we are one of the culprits that denuded our landscape. Temperate forests are easier to restore than the tropics, and the American economy is wealthier than many tropical countries so it can fund tree planting to replace our extensive clearing in the past. Other countries are unfortunately following our history, by clearing their primary (or old-growth) forests. But not only is it more expensive to replant a tropical forest, but it may take over a thousand years to restore, as compared to 50 or 100 years to regenerate a New England forest. 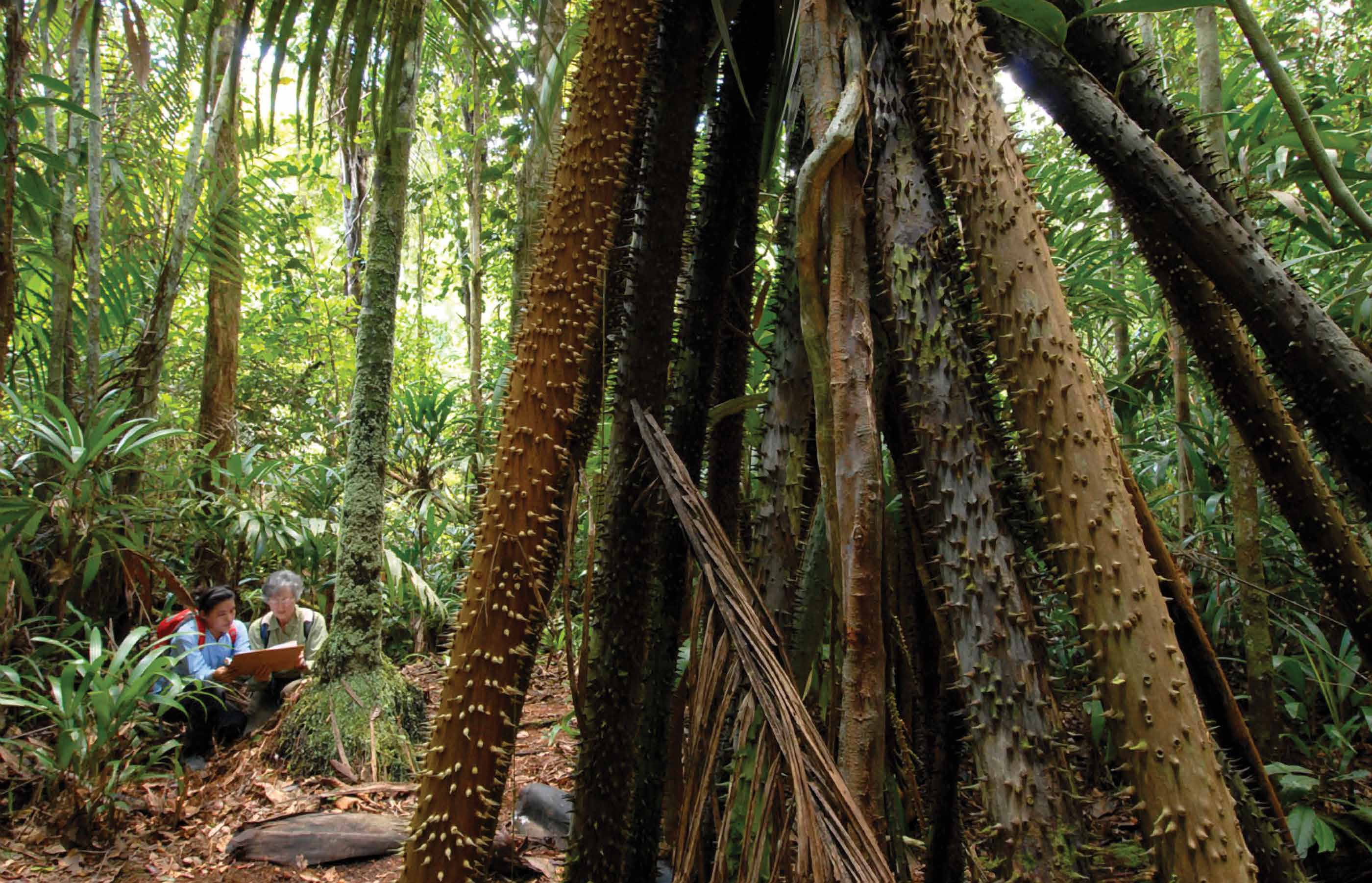 I was recently interviewed by the BBC with a compelling thought question: What will happen if all the world’s forests are cleared? My answer was simple but stark: Humans will become extinct almost immediately. Period!

In a world without forests, Earth will have massive soil erosion in all of our waterways, because tree roots conserve soil. Without trees, farmers and gardeners would have no birds feeding on insect pests and no pollinators that rely on forest canopies for some of their life cycles. Without trees, we would have water wars, because trees are a global machine whose canopies not only cleanse fresh water but also ensure effective water cycling into the atmosphere; it is well proven that deforested areas are both hotter and drier. Without trees, millions of species would have no home and our planet’s health would fail without all those important “cogs” such as predators, herbivores, producers, and consumers essential to the machinery of ecosystem health. Without trees, we would have a significant decrease in oxygen production and carbon storage, plus lose the building blocks for all food chains, because tree canopies directly transform sunlight into energy. Without trees, several billion people would lose their most important spiritual heritage.

Many humans do not realize that forests keep us alive because they never learned this in school. It is an accepted scientific fact that tropical forests including the Amazon, Congo Basin, and Southeast Asia are essential for all life on Earth. Tropical forests not only serve as Climate-Control-Central for our entire planet, but they also house the greatest amount of biodiversity, with an estimated 50% of species living in tropical forest canopies (and to note, some 90% of these treetop species remain unclassified by science). Although most of the public is aware of tropical deforestation and its terrible consequences, few are aware of the importance of temperate forests. Some of the largest remaining forest expanses exist in northern Russia, China, and Canada and deserve similar conservation priority.

How do both tropical and temperate forests keep humans and the planet alive and healthy? Without educating the public about trees, we can’t expect citizens to care about conserving, planting, and expanding our forest footprint on the planet. Here is a list of 10 things that forests do for us, most of which happen while we sleep.

What do forests provide for us? 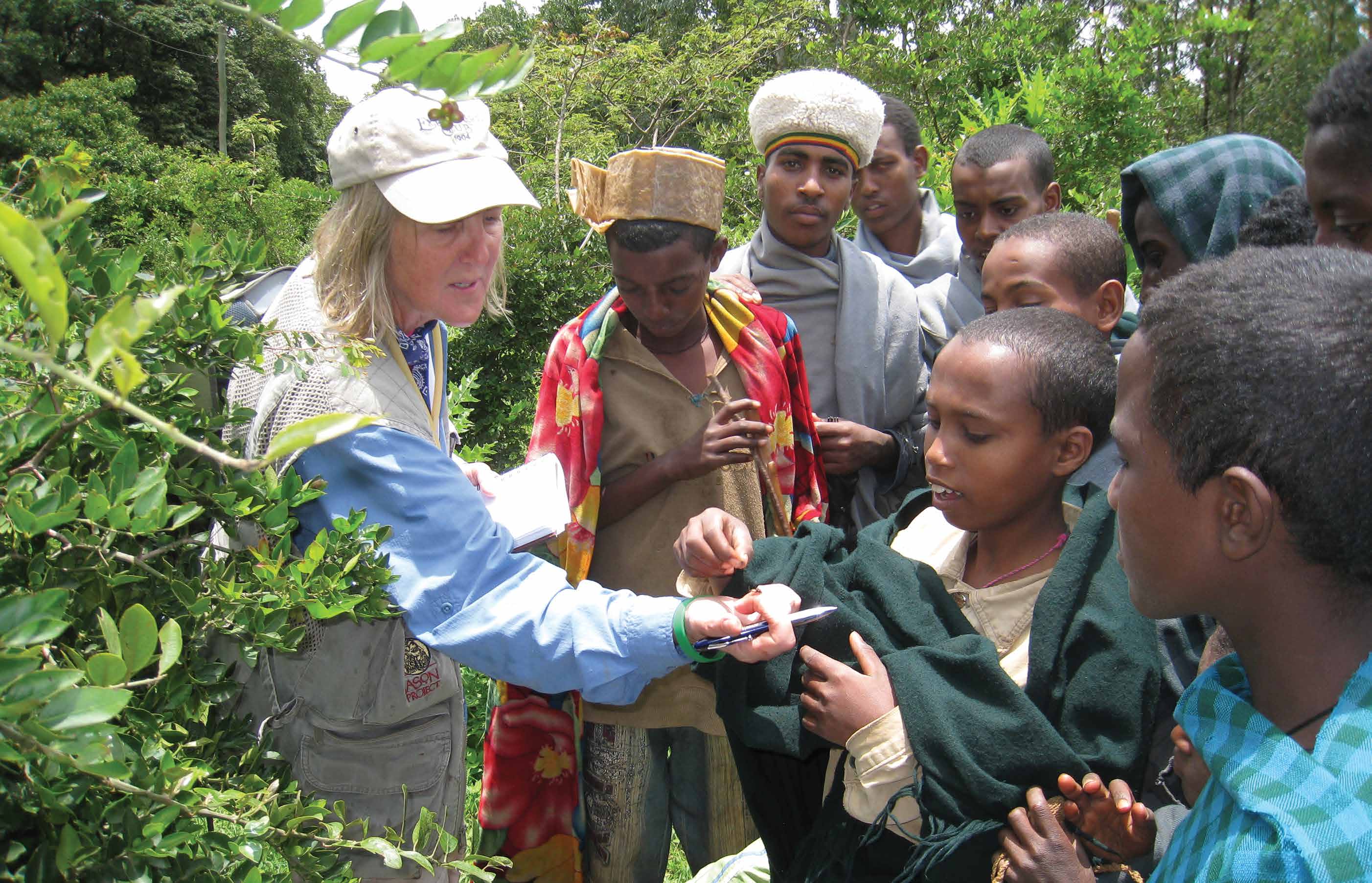 I recently spoke to a group of middle school girls engaged in a special treetops camp for economically challenged families in my childhood town in rural New York State. I asked the girls what trees provide for them, and they thoughtfully came up with nine of these 10 benefits, or natural services as scientists call them. But one thoughtful young lady added an 11th, an important new addition to my list: Happiness!

When she said this, the audience smiled and spontaneously clapped. As adults, we often overlook the joy that nature conveys, but who isn’t happy when walking through beautiful woods or seeing a wonderful tree shading a street, perhaps hugging one, or climbing a low-hanging branch as a child? In Japan and elsewhere, the newest craze is forest bathing, which represents immersion in stands of trees to appreciate the fresh air, smells, sounds, and tranquility. Trees and green foliage are not only essential to life on our planet, but also an elixir for emotional and spiritual well-being.

So, what do concerned citizens do about this global dilemma of deforestation? One solution is simple: Plant trees! Another is to insist on taking family outings that include trees. By supporting ecotourism, such as visiting canopy walkways instead of amusement parks, by staying in forest lodges instead of highway hotels, you provide economic incentives to local people to conserve their forests, not clear them. In my world of canopy science, I have discovered that building canopy walkways not only inspires innovative research on the millions of species living up there, but it also creates an economic incentive for indigenous people to make money from ecotourism instead of from logging. I encourage Americans to take their kids on a canopy walkway, not just a roller-coaster. It is critical that Americans, who are the world’s largest consumers, make this message clear. When the people along the Amazon recognize that visitors will pay to see scarlet macaws or great kapok trees, then the locals become vigilant stewards of saving their own forests and eliminating illegal poaching. And when families and citizens visit forest canopy walkways, they come away educated and inspired by the incredible complexity and magic of a forest. 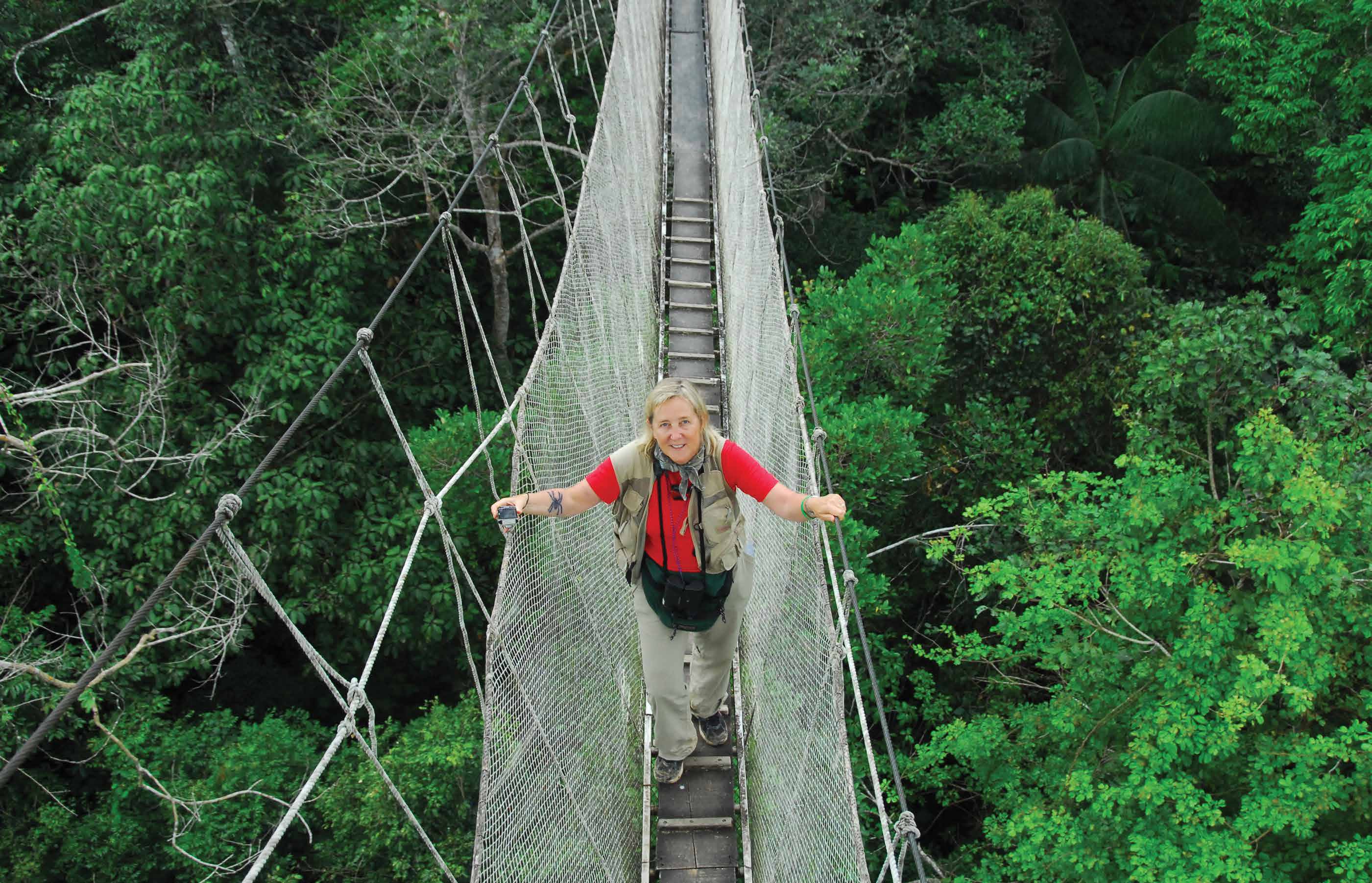 Right now, the Amazon is under siege, and the current government of Brazil has relaxed many of its conservation incentives in favor of short-term economic gain. An underlying reason for much of this clearing comes from American consumers, who buy Brazilian timber (often illegally imported), soy, tropical fruits, beef, and palm oil. This consumerism incentivizes countries like Brazil to encourage farming, logging, and roadbuilding to ramp up their economy.

Another simple but effective action to save forests: Join an Earthwatch tree research team and contribute to the sustainability of Earth’s forests. For nearly 50 years, Earthwatch has assembled talented teams of volunteers to assist scientists in their global quests to answer challenging questions about our planet. Forest research is one important component of the Earthwatch portfolio, and tree scientists need the help of citizens to find solutions to climate change through forest ecology. How about studying bird songs in Washington’s Olympic Peninsula to understand how wildlife responds to different forest management strategies? Or perhaps you would prefer to work in Brazil’s Atlantic Forest, planting trees and figuring out how reforestation practices affect the ecosystem services in these tropical regions? Maybe you would like to travel by boat in the Peruvian Amazon to document biodiversity in this precious forest ecosystem? Earthwatch provides unique expeditions around the world, not just for sightseeing, but to provide important information for a sustainable future. (Visit Earthwatch.org for all of our forest research opportunities and more!)

Regardless of all the important economic and ecological reasons to conserve forests, there are intrinsic and emotional reasons to conserve our trees. Personally, I never want to live in a world where a wood thrush no longer sings its exquisite symphony at the top of a hemlock tree in Vermont. Nor can I envision a planet where kids can’t climb trees and feel pure joy to discover a bird’s nest as part of their childhood. And no one should ever miss out on a sunset that filters through the trees on a hillside at dusk. Or the gratitude that shade provides while walking along a busy urban sidewalk. Trees are integral to our spirits as well as our survival. We need trees more than they need us.

Learn more about the research being conducted in the Peruvian Amazon in a blog post written by Earthwatch scientist Dr. Richard Bodmer: “Amazon Burning: How Earthwatch’s Research is Helping to Conserve the Amazon and Reduce Fires.”