In November 2015, Earthwatch Research Director Dr. Stan Rullman traveled to the Soutpansberg Mountains in South Africa to join the expedition Conserving Leopards and Monkeys in South Africa. These mountains supported one the highest densities of leopards on the continent. But this is changing, and Earthwatch researchers and volunteers are helping to determine why. 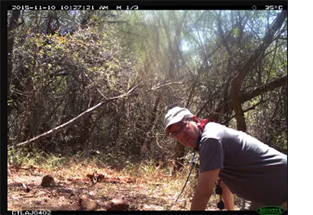 cameras equipped with motion or infrared sensors—to capture photos and video of elusive wildlife without disturbing them. In some cases, rare species are captured on camera, often to the delight of research teams. In November 2015, researchers Dr. Sam and Katy Williams came across an image of a rather interesting creature, documented for the first time in South Africa. The pictures reveal Dr. Stan Rullman (the author of this blog post) cautiously crawling along one of the swaths the research team uses to assess overall biodiversity and leopard abundance in the Soutpansberg Mountains.

These mountains have historically supported one the highest densities of leopards on the continent. But this is changing, and Sam, Katy, and their advisor, Dr. Russell Hill from Durham University, have asked for Earthwatch’s support to help determine why.

Conflict between humans and wildlife in the Soutpansberg Mountains 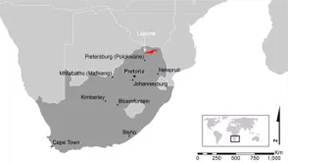 Leopards are frequently accused of preying on livestock, which can lead to retaliation against these animals. Earthwatch volunteers assist researchers in “ground-truthing” leopard diet by collecting, cleaning, and examining leopard scat to determine exactly what the leopards have been eating. The results of these analyses indicate that leopards are primarily preying upon wild game, which is a good thing (unless, of course, you are a bushbuck). 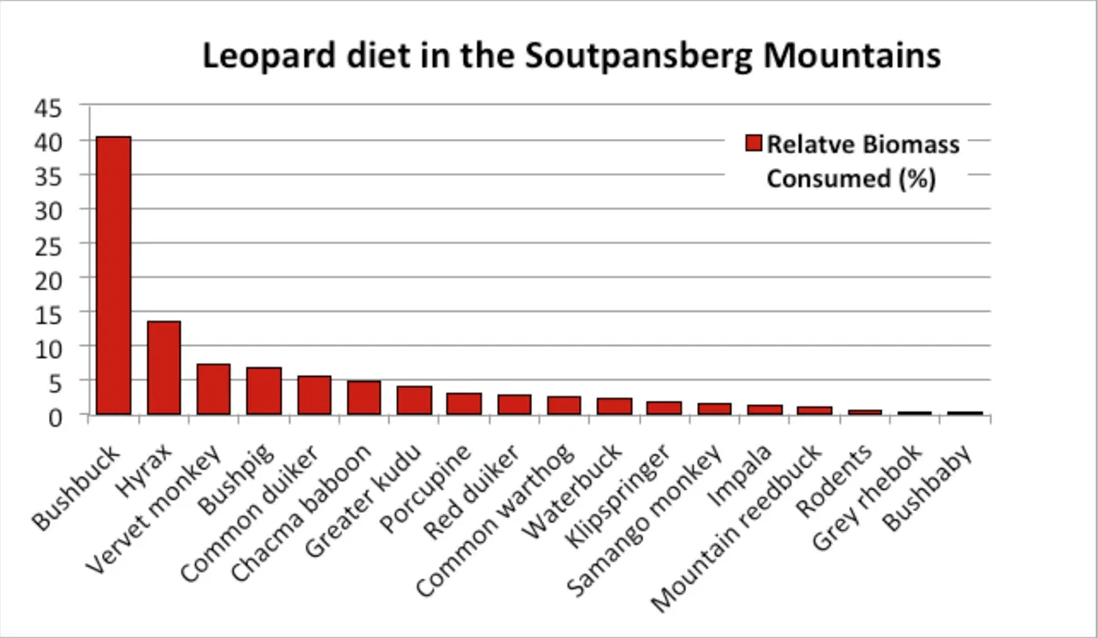 Leopard diets based on scat collected within the Soutpansberg Mountain, South Africa

But sometimes there is other evidence. A dead calf on a rancher’s land with marks that suggest leopard. An upset rancher calls to Dr. Hill’s team. That is a good thing too, because it shows that their outreach to the farming and ranching community may indeed be working. In the past, there would simply be a gunshot in the night. The team sets up a camera on the calf, to see if the perpetrator returns. And it does. A three-year-old male leopard known as BB.

We have further confirmation of our leopard population attacking livestock, although our dietary analysis continues to detect no livestock or expensive game. This confirms the need for extensive and ongoing data sets to examine these issues since short-term data sets can be misleading. It also highlights the importance of working with communities to improve their husbandry techniques and construct adequate bomas [protective corrals] for their livestock. 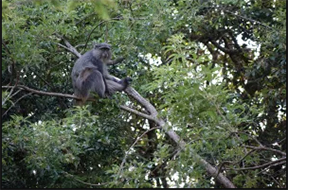 Leopards aren’t the only wild animals that impact local farmers. The researchers are also studying several species of monkeys and their propensity for crop-raiding, which occasionally impacts local crop productivity and increases the tension between local farmers and wildlife. While chacma baboons are the most frequently reported raiders, the team has also been habituating troops of samango monkeys and vervet monkeys so as to increase their ability to assess just what these smaller species are actually feeding upon. Earthwatch volunteers have been instrumental in this habituation process—particularly with the samangos. They join researchers in tracking the monkeys on foot through field and forest—an amazing opportunity to spend an intimate morning or afternoon with these primate relatives of ours.

A Hotspot for Biodiversity 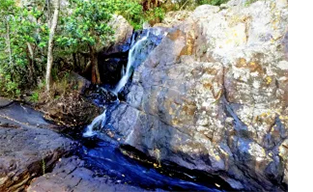 In addition to this human-wildlife conflict and mitigation focus, the research team is also assessing the importance of this rather insular mountain system as a hotspot for biodiversity in northern South Africa. Surrounded by large agricultural areas and game farms in the lowlands, this mountain range is high enough in elevation to grab much-needed moisture from the air, resulting in rich forest pockets, permanent streams and tumbling waterfalls—and a critical supply of water to the more intensively altered landscapes below.

A large array of camera traps is used to determine what species are using this landscape, and Earthwatch volunteers assist with camera deployment, maintenance, image recovery, species identification and numbers. While some of the cameras are located along the rocky dirt roads that traverse the mountain range, most are located away from the roads, resulting in glorious hiking opportunities through this beautiful and wildlife-filled landscape (always accompanied by research staff). What they are finding on those cameras has revealed that an amazing diversity of species are using this mountain refuge, including a rich assortment of medium-sized carnivores like African civets, large spotted genets, black-backed jackals, honey badgers, caracals, and both brown and spotted hyenas. Surprise cameo appearances have also been made by Africa wild dogs and cheetahs—just to keep volunteers on their toes as they scan through the photos. This is just a partial list of species they’ve captured on their cameras which offers a window into the amazing diversity of African species, from a variety of habitats, that utilize this mountain refugia. 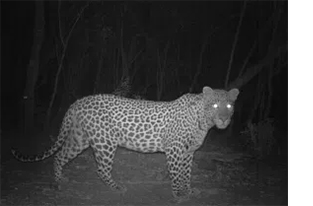 While leopards are rarely “spotted” (ahem) in the field, just about every camera trap photo logging session brings an excited gasp from that volunteer reviewing the images as a large spotted cat appears on the computer screen (like this one, from the same camera that “captured” me). That prompts the next level in identification: exactly which leopard is it? The team maintains a catalogue of known individual leopards—identifiable by the unique patterns of their spots, not unlike our fingerprints. It is this last component that is revealing the apparent decline of leopards in the region.

Fewer “known” individual leopards are showing up on the project’s camera traps, suggesting a high turnover of the cats in the mountain system. What would lead to that turnover? According to Dr. Hill:

The trends suggest that conflict [between people and leopards] has increased, which is having a significant impact on the leopard population. This information is critically important from a management perspective.

And based in part on data from Dr. Hill’s research, South African governmental wildlife managers have responded by imposing a total ban on leopard hunting for 2016, giving researchers a chance to assess what specifically might be driving this decline in leopard numbers. 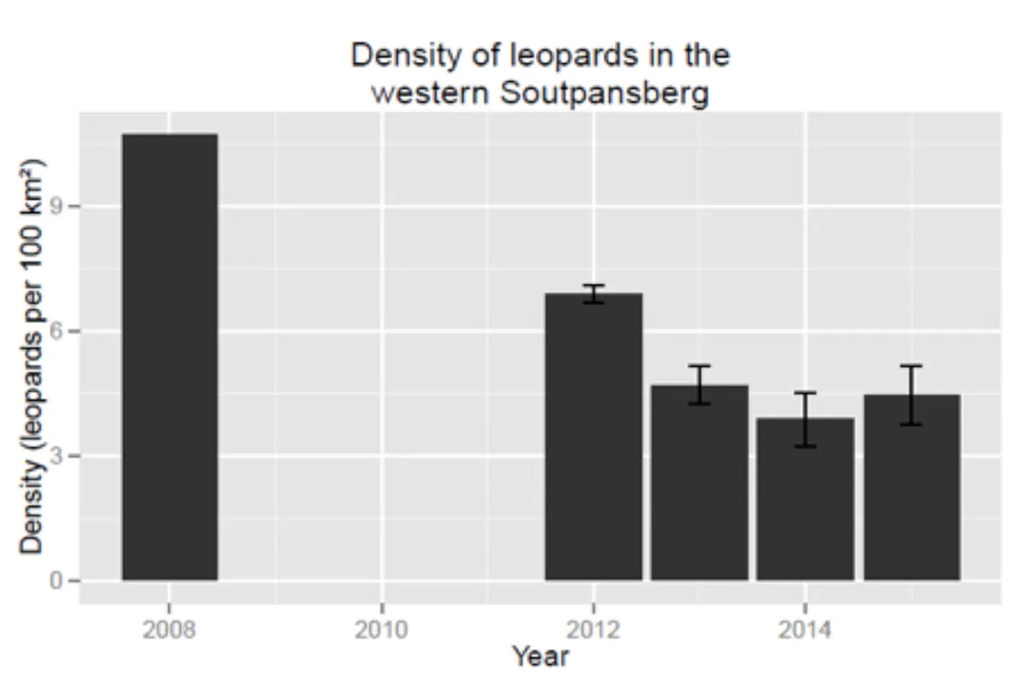 Graph showing the apparent declining number of identified (and identifiable) leopards in the research area between 2008 and 2015.

The cats are also getting caught in snares set for other game, which has led to removing snares found within officially protected areas—an increasingly important task that volunteers engage in. Local community members often rely on procuring smaller animals as a source of protein, though snares rarely discriminate between target species and “collateral damage”, and in many regions, such bushmeat hunting and trapping can reduce species abundance—even those not sought out as sources of food. 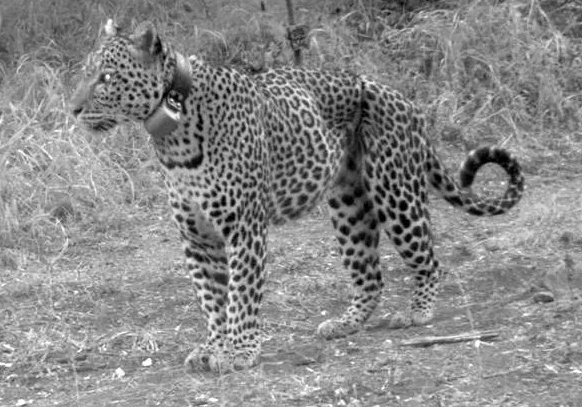 Collared leopard with snare around waist. Two weeks after this cat showed up on this camera trap, the radio signal was lost and the leopard had not been detected on camera traps since.

All that is learned in this critical research gets channeled in all the expected places—scientific publications (see links below), contributions to regional wildlife management plans, conference lectures (including this one) and posters, as well as several student theses and dissertations. But the research teams also share their findings with the local community, through several innovative ways. Field team leader and PhD student Katy Williams compiled the project’s best camera trap images and presented those as a travelling exhibition at local art galleries, shopping centers, coffee shops, and schools, introducing the local residents to the amazing diversity found in the landscapes they call home (a nice fusion of art, science and education). 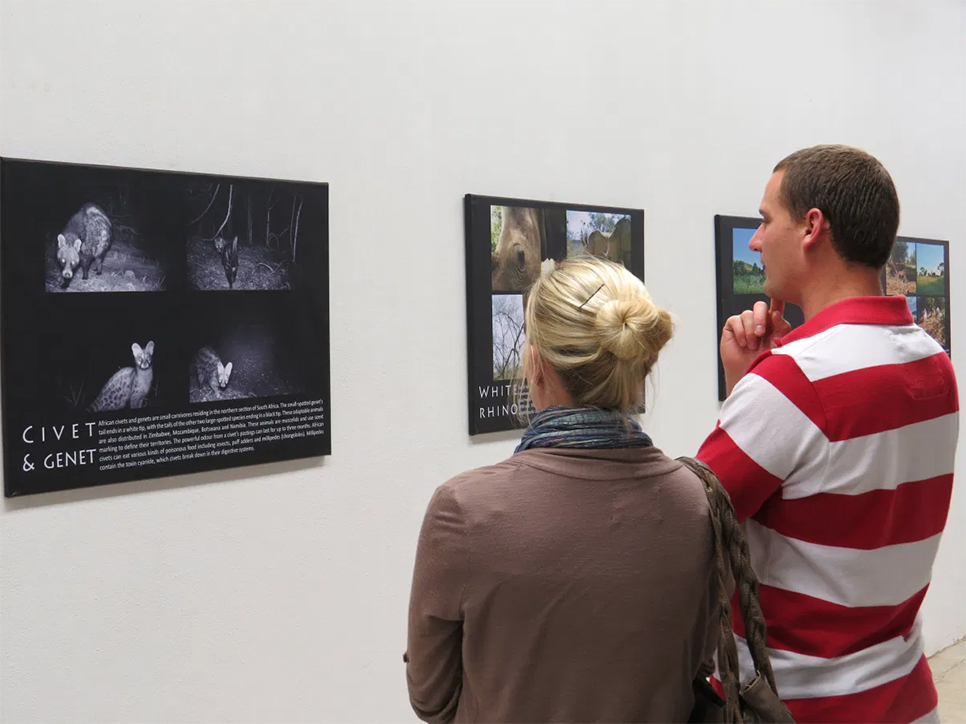 Katy also wrote and illustrated a children’s book (Hyaena Time) based on her doctoral research on brown hyenas. Earthwatch helped that unique publication get translated into the four primary languages of the region—Venda, se Sotho, Afrikaans, and English (ensuring a broad readership). 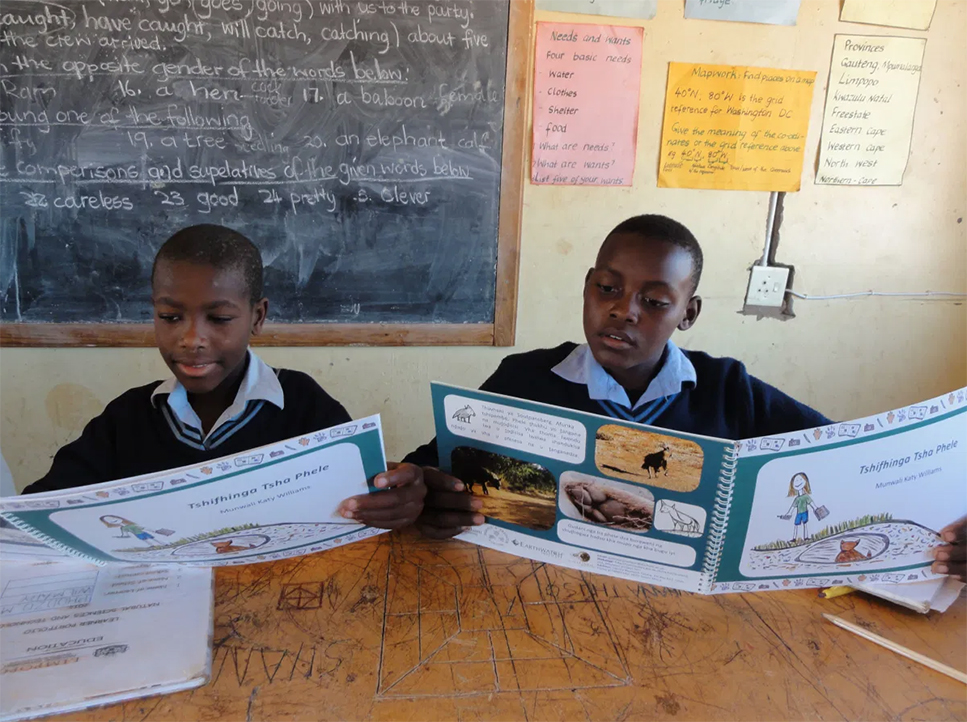 All of the research and outreach into the local communities highlights the commitment of Dr. Hill’s research team to work to actively assess and reduce the threats to the leopards, brown hyaenas and primates while simultaneously promoting tolerance for these creatures in the increasingly human-influenced systems they live in. Creative strategies for coexistence—based on sound scientific findings—can maintain (and even grow) the livelihoods of the farming communities, while doing the same for these wild denizens of South Africa. For volunteers, this results in a truly unique, meaningful and engaging African experience, in a magnificent hotspot of South African biological diversity.

To learn more on how you can join the research team, please visit the Earthwatch expedition page.