Another Day, Another Expedition

Warren Stortroen is a self-described “Earthwatch addict,” and we love him for it.  He’s been on 71 expeditions since the mid-1990s, and is still going strong. In addition to enjoying his travels, Warren blogs about them at Retirement Life Matters to share his experiences with others.

We wanted to share one of Warren’s latest re-caps of one of his many expeditions: Coastal Ecology of The Bahamas. This project was supported by Earthwatch for a dozen years, beginning in 2000, before being retired last season.

Earthwatch volunteers collect data from above and below the waterline

Here is why we supported this project: The Bahamian archipelago is a unique ecosystem, constituting 700 islands and two thousand cays in the northeast Caribbean Sea. Tourism is a major industry in the Bahamas, depicted as an exotic paradise because of the sandy beaches, turquoise seas and tropical weather. However, due to the small size of the islands and their ecology, there are limitations to the level of development that can occur without irreversible environmental changes occurring.

Thanks to Warren’s blog, you can still read about his experience today, as reported on Retirement Life Matters:

We grabbed our snorkeling equipment and the ice chests with lunch fixings and followed the research scientists down the trail to a sandy cove on the Atlantic side of Long Island. As we rounded a corner we were greeted by a circle of beautiful dark blue water at one end of the cove! It was Dean’s Blue Hole that was featured, along with other Bahamian blue holes, in an August, 2010 National Geographic article! The Earthwatch Institute research expedition was COASTAL ECOLOGY OF THE BAHAMAS, a study of coastal land use and management on all of the major islands in the Bahamas. Long Island is a sparsely populated narrow strip of land in the southern part of the archipelago. Commercial activity is very limited but includes fishing, sponge diving, agriculture and a small amount of tourism. There is bound to be future development, however, so this study is an attempt to guide that development in ways that are healthy for the coastline while still providing income for local residents!

The volunteers met the research scientist, Dr. Kathleen Sullivan Sealey, and her staff at the Nassau airport for a short flight to Deadman’s Cay. We were then housed for our 10 day stay in a nearby rental apartment complex in shared bedrooms, and where the staff prepared the meals with assistance from the volunteers. We did many studies at several different coastal sites on both sides of the island, snorkeling in the coves and running vegetation census transects on land. Part of the staff and volunteer crew would start the day taking turbidity samples and water temperature readings at various sites along the coast while the rest prepared breakfast. Then we’d drive to the day’s scheduled work site. Lab work on the samples was conducted during breaks in the scheduled work.

The western side of the island is quite shallow with some mangrove coves and includes an abandoned salt works that was destroyed by a hurricane. There were several conch middens where the shells were left by the fishermen after removing the meat, and strings of sponges left to dry by the sponge divers that still have a small market for them. The water was quite turbid and the bottom polluted in many places! The ocean side, however, was lined with rugged and beautiful coves and was great for snorkeling! The most beautiful was Dean’s Blue Hole! It’s a deep sinkhole with steep cliffs behind and a shallow white sand cove in front that contrasts beautifully with the deep blue color of the water! It was great fun snorkeling around the edges taking algae samples and counting the many species of colorful fish!

Since I am not a great snorkeler I spent most days on the vegetation census team, where we ran 50 meter transects from the beach inland to identify and count the different plants on both sides of the tape. We also did some bird walks and recorded the number and species sighted in the coastal environment. While our team was doing one of the plant surveys, two of the researchers took spear guns and went hunting the alien Lionfish under a nearby pier and managed to bring in several! In order to protect the native fish the Bahamian government promotes eating Lionfish instead of the endangered native groupers!

This expedition was great for learning about the many aspects of coastal ecology! A healthy coastal environment is extremely important to maintaining the productivity of our oceans, so Earthwatch offers several volunteer scientific research expeditions in coastal areas of the Bahamas, Belize, the Seychelles, Kenya, our Gulf of Mexico and other areas of the world! Most require some ability to snorkel, but you don’t need to be an expert, so seniors with an interest in helping the environment on beautiful tropical beaches should consider volunteering!

Warren’s next adventure will be on the When Archosaurs Attacked and Reptiles Ruled Texas expedition—and knowing what a fan he is of discovering the past, we know he’s going to love that one, too. 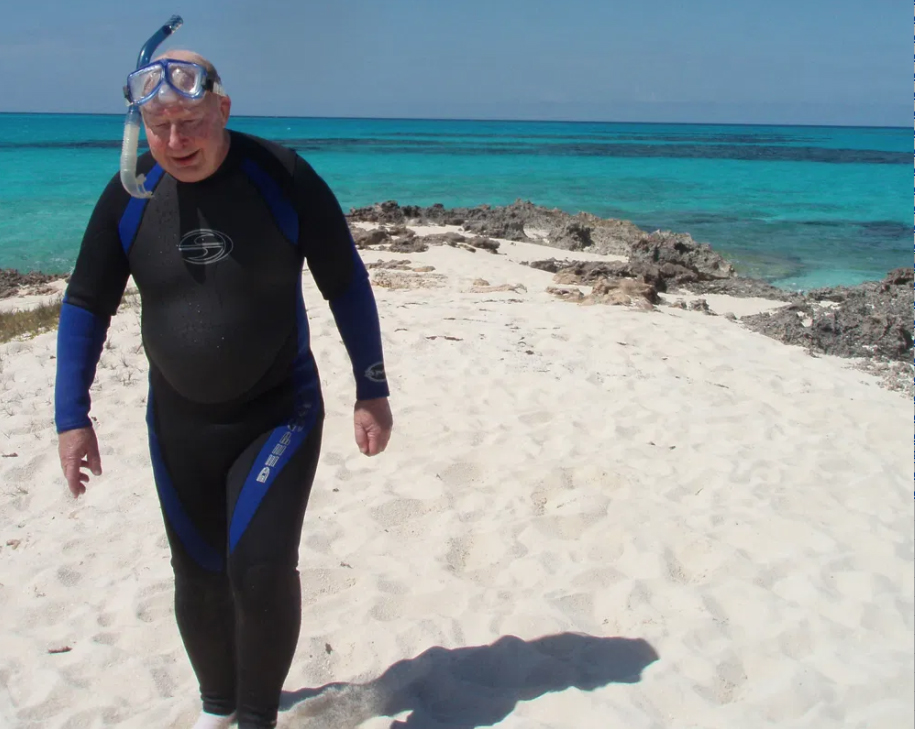 GET THE EARTHWATCH NEWSLETTER