The Wolves of the Sea

Off the coast of Vestmannaeyjar, an archipelago in the south of Iceland, a massive, black fin pierces through the waves...then a second, and a third. Fountains of seawater spray into the air. Beneath the surface, the “blackfish” call out to each other, their voices rhythmic as they sing and click a language unique to their pod. A family of killers, the wolves of the sea.

Killer whales have captivated us for generations, inspiring both fear and fascination. Yet despite our best efforts to control them, they have proved, time and again, that innate wildness cannot be tamed.

In March of 2016, SeaWorld pledged to permanently discontinue its trained killer whale performances, following the high-profile and gruesome death of a SeaWorld trainer in addition to mounting pressure from animal rights advocates. Then, just last month, California approved a law that outlaws killer whale breeding and captivity programs.

Imagine a world where you can experience killer whales (which are not whales, in fact, but the world’s largest dolphins) in their natural habitat, while helping researchers to better understand them and the threats they face. In Vestmannaeyjar, Earthwatch scientists, including Dr. Filipa Samarra, are leading the expedition: Killer Whales and Their Prey in Iceland.

Nothing can prepare you for the moment you first experience a pod of killer whales in the wild. But for Earthwatch volunteers, it’s about more than bearing witness to these majestic creatures. It’s about understanding and conserving a species that has captivated our hearts and minds for generations.

In this story, you’ll discover the unique and at times distressing history of our relationship with killer whales. And you’ll find out why our mission to study this species in Iceland is so vital. 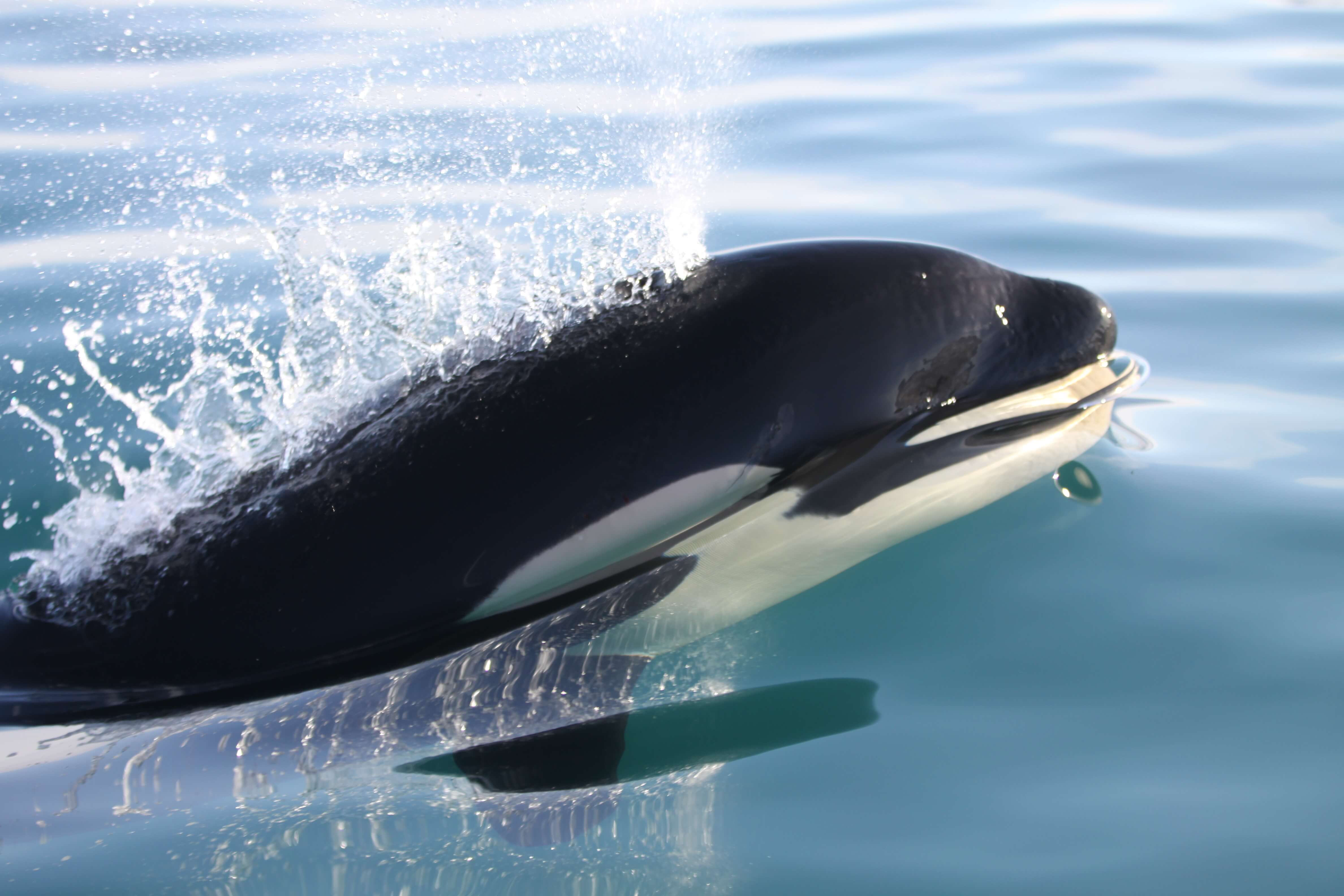 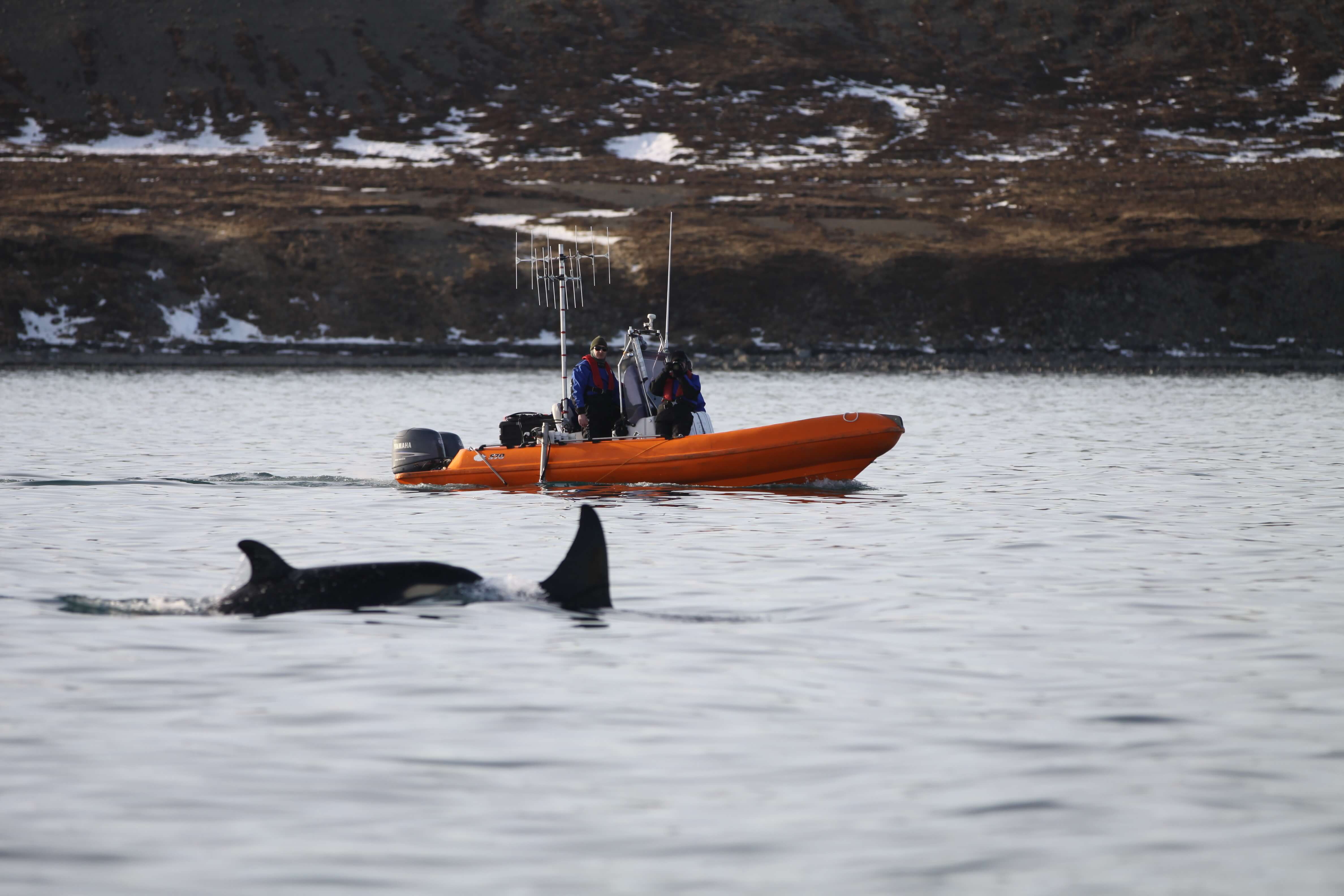 Midway through the 20th century, the population of herring in the Northeast Atlantic (off the coast of Iceland and Norway) declined dramatically, mainly due to overfishing in those waters. In Iceland, this decline led to the near-collapse of the fishing industry. At the time, there was rising conflict between fishermen and killer whale populations that were feeding on herring and reportedly harming fishermen’s nets. The fishermen believed the species posed an extreme threat to their industry, which was Iceland’s primary source of economic growth and prosperity.

In early 1954, the Icelandic government appealed to the United States to help them address the crisis. A few months later, Time Magazine reported that the U.S. Navy had attacked a pod of “savage sea cannibals” off the coast of Iceland. More than 100 killer whales died in the attack.

...One posse of Americans climbed into four small boats and in one morning wiped out a pack of 100 killers...

A young poet from Kansas who read the Time article, Michael McClure, was moved to respond. A year later, at a poetry reading in San Francisco (later considered to be the birth of the Beat Movement), McClure recited For the Death of 100 Whales before an audience that included Neal Cassady, Jack Kerouac, and Allen Ginsberg. In the closing passage, he read:

There are no churches in the waves,
No holiness,
No passages or crossings
From the beasts’ wet shore.

Despite the public outcry, in December of 1956, a Navy-issued newsletter reported on the continuation of these efforts. According to the article, ridding Icelandic waters of the “deadliest of ocean creatures” enabled Iceland’s government to fulfill its foreign trade commitments. 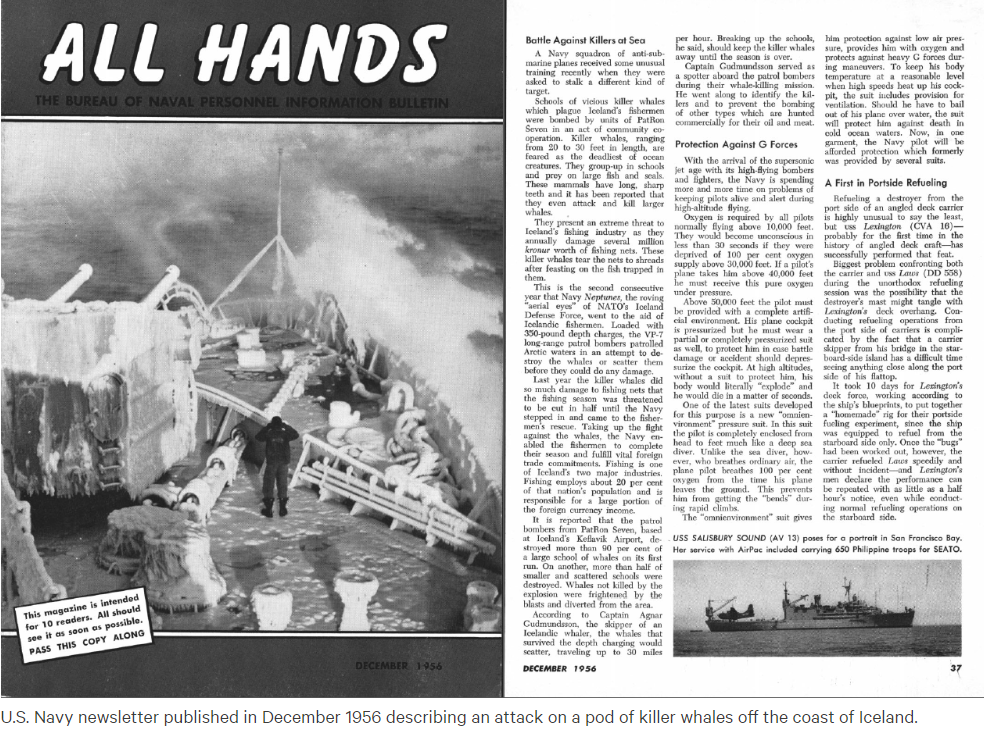 Today, the herring stock is managed carefully by the Icelandic government, and there is little competition between populations of killer whales feeding on herring and commercial fishermen whose livelihoods depend on it.

In November of 1961, scientists from Marineland of the Pacific—a marine park near Los Angeles, California—discovered a single orca feeding nearby in Newport Harbor. For hours, the team from the marine park struggled to capture the killer whale, finally trapping her in a tangle of nets. She was transferred to a tank in the park—the first killer whale to be placed in captivity. She died two days later.

But the success of the capture effort launched a movement to collect and train killer whales for human entertainment. For nearly a decade, hundreds of killer whales were captured off the coast of Washington state and British Columbia. The vast majority were shipped to SeaWorld.

In 1976, Ralph Munro, an assistant to Washington State Governor Dan Evans, was sailing in Puget Sound when he witnessed SeaWorld collectors in the midst of a killer whale capture effort, just 100 yards from his boat. He watched as the captors used aircraft and explosives to herd the orcas and drive them into nets, which he knew to be a direct violation of the terms of their collection permit. Munro shared what he had witnessed with the governor, and the state sued SeaWorld. As per the terms of the settlement, the killer whales were released and SeaWorld was ordered to give up its permit to capture orcas in Washington state waters. SeaWorld’s primary capture site was officially off limits. So the marine park’s captors turned to Iceland.

Freeing Willy—the Tragedy and Triumph of a Hollywood Star

In 1993, the story of a captive killer whale that was released to the wild, thanks to the courageous efforts of a 12-year-old boy, captivated film audiences around the world. In the final scene of Free Willy, ‘Willy’ (whose real name is Keiko – a Japanese word meaning ‘lucky one’) jumps over a seawall to freedom, to the tune of Michael Jackson’s “Will You Be There.”

But the real story of this animal is far more complex, and lacks the Hollywood ending we had envisioned. Captured off the coast of Iceland in 1979, Keiko spent years confined in shallow tanks - no more than 12 feet deep - in marine parks. After the film was released, he returned to what is now Six Flags, Mexico City, where his health began to deteriorate. But following years of public pressure to return him to the wild, in 1998 he was transported back to Iceland. Despite extensive training on how to survive in the wild, Keiko never joined with a pod, although he did learn how to hunt for himself. He died roughly a year after his official release into the wild, off the coast of Norway. For more than 20 years, humans had controlled this animal, orchestrating every moment of his existence. But they couldn’t, in the end, teach him how to be wild.

The attention around Keiko’s release in Vestmannaeyjar, Iceland helped to shine a spotlight on the region and its unique killer whale population. At the time, there was extremely limited data on the behavior of these orcas, and no understanding of the size of the population. To protect these animals, to understand their threats, it was clear that more research was needed.

It was the start of a summer field season in Vestmannaeyjar for Dr. Filipa Samarra and her team at the Icelandic Orca Project - a research project she began in 2007 as part of her doctoral studies at the University of St. Andrews.

Each day, the researchers climbed to the highest point on Heimaey, the main island on the archipelago, to search for killer whales. Then, if the weather was decent and the sea was calm enough, they continued their search aboard a small zodiac. As soon as they spotted an individual orca, they photographed it and recorded its behavior - information that would later be added to an extensive database of sightings. Their efforts were part of a larger research study aiming to better understand and conserve the Icelandic killer whale population.

Filipa and her team could recognize individual whales by the markings on their fins and their coloration patterns. They had even come up with nicknames for some of the animals, such as Humpy or White Patch. But one day, Filipa came across a killer whale that did not look familiar, despite its very distinct markings. That evening, she searched through her records of all of the known killer whales in Iceland. She was thrilled when she found a match - same markings, same coloration patterns. But when she looked at the date, she was shocked. In many locations, when an individual killer whale disappears for one or two years, scientists assume it has died. The killer whale they spotted earlier that day hadn’t been seen for 20 years, and was clearly very much alive.

It made me realize how little we know about this population and how crucial long-term monitoring is to understanding it.

To Understand a Predator, Study Its Prey

On a global scale, estimates of killer whale numbers indicate that the species is faring well. But many scientists argue that different populations of killer whales should be treated as unique species, given their highly specialized feeding habits, communication systems, and social groups. In Iceland, little is known about the status of the killer whale population, in part because there has never been a long-term research study to monitor it.

Killer Whales and their Prey is the first long-term study to look at the diet of killer whales as an indication of their overall health and survival. The type of prey killer whales choose to feed on can reveal important aspects of their lives, such as the way they form social groups or how they communicate.

Scientists are particularly interested in understanding if the population of killer whales in Iceland is dependent on a specific type of prey, such as herring. Vestmannaeyjar is a spawning ground for herring stock, which lures killer whales to the islands in the summer months. Knowing whether killer whales are solely dependent on this food resource will help scientists to understand potential threats to this species so as to better protect them.

This is why we are out there, to be able to understand these fascinating animals better and improve our understanding of their lives, their behavior, and the threats they may face. 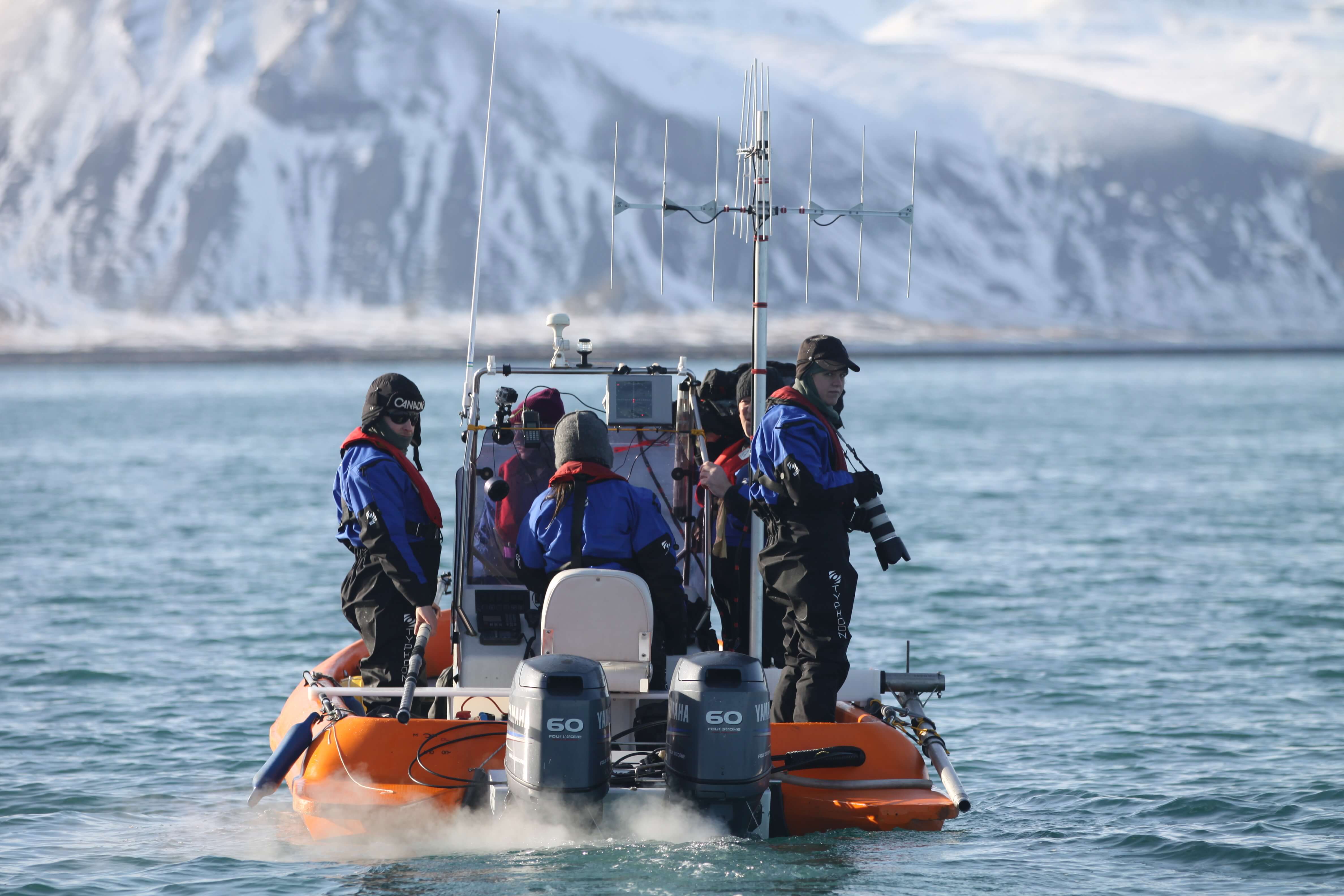 Guillemots, gannets, kittiwakes, Icelandic gulls, and puffins swarm the skies over Vestmannaeyjar, as pilot, minke, and humpback whales swim through the nearby waters. Amidst the volcanic lava fields that comprise the island, you peer through your binoculars, combing the coastal waters until you see the familiar black fins rise to the surface.

The history of our relationship with killer whales may be marred with controversy, even crime, but the present, and the future, is ours to define.

If you have any comments or questions related to this story, please contact us at communications@earthwatch.org. We welcome your feedback!