The Vigilant Fight to Save South Africa’s Rhinos

Widespread poaching is decimating rhino populations. The situation is dire: if poaching continues at its current rate, rhinos may become extinct within the next 20 years. In the heart of South Africa, which is home to three-quarters of the world’s rhino population, Earthwatch teams are engaged in one of the first studies to look at the services rhinos provide to their larger ecosystem, as well as the effects of dehorning on rhino behavior. Five individuals with close ties to this project share their unique perspectives: Lynne MacTavish, co-Principal Investigator for the Earthwatch expedition  Conserving Endangered Rhinos in South Africa; Dr. Stan Rullman, Earthwatch Research Director; Cassandra Nichols, Earthwatch Australia CEO; Kristen Lalumiere, field crew lead on the Earthwatch expedition Saving Joshua Tree’s Desert Species; and Phoebe Hart, first-time volunteer on the rhino expedition. 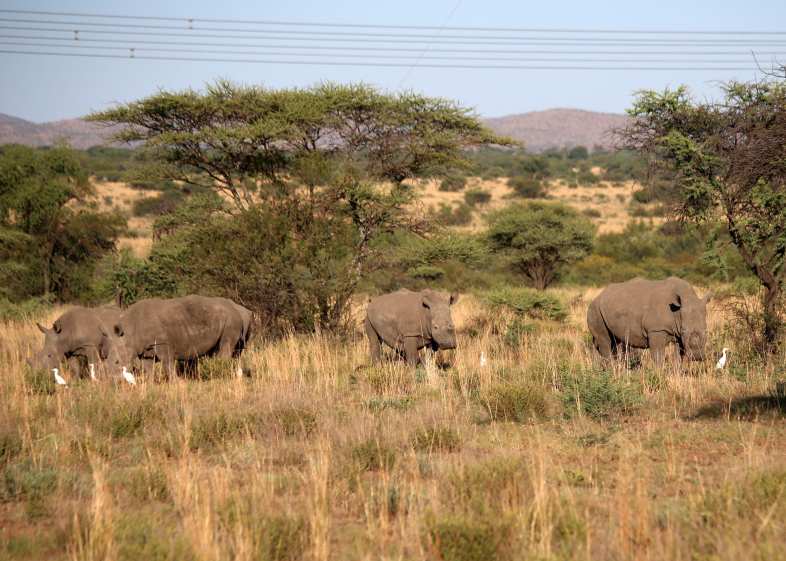 A Partner in the Fight

Earthwatch heard of our plight with rhino poaching and our desperate attempt to try and save our surviving herd of rhino. They leapt into action and launched the Conserving Endangered Rhinos in South Africa project. Over the past five months, four teams have visited the wildlife reserve and assisted us in collecting urgently needed data to access the impacts of dehorning rhinos, and to evaluate the importance of rhino to a savannah ecosystem. In a short space of time, huge amounts of data have been collected which is invaluable to the scientists as they race against time to provide scientific evidence to support management decisions in a bid to try and save the rhino from extinction.

From a reserve management point of view, the teams have given us so much moral support. Before the project began, we felt that we were fighting this war on our own. We now feel that we have supporters from all over the world, which has given us renewed energy and hope to carry on fighting. Some of the highlights for me personally as a Principal Investigator have been watching the volunteers fall in love with the rhino and see them recognize the different characters in each and every animal. I have received messages asking “Has Willis joined up with his family?” and “Has Brutus been accepted by the rest of the herd?” It has been inspiring to see how passionate the volunteers become about trying to create awareness around the world and assist us in any way they can once they get home.

One of the biggest highlights was finding Jimbo with the February team. He was only a few days old and his mother Jodi had brought him out to show us. The sun was setting and a Cape Turtle Dove was calling and there was not a sound from the volunteers. This was because we were all sitting in awe, staring at this tiny little rhino and recognizing the importance of this new life. To all of us, it signified a new beginning and a reason to keep on fighting.

vigilance/vig·i·lance/vijələns/ noun. “The action or state of keeping careful watch for possible danger or difficulties”

At the core of Dawn Scott’s rhino project in South Africa, researchers are assessing whether dehorned rhinos exhibit a higher level of vigilance than horned rhinos, particularly solitary or small groups when compared to larger groups.

To assess vigilance in rhinos, you look at their ears.

The ears of a vigilant rhino are constantly moving, back and forth, always scanning for that snap of twig, that rustle in the grass, a metallic click… even the alarm call of other animals, that might give away the presence of a threat. Overly vigilant animals are often so at the expense of other important behaviors, like eating. They also exhibit elevated levels of corticosteroids—stress hormones—that are critical in fueling a fight or flight response, and debilitating when such elevated levels become the standard that defines a creature’s “base state.”

To assess vigilance in those in charge of the protection of rhinos, though, you must look at their eyes.

The eyes of the staff at the private game reserve where the majority of the research takes place, and where the rhinos are all dehorned, all bear the marks of sleeplessness, of fatigue, and above all else, of a deep concern for the safety of those in their charge. Nightly anti-poaching patrols, daytime check-ins of mothers and their calves, day after day, and week after week, take their toll. Dark circles, bloodshot whites and an overall weariness still don’t mask out their commitment to maintain that vigilance against those that want those horns, for those eyes have all seen what happens when that vigilance wanes. Those eyes have all seen the coarsely hacked face of animals they have known since birth. They have seen, as the sun parches and the skin cracks open, the still form of that next generation that will not have a chance to see the sun, or to see a moonrise over the South African veld. 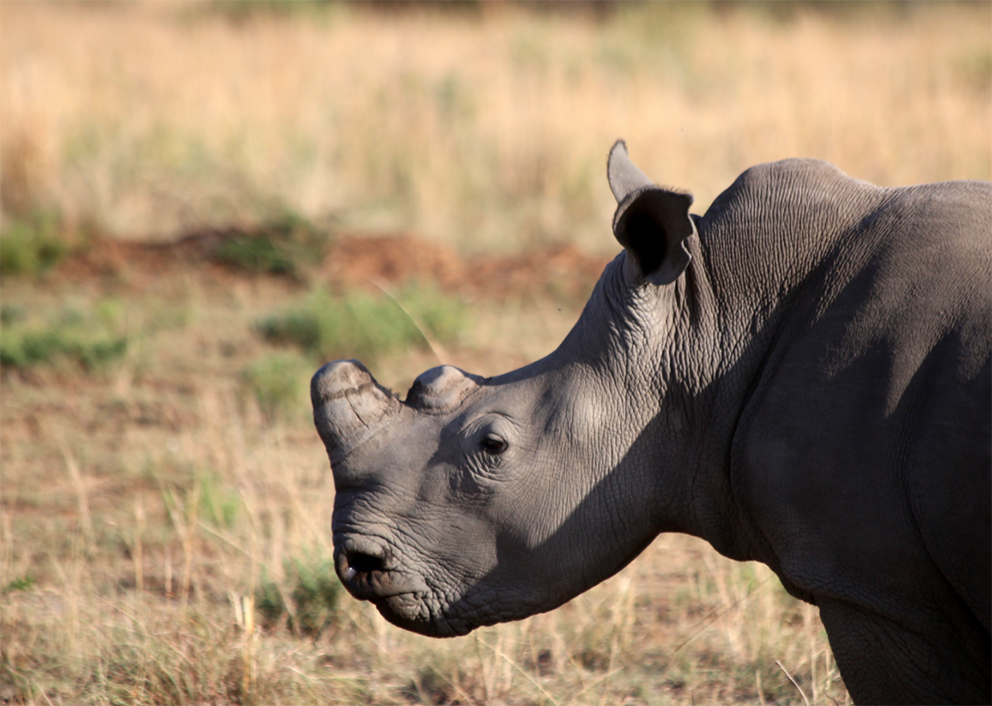 Fighting to Save a Species 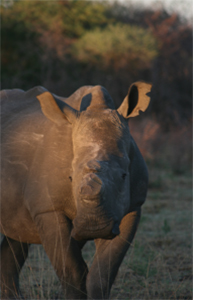 I have traveled to many places across the globe and been enchanted by the beauty of our world. From the salt plains of Bolivia to volcanoes in Hawaii, to glaciers in New Zealand and cloud forest in Costa Rica, to tropical beaches in Australia and deserts of Dubai. But Africa will always stand out for me. There is something about the place that seeps into your soul. A longing that you never know you had is awakened. Perhaps it’s because of our ancestry, or perhaps we grew up watching too much David Attenborough and it feels like a second home. Either way, when I had the chance to return to this wild and captivating land, I jumped at it.

Earthwatch’s Conserving Endangered Rhinos in South Africa took me back to Africa not only as a tourist, but as someone who was taking action for the wildlife that I so love. I have been undertaking conservation and scientific research for over 10 years now, and this expedition provided an opportunity to study and learn about one of Earth’s largest herbivores. I was expecting it to be a humbling learning experience, but I did not expect it to evoke so much emotion, to be moved to the degree in which co-lead scientist Lynne MacTavish and her father and reserve manager Dougal MacTavish achieved.

Rhino’s are disappearing. Every four hours, one rhino is killed by illegal poaching.

At this rate, wild rhinos will be extinct by 2026. My children won’t have the opportunity to see this magnificent creature anywhere but a zoo. We are losing the fight, but thanks to people like Lynne and her team, perhaps there is a chance. Their strength to continue fighting for this species in the face of adversity, to put their lives on the line (literally) and to never give up, even when surrounded by corruption and deceit, is one of the most inspiring tales I have ever encountered.

The project opened my eyes to the real rhino horn poaching crisis and challenged my views on private game reserves and the wildlife trade itself. In Africa, political difficulties prevent the creation of new national parks, so future protection of habitat and species is up to individuals. The role of private game reserves in African conservation is significantly underestimated. It was private game reserves that brought the white rhino numbers back from a staggering >50 individuals in 1971. Now, it is these owners who are fighting the battle again to save the species. 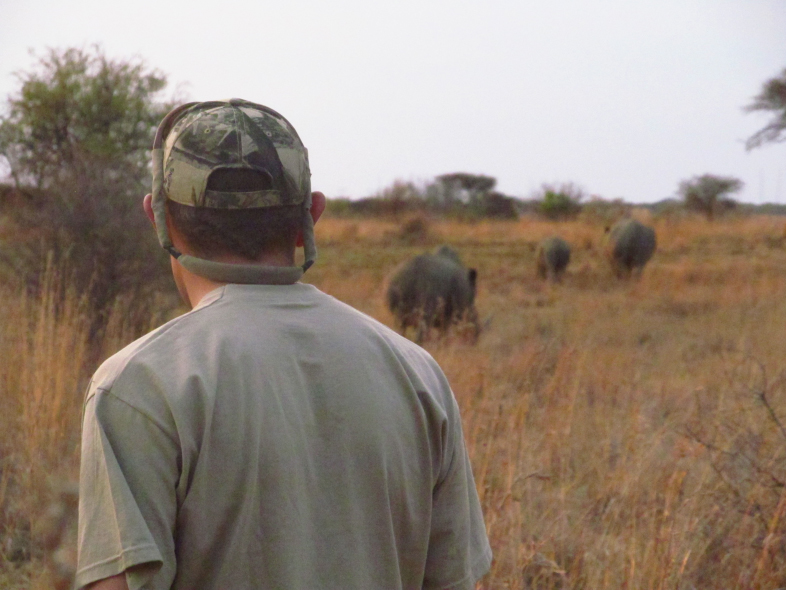 From Joshua Tree to South Africa

As a field crew lead on the Earthwatch project Saving Joshua Tree’s Desert Species, I was interested to see how another project’s lead scientist and field crew relayed science and their project objectives to the participants, as well as how they ran their daily schedules and activities. From this, my aim was to see how we might be able to make our own project in Joshua Tree National Park better. So, on January 1st, I found myself on a plane en route to the project Conserving Endangered Rhinos in South Africa. 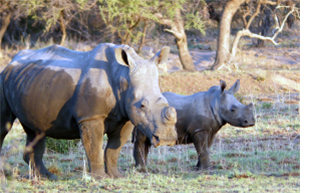 As luck would have it, my expedition group ended up being the 50th group held on the private wildlife reserve of this project’s study site. Given the level and years of experience the reserve team and field crew had with groups, I learned a lot from them that I have been able to apply to our own project here in the Southern California desert. Little details made a huge difference to our overall experience. They worked diligently to ensure we were cared for and knew what would help make our daily lives easier (especially when temperatures topped out at 125°F for a day or two). They made sure we understood what to expect throughout our time in the reserve and they conveyed clearly how our time and efforts were contributing to rhino conservation.

Even with how vastly different the two projects are, they both allow for the opportunity for people to step up and take action to help make this world a better place.

I saw firsthand how being a participant is a far different experience than being part of a project’s field crew. Being able to participate in a study that directly contributes to rhino conservation was a dream come true for me and changed my life. I felt a part of something bigger—more global—and that my efforts were having a direct positive impact on our Earth. I now have a better understanding of and appreciation for what our own participants experience when they come to the desert and assist us in collecting data on climate change.

A Day in the Life of a Volunteer

The chance to study such magnificent creatures as rhinos with Earthwatch was an opportunity of a lifetime; and the heroic research team conducting the ground-breaking and innovative research are some of the most passionate and inspirational people I have ever encountered. Each day was a treasure. Waking up in the grey light of dawn, the sound of great horned antelope drinking from a nearby dam intermingles with songbirds singing to their mates. The day is spent tracking and studying, quietly observing rhinos in the diverse environment in which they are vitally intertwined. The adventure and awe of the South African wilderness is breathtaking.

I gained an extensive knowledge of the deep emotional sensitivity and intelligence of these mighty animals and their integral role in the ecosystem.

The rhino’s sentient strength is moving and powerful; traits mirrored by the field scientists and rangers that are fighting day and night to protect them. From the moment I arrived, the Earthwatch team and field researchers welcomed me and other volunteers into their world, eagerly teaching and demonstrating their distinctive skills and expertise with passion and enthusiasm. I learned the foundations of managing a highly complex and biodiverse wildlife reserve, as well as tracking the details of ecological health through organisms as small as a dung beetle and as large as a giraffe. The conservation team led by example, representing courage, kindness, selflessness, and resilience. They quickly instilled a keen sense of environmental stewardship in all of us.

This expedition granted me the ability to partake in one of the most important environmental crises of our time. It was an inspirational and transformative experience to participate in this Earthwatch program to help save the critically endangered rhino, and to work alongside the heroes and heroines on the frontlines of the fight. I will forever be grateful for the lifelong friendships I developed, the ecological knowledge I gained, and the rekindled passion for wildlife conservation that is embodied by my newfound love and admiration of one of the world’s most distinctive ecosystem engineers—the rhino. 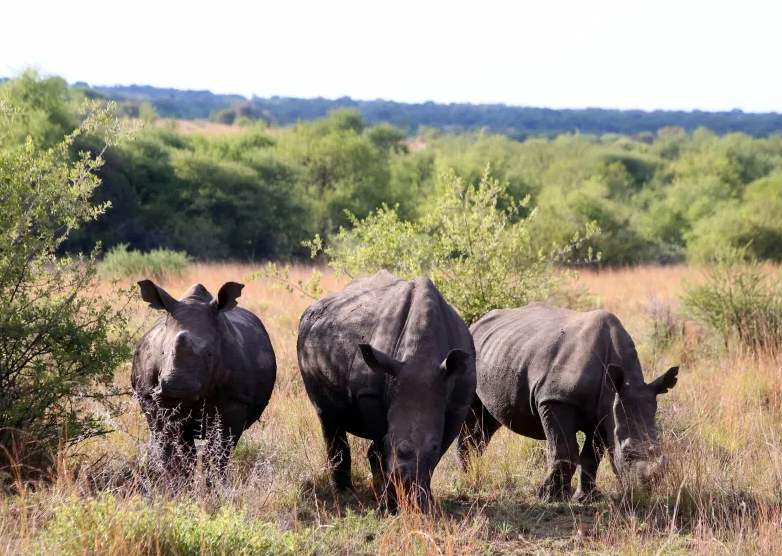