In May, Earthwatch volunteer Holly O’Neal traveled to the Bahamas to participate on the expedition Tracking Sea Turtles in the Bahamas. She shares her experience working with a species that has been around for centuries and the impact that had on her.

I scanned my eyes back and forth across the bottom of the tidal creek. I saw nothing but seagrass. No turtle. Annabelle yelled again. I checked my mask one last time, shoved my snorkel into my mouth, swung my legs over the side of the boat, and dropped into the water.

I turned a rapid 360°. The turtle was disappearing behind me. It was headed for the mangroves lining the creek. With my eyes pinpointed on its shell and adrenaline charging through my veins, I kicked with all my might. The closer it got to the mangroves, the shallower and murkier the water became. The turtle vanished behind a cloud of sand.

Just when I was about to give up, I caught the turtle in the corner of my eye. It was gliding towards deeper water. I jerked to the left. My breath came in gasps. My legs and arms burned. I prayed the turtle would slow down soon.

Suddenly, it stopped by some rocks. I continued gingerly towards it. Instead of darting away as expected, it began crawling slowly along the sand. I swam above it. We zigzagged left and then right and then left again.

The turtle lifted its head toward the surface. My body tensed. Did it need a breath of air? Is it getting ready to surface? It lifted several centimeters off the sand. I tried to remain calm, but my adrenaline buzzed with anticipation.

It began surfacing as if on cue. My mind sharpened; my muscles revved up; the world became silent.

The turtle’s shell grew larger and larger and larger. I made my move. I grabbed its armpits and lifted it into the air. On the boat, Annabelle and my Earthwatch teammates cheered. (Annabelle Brooks is the lead scientist of the Earthwatch expedition Tracking Sea Turtles in the Bahamas and an inspirational woman who devotes her life to protecting marine wildlife.)

Elation filled me—until the turtle started clenching my hands against its shell with its powerful front flippers. 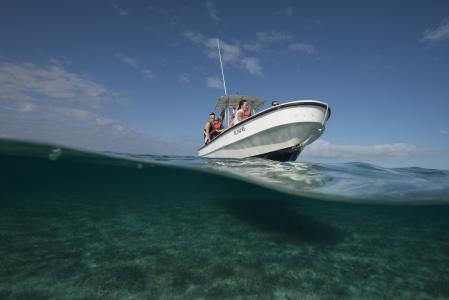 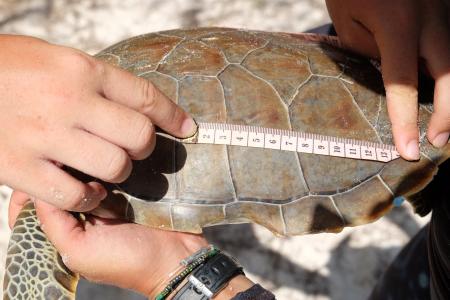 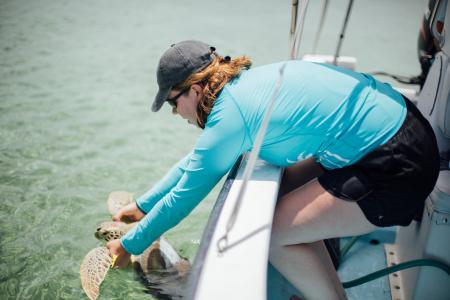 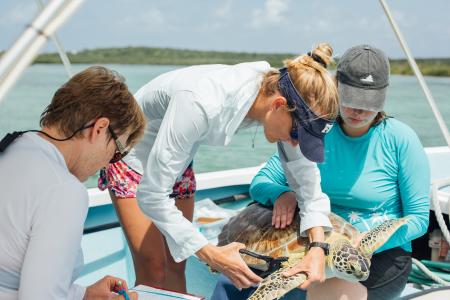 The chase’s purpose made the struggle worthwhile. We were researching green sea turtle abundance in individual tidal creeks along the coast of Eleuthera, an island in the Bahama Archipelago. Areas we determined to be rich in turtles (and conditions favorable to them) would be protected against development as much as possible.

We were also helping Jess, a student from the University of Exeter as well as Annabelle’s assistant, with her research. The year before, Jess had tagged and attached GPS devices to turtles in one creek, displaced them to a nearby creek roughly three miles away, and then followed their movements over the course of several days to determine if they returned to their original home and, if so, how much energy and time they expended in the process. Were they using the energy they would normally have spent foraging, eating, and reproducing? One of her research objectives was to assess displacement as a conservation technique. For example: could scientists relocate sea turtles after an oil spill and expect them to find their way home all while performing functions necessary for the survival of the affected species, such as reproducing?

After we caught a turtle, we’d motor it back to the main boat to tag it or, if it had already been tagged, mark down its identification codes. Sometimes Jess, who was always brimming with enthusiasm, would exclaim, “Hey, that’s one of my guys! He’s still here!” Or, if we caught a turtle who had lost the GPS device during the tracking period and gone AWOL, she’d marvel, “Oh, wow, he did come home.”

We also took measurements of each turtle. Annabelle would call out numbers to the scribes standing around her. She made her voice steady and clear. Her exacting hands were efficient. Lips drawn tight and eyes narrowed in concentration, she worked with a stern expression.

Measurements recorded, Annabelle would kneel down next to the turtle and tenderly run her hands along the bottom of its shell, looking for any scars, scratches, or other wounds. Then she’d gently lift each flipper to make sure the surrounding skin was free of barnacles and abnormal growths (telltale signs of a sea turtle disease that had been spreading through the Bahamas). By this point in the process, her hands had transformed from those of a meticulous scientist to those of a nurturing mother. And in her eyes, soft with love, was the urgent wish for the turtle to be healthy.

Although measuring the turtles temporarily made me feel like a scientist, I valued my non-analytical time with them much more. The rides back to the main research boat gifted me with this time. After I had crawled into the boat and stopped panting, Jess would arrange the turtle belly-up on my legs. Then I’d begin marveling at the creature in my lap.

Its eyes were jet-black like onyx gemstones. The bright white bottom of its neck, flippers, and tail formed a stunning contrast with the green and yellow scales covering the upper side of its body. The bottom of its shell was an intricate maze of seagrass stains, scars, and other marks from journeys I’d only be able to make in the wildest, most improbable of my dreams.

I’d carefully turn over a flipper to study the weathered skin between the dark green scales lining the flipper’s bottom rim. It looked as if time had written its vast expanse in the wrinkles.

Stories that two other Earthwatchers had recounted the night of our arrival would then come to mind. One woman told of a boy who, while discussing the Earth’s foundation with a missionary, insisted the Earth rested on a giant sea turtle despite the missionary’s attempts to convince him otherwise. Another woman, who had previously worked with nesting sea turtles in Costa Rica, described how, upon seeing the mother turtle’s journey onto the beach to lay eggs as they had been doing for ages, she’d be overcome by a feeling of timelessness as time merged with the night sky and became nothing more than the tiniest of stars to twinkle only occasionally with the faintest of light.

No wonder: sea turtles have traveled the oceans for 220 million years. Feeling the prehistoric blood flow beneath my fingers, I asked myself who was holding who and then saw the actual reality.

I was a millisecond peering over the minuscule walls of my minuscule human existence at the creature carrying me on its flipper, a powerful and simultaneously graceful tool sculpted by what was, for me, an eternity of evolution.

Such intimate time with the turtles was limited. Most turtles outswam me and left me deflated in whatever tidal creek we had decided to tackle for the day. While the others chased somewhere in the distance, I’d float around with loneliness and exhaustion. (Having traveled alone for many months prior to the Earthwatch project, I was ready to be home in the arms of loved ones.)

Although this desire never left, I eventually realized I wasn’t alone. One of Jess’s whoops opened my eyes. It traveled across the waves to me.

My loneliness ebbed; in its place was a string of connection.

Interested in tracking and conserving sea turtles with Annabelle? Check out the project webpage, Tracking Sea Turtles in the Bahamas, to learn more!