My Visit to Malawi—A Trip Years in the Making

In September of 2018, Laura Wing embarked on her first trip to Africa. She shares her experience during 12 days spent on the Earthwatch expedition Animals of Malawi in the Majete Wildlife Reserve. Her arrival was years in the making.

Since I can remember, I have wanted to go to Africa. For some reason, I never found the time or the money or the resolve to make the trip. I know now I was procrastinating due to repeated cautions of getting malaria, yellow fever, getting shot, bitten by a scorpion or worse poisonous snake and besides, Majete Wildlife Reserve is ‘hot’ and dry—90 to 100 degrees most days at this time of year.

Africa is not for the faint of heart.

Field team member Sally Reece picked up Chris, the other volunteer, at the airport and later myself at my villa in Blantyre in a well-worn, 4-wheel drive vehicle. We drove out of the street madness in town and turned onto a two-lane road that snakes down a very steep embankment into the Shire River Valley 40 km away, getting noticeably much warmer, and the countryside more rural and poor.

At the bottom, we crossed over the Shire River and drove a while longer on wide, dusty, dirt roads through the electric fence that surrounds the wildlife reserve, reaching the thatched roof entrance and our single-person tents—our home for the next 12 days. The fence had two sets of sensors above and below to keep all sizes of wildlife and visitors together inside, and more importantly, keep the poachers out. 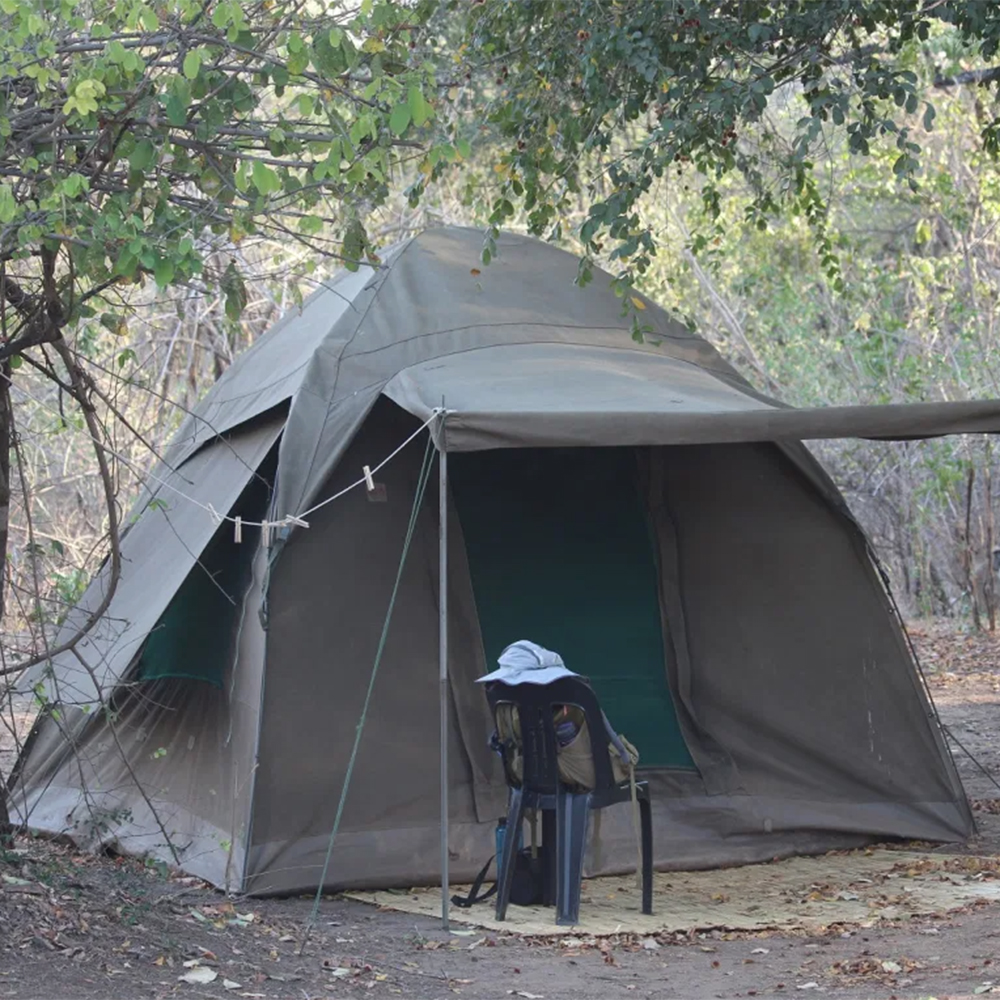 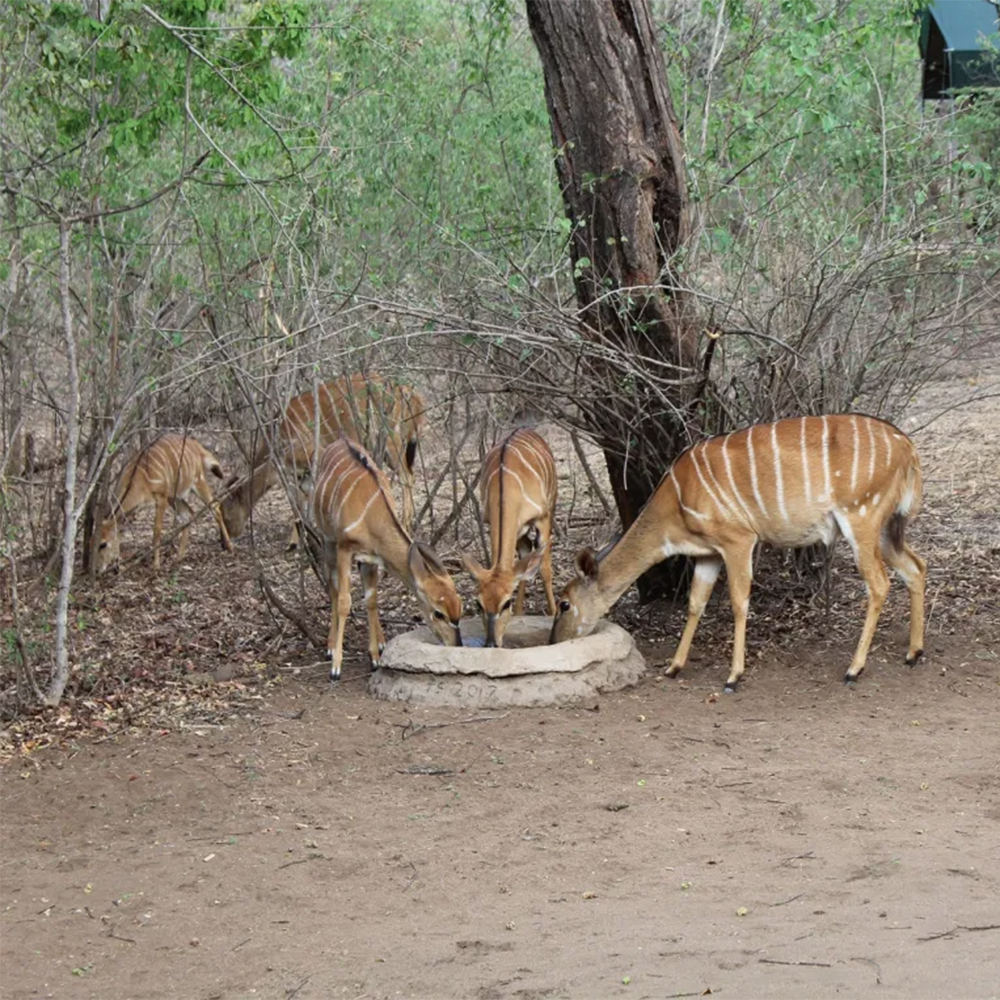 Our camp was shared with the public, and we had frequent visits from warthogs, baboons, and the occasional elephant that required hyper-vigilance at night, and a strong flashlight for the nightly visit to the loo. Over time, emerging from my mosquito net to face the bugs was the bigger challenge, with the grunts of the warthogs and tipping of garbage cans by the baboons becoming comfortingly familiar.

Each day was different and offered a variety of wildlife viewing experiences that never got old. Timid nyala antelopes came to drink, unafraid, every morning at a large birdbath on the ground outside the open flap of our research tent a few yards from the breakfast table. They were followed by a range of bird species and then wasps of all sizes and shapes. We were constantly filling the bath with fresh water from our wilderness kitchen sink.

There are several artificial watering holes in the park where animals come to drink, bathe, and cool off during the dry season. We spent two days, sunrise to sunset, at two separate watering holes recording on our data sheets what came, who drank, and how long they stayed. We later entered that data into the computer at night. The first waterhole was located near the entrance to the park, where the ‘wild’ animals had been habituated somewhat to seeing people, the occasional car and park rangers. The waterhole had a thatched roof ‘hide,’ a type of treehouse 10 feet above the ground that kept us safe, concealed, and amazingly cool on a very hot day as we made our observations. 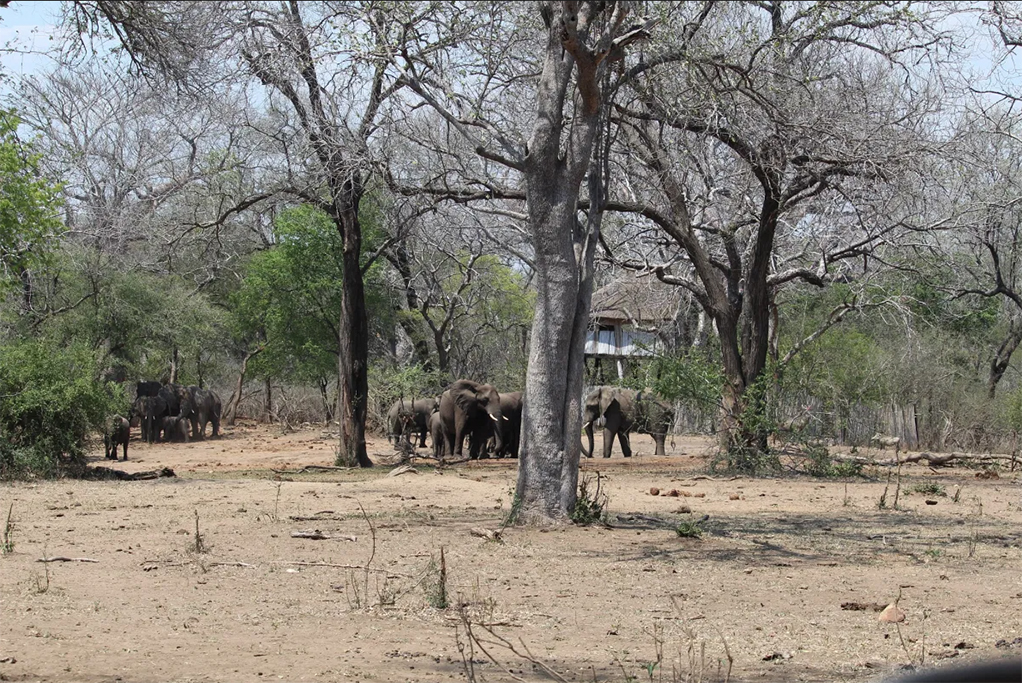 We were told to record every animal that came to the watering hole except baboons. That day, this included countless warthogs, impala, sable, nyala, zebra, hartebeest, kudu, and elephants – the latter were treated with the most caution by all other species. At the end of the day, a small herd of water buffalo appeared and drove everything else away but for the baboons who continued to prune and croon in the trees just out of reach. The elephants had left by this time.

I felt some anxiety at first – to have to sit for so long, and get up so early, and climb down a ladder and quickly and quietly pee behind our jeep near an elephant haven during the day. Keeping track of all the warthogs’ comings and goings, not knowing if they were drinking, which we had to record, and bathing, which we didn’t have to record, was tediously frustrating. But as the day went on, I seemed to slip into a natural cadence of life, in time with the rising and the setting of the sun, in time with the constant flow of movement jockeying for position before me.

It seemed to me we were all there for the same reason, man and beast, to get on with our day and find what we needed to feed our bodies and our souls. Of course, there was no hiding from the wildlife. They all knew or suspected we were there, especially the elephant in the late afternoon that came up to our hide and gouged out large pieces of bark with his tusks to eat from the baobab tree serving as a main support for our perch and doing so without a care in the world. 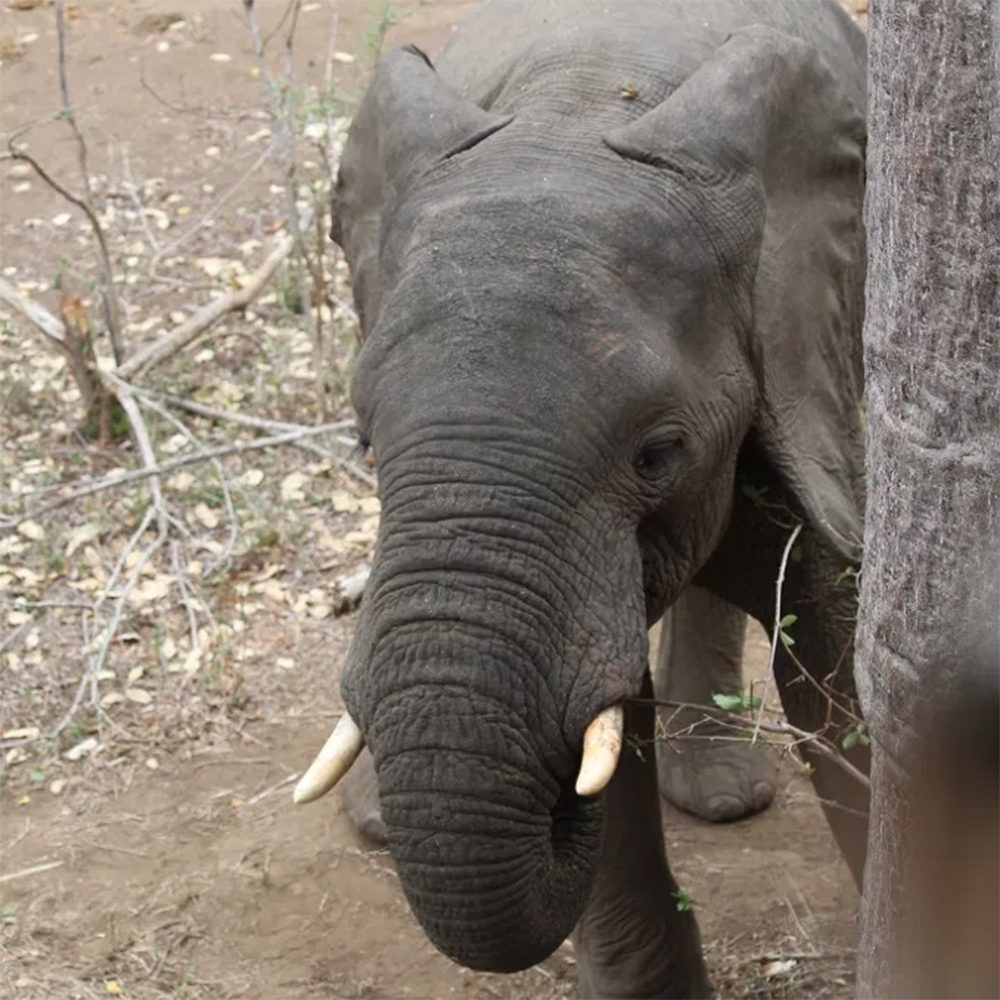 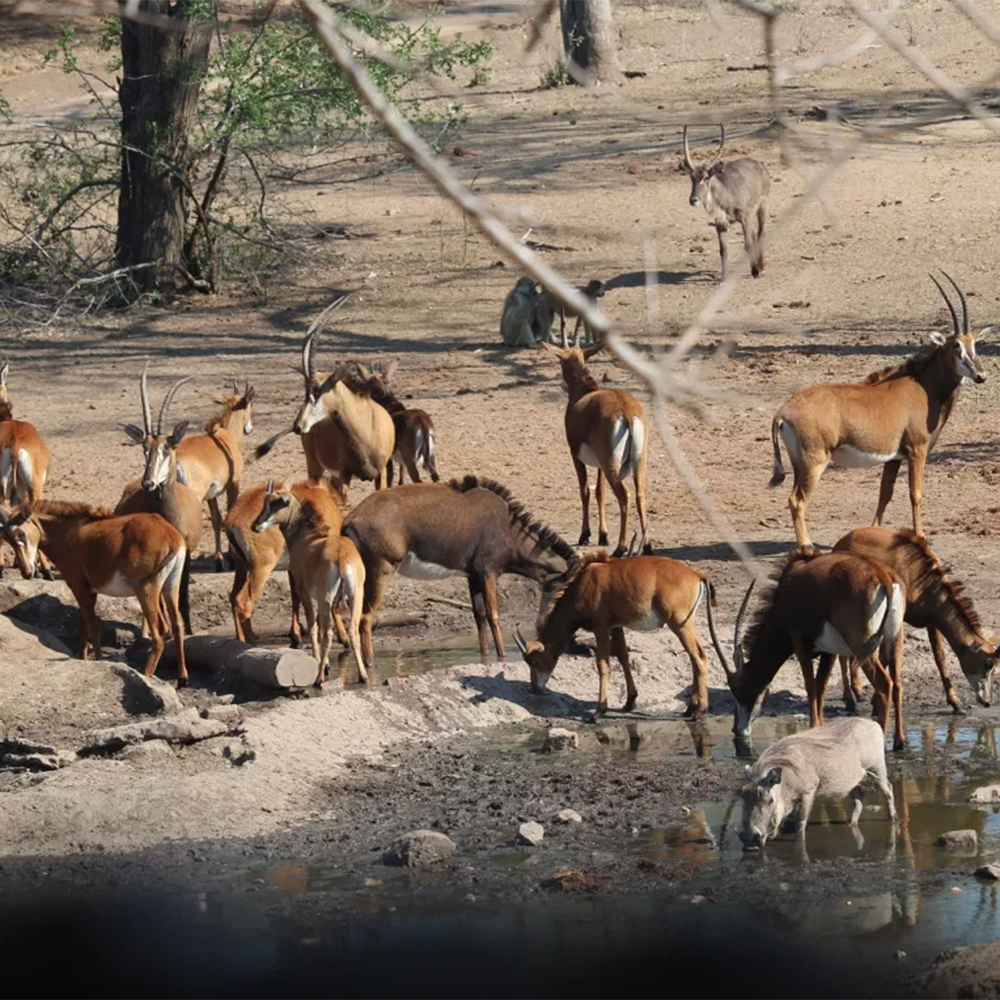 The second waterhole was located on the opposite side of the park, reached by jeep over a long, rugged, dirt road rarely traveled even by park rangers. There were only three of us on this venture: Chris, our researcher Wes, and myself. There was no ‘hide’ available to us here, so we sat in the car most of the day just off the road a bit further from the watering hole than before, but close enough to see. The vista was flatter, broader, deeper, and noticeably wilder than at the other location so we could see more animals from longer distances as they approached. This included animals coming from the sides, as well as from behind, which led us to close up the back of the jeep we had left open for easy access to lunch!

By this time in the trip, I felt so much a part of this magnificent landscape that our precautions were experienced with eager anticipation of what may unfold before us. We saw all the same species in much larger numbers with the rare addition of two lionesses and eventually the lion himself slowly approaching the waterhole in the late afternoon. The first lioness came out in a surprise rush toward what appeared to be a warthog. It was hard to tell, but she missed her mark. Shortly after that, a very large herd of water buffalo kept coming for what seemed like an hour or two, numbering in the hundreds, one after another from a long way off. The lions hid close to the buffalo behind natural barriers and watched the progression, I thought very similar to us, in their own time, with their own instincts at play. In the end, the lions moved on to another day and so did we. 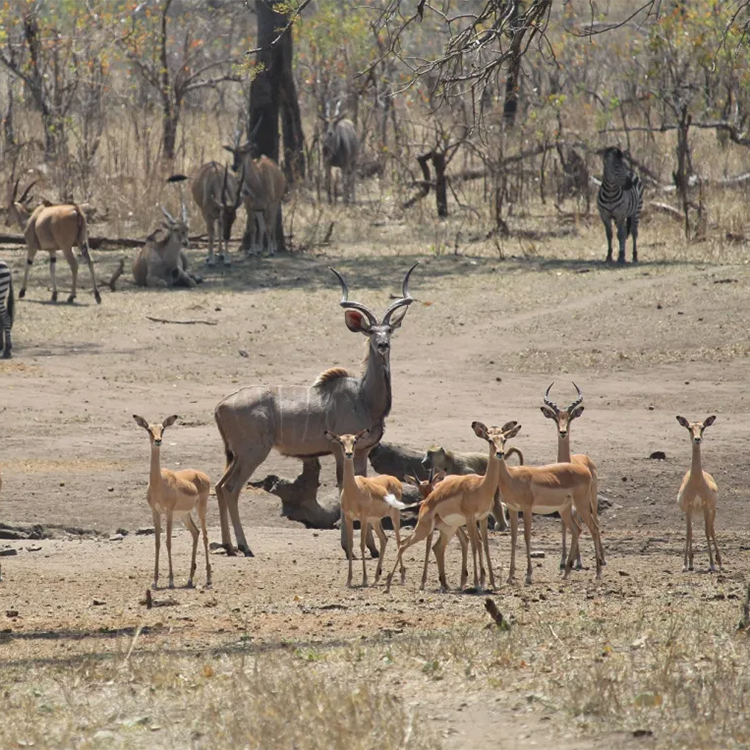 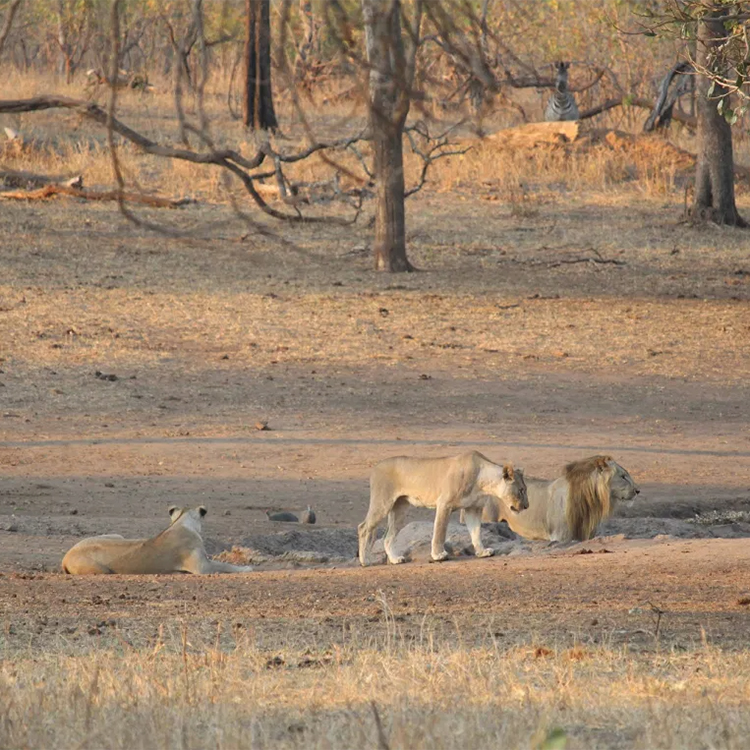 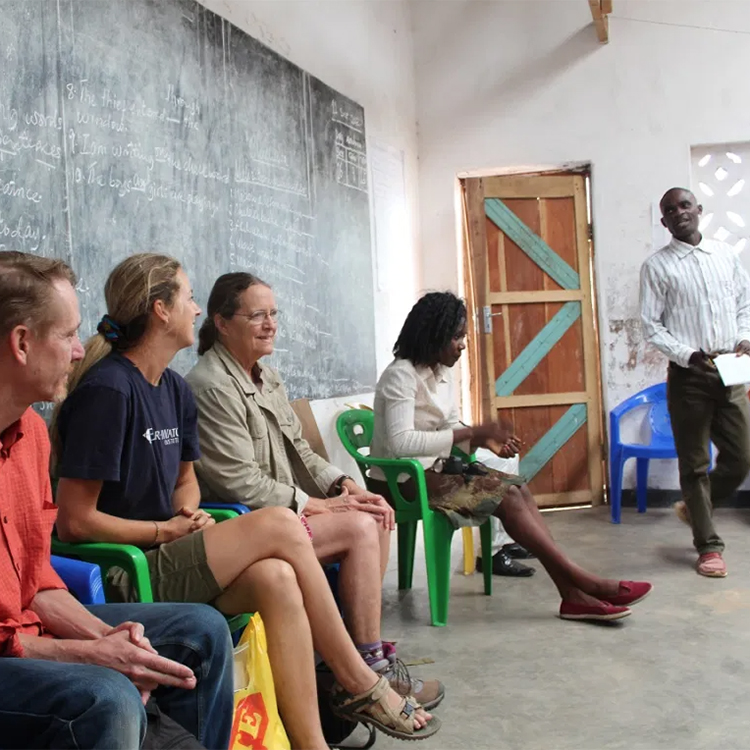 That leaves 10 more days to tell, one being our day off, the afternoon spent in a small boat driving against the strong current of the Shire River looking at hippos and crocodiles up close. That same morning, we went to see a local village just outside the reserve where Chris and I were humbled by the enormous welcome given by all the people there who had so little but gave so much. Toward the end of the trip, we spent a day visiting a school in another village deep in the bush after driving on a long treacherous dirt road. Chris and I taught a class on geography, starting with their village, and moving as far out from it as the students were willing to go that surprisingly ended up with them naming the planets that circle the sun!

I have only one regret about my trip that I will share here – that is that I didn’t go sooner and stay longer. The only real fear I should have had before I made this trip was putting it off for so long that I didn’t go at all.

To learn more about this expedition, visit the project webpage: Animals of Malawi at the Majete Wildlife Reserve.