For this week’s blog, my intention was to share the adventures of Carol Sellers who recently returned from Egypt on her 6th Earthwatch Expedition, Red Sea Dolphin Project. While gathering details from that adventure, I discovered that her first expedition was taken twenty years ago: Madagascar Lemurs. As a result of this trip to Madagascar, Carol’s daughter Laurel launched a fashion accessory business in New York, importing the works of artisans from Madagascar. Today, Laurel’s company, Mar Y Sol, provides jobs to hundreds of Malagasy artisans who make raffia hats and handbags sold across the globe.

I never would have learned Laurel’s story if not for hearing Carol’s first. It is truly amazing how participating in an Earthwatch Expedition can change your life, as well as the lives of those you interact with—now, and for generations to come. You’ve got to read this…

Carol Sellers was interested in volunteering for the Red Sea Dolphin project because she had yet to be to Egypt, and she was eager to snorkel in one of the top dive destinations in the world while participating in cetacean research.

The research team coordinated its efforts with the Egyptian environmental conservation organization HEPCA, the Hurghada Environmental Protection and Conservation Association. The expedition team was led by principal investigator, Marina Costa, three Milanese researchers, and a British Earthwatch representative. Five Earthwatch volunteers were also on this expedition, including 2 students. Carol Sellers described her experience.

“We received a warm reception as we arrived on the comfortable dive boat that was to be our home for the duration of the expedition. Our days started early as the sun rose and the rumble of the engines started. We had a variety of research tasks, including water and sky observations, hydrophone monitoring, recording data and observing interactions between day trip snorkelers and spinner dolphins who rested in sheltered lagoons during the day.

Many pairs of eyes scanned the sea as we zigzagged along transects watching for fins breaking through the waves. Shouts of a dolphin sighting brought the engines to a halt as everyone hung over the guard rails with cameras and delighted smiles. ‘Count them!’ Marina shouted. ‘Take photos, so we can identify the pods.’ No easy task, as the dolphins slipped under the boat and reappeared to ride our bow waves. We had another chance to do our counts in the afternoons as we snorkeled with them in the quiet lagoons.

To see these amazing mammals swim close enough to reach out and touch them was mesmerizing. Participating in assessing cetacean abundance in a region where no previous research has been done was especially meaningful. Snorkeling along the pristine reefs, we were rewarded with sightings of reef sharks, lion fish, eels, blue spotted feather rays and sea turtles as well as spectacular healthy corals.

Snorkling with Dolphins in the Red Sea

In the evenings we had talks and slide shows from various team members on cetacean behavior, coral bleaching, and other scientific topics. All too soon, we were celebrating our last meal together, sharing photos for a memorable take-home DVD, and exchanging emails and well wishing to new found friends from around the world. The memories of this adventure have enriched my life as have each of the previous five expeditions in which I have participated over the past 20 years.

You never know what impact your trip may make on the world. I feel privileged to support this worthy organization and hope to share in more trips in the future.”

Laurel Brandstetter, Carol’s daughter, has never been on an Earthwatch Expedition. But her mother and step-father, Jim Sellers, joined Earthwatch’s Madagascar Lemurs project two decades ago. Jim Sellers was so moved by the plight of the people of Madagascar that he retired early as an engineer from NASA to help them. Twenty years later, Jim’s step-daughter, Laurel, carries out this mission through a company she founded called Mar Y Sol—translated from Spanish to English as Sea & Sun.

Jim Seller got himself involved in many initiatives to support the people of Madagascar.  For instance, he set up an NGO called Starfish that provided medical volunteers and supplies. He was involved with donating bicycles. And he developed partnerships leveraging the work of local artisans, such as pressed wildflower paper, that he sold in the U.S. at local gift shops to raise money for the Madagascar. Jim raised anywhere between $10k and $30k a year from the sale of his wares.

Laurel was a city planner in New York City, but had previously worked at the grassroots level as a community organizer in Cleveland. After traveling to Madagascar to help Jim fulfill orders, she became disenchanted with her job and quit—armed with a much stronger understanding of what “grassroots” really meant—and got involved with her step-father full time.

“I had no money, no business background, and no knowledge really,” Laurel explained to me. “I was looking for something to sell and import to the United States, and I started seeing beautiful colored baskets and handbags in Madagascar. I brought samples back home to New York and started selling at street fairs and at parties at my house. I started thinking strategically about how I could make the product more sellable. One of the most exciting parts of the job is the cross-cultural exchange of ideas. What might be a basket in Madagascar can be folded into a clutch (purse) in the US.”

Laurel founded Mad Imports in 2003, and brought an intern aboard. Strapped for cash, her intern’s mother loaned Laurel $3k to do her first trade show, where she received her first batch of retail orders, and sales have doubled each year since. Today, the company goes by Mar Y Sol, and co-designs and co-creates authentic accessories made by hand using natural materials sourced sustainably from Madagascar’s precious forests. The sale of their products enables families to gain economic independence and promotes environmental conservation. This is achieved through fair trade partnerships with artisans who make a living wage through their “trade not aid” business model. For 2012, Mar Y Sol sales are expected to surpass $1 Million, with one-third to one-half of those dollars going back to Madagascar.

As Laurel put it, “Every year that I’ve been to Madagascar, I take loads of resources-magazines, design materials and art supplies and give free workshops to other artisan groups and girls at orphanages so they can have tools to make their products more marketable to tourists. I think there’s a lot of value is in the cross-cultural exchange and information sharing.”

Laurel closed with, “The artisans keep asking for more orders so they can take of themselves!” 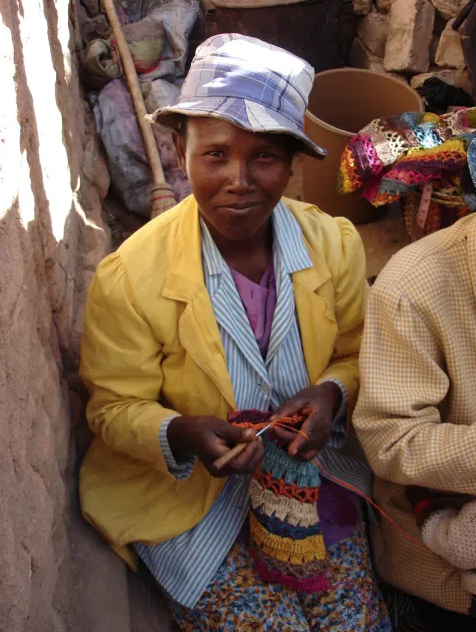 While the Madagascar Lemurs research project has concluded, it did pave the way to the current Earthwatch Expedition, Carnivores of Madagascar, created to allow volunteers to help monitor Madagascar’s mysterious predator, the fosa, and protect its fragile island habitat.

Earthwatch Expeditions open the door for connections that otherwise would have never have been identified. With this blog named “Unlocked,” it has never been more accurate than after hearing this story of a mother influencing daughter (via step-father). We never really know the impact Earthwatch Expeditions have years later, unless volunteers share those stories with us.

If you have a story of how an Earthwatch Expedition has inspired you, we’d love to hear it. Shoot us an email at info@earthwatch.org.