In April 2018, Marc and Peggy traveled to Cuba to participate on the Earthwatch expedition Mapping Biodiversity in Cuba. Learn about the experiences they had conducting critical research while immersed in the beauty of this Caribbean country!

We have long been intrigued with visiting Cuba but strained relations with the United States had prevented us from doing so. Things have changed in recent years, opening a window of opportunity to visit this island nation. When we saw that Earthwatch, an organization that we have traveled with in the past, was offering a trip there, we jumped at the chance. On this expedition, we’d have the opportunity to map some of Cuba’s amazing array of biodiversity. We flew from Newark, New Jersey directly to Havana and in 3 hours, it felt like we had stepped back in time. Havana is known for its vintage American cars and there was no shortage of them on the streets. 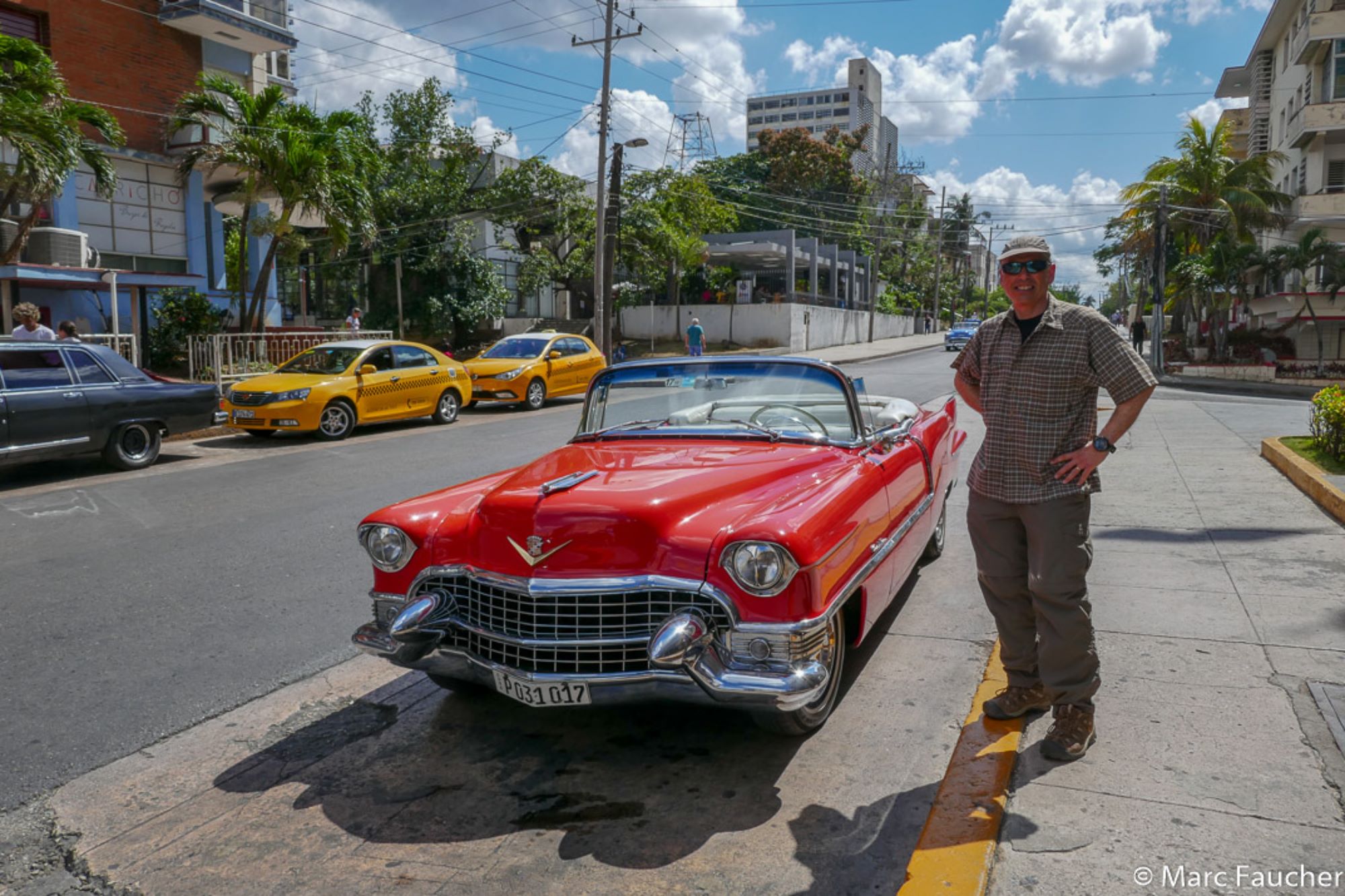 The next morning, our team assembled at the hotel. It consisted of nine volunteers from all over the United States and our assistant Principal Investigator (or PI), André Baumgarten, who works for the Wildlife Conservation Society (WCS) in New York City. He was filling in for Dr. Natalia Rossi, our lead scientist, who was unable to be with us at the start of our project. We were also joined by Tomas Cabrera, a Cuban herpetologist, and Ariadna, a Cuban tour guide who would accompany us on our entire trip.

We took a short detour to the town of Palpites, the home of Bernabe Hernandez Ulloa, where the world’s smallest bird is known to frequent. Here we met more members of our team: Jeff, a videographer from WCS, and Maydiel Morera, a Cuban bird guide. A garden had been planted with Firebush (Hamelia patens) and many hummingbird feeders had been set up to attract the birds. We were seeing the more common Cuban Emerald but where was the Bee Hummingbird? Finally, a female made an appearance and then a male with his brilliant ruby throat! 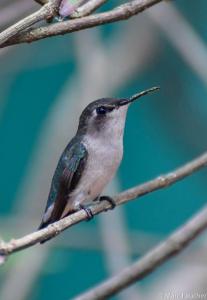 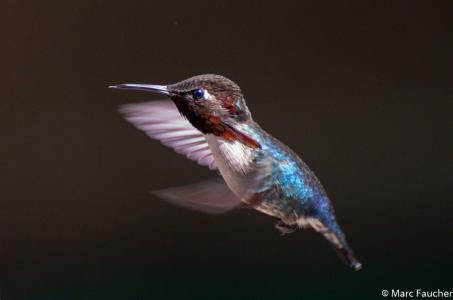 We finally reached the Jarico Research Station in the Lomas de Banao Ecological Reserve around 5:30 in the evening and checked into our very comfortable rooms.

We met even more members of our team, Maikel Morera, an ornithologist and his wife Lucia Schwesinger, a botanist. What a privilege to be working with so many Cuban experts in the field! We were eager to get started but that wouldn’t happen until the morning. After a hearty breakfast and a hot cup of coffee, we assembled in the visitor’s center for an orientation. Chino, the technical specialist for the reserve, gave us an overview. Created in 2010, the Lomas de Banao Ecological Reserve protects 6138 hectares of the Guamuhaya Mountain Range. The Reserve harbors a staggering 500 species of plants, 88 species of birds, 24 species of reptiles and 17 species of amphibians many of which are endemic to Cuba. Maikel gave a talk on birds, Tomas gave a talk on reptiles and amphibians and Dr. Pedro Gutiérrez, the last member of our team, gave a talk on plants. 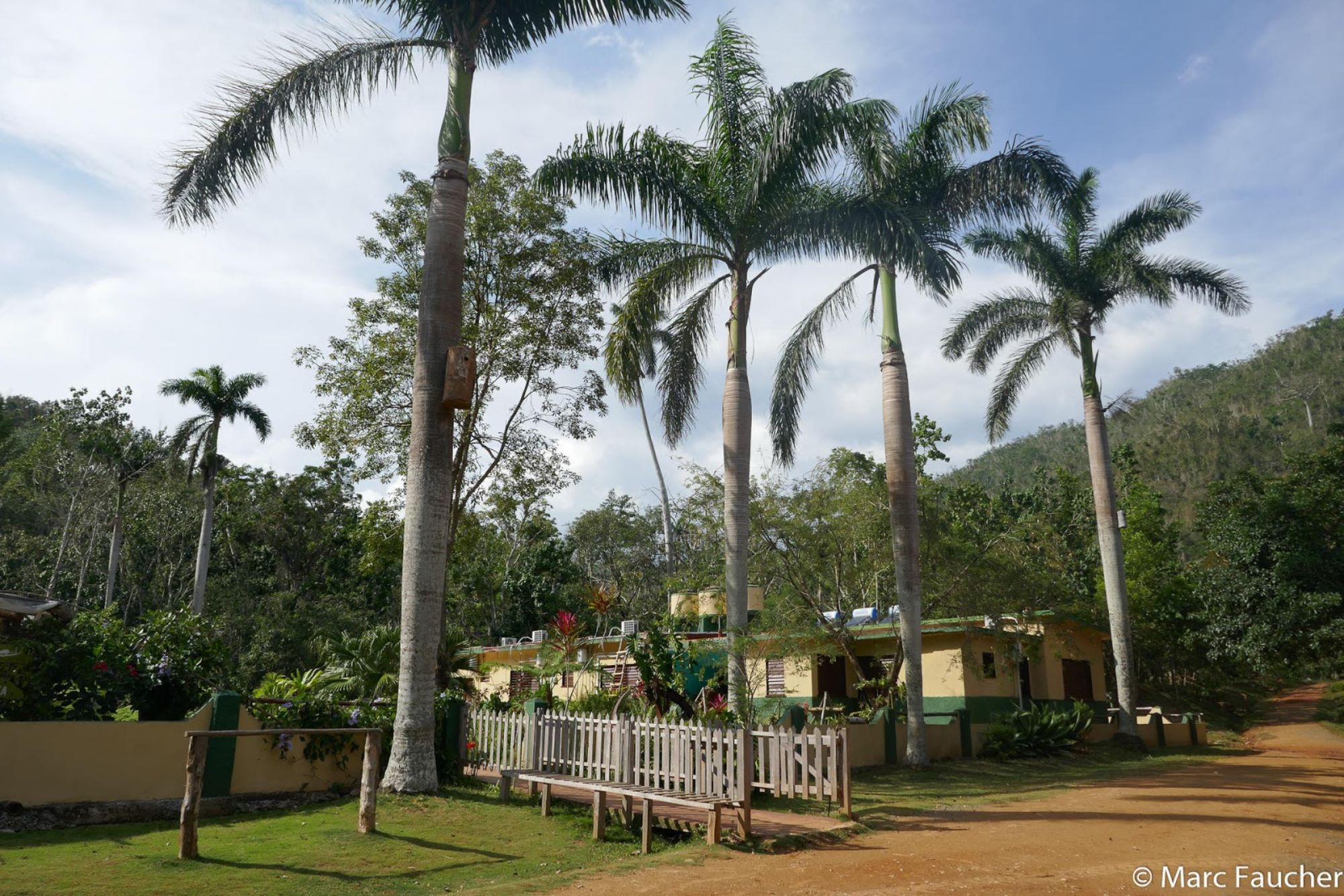 Armed with all this new information, we were now ready to start our field surveys but not before passing one critical test. That afternoon, Maikel took us out on a trail behind the station to practice spotting birds in the dense forest and judging their horizontal distance from the trail. It sounded easier than it was. The twist was that the birds were nonvocal and stationary and were actually beer cans or rum bottles that Maikel had placed along the trail. After locating the pseudo-avians, we had to estimate how many meters from the trail they were. We all passed the test more or less and were now prepared to perform our bird counts over the next few days.

We divided into three teams and were given a survey schedule. Allyn, Marc and I formed Team Trogon. The following morning we joined Tomas to survey reptiles along Transect 2, a 0.5 km stretch of trail north of the research station. We had to wait until mid-morning in order for the lizards to warm up. During our survey, we counted a total of 35 reptiles, all Anole lizards representing three species: the Cuban Brown Anole, the Cuban White-fanned Anole, and a single Cuban Green Anole.

The males would extend a flap of skin, normally folded under their throats (called a dewlap) during territorial disputes with other males or perhaps to entice a female. I referred to this behavior as “dewlapping” which Tomas liked and decided to adopt. Marc was then challenged to photograph a male while he was “dewlapping”! 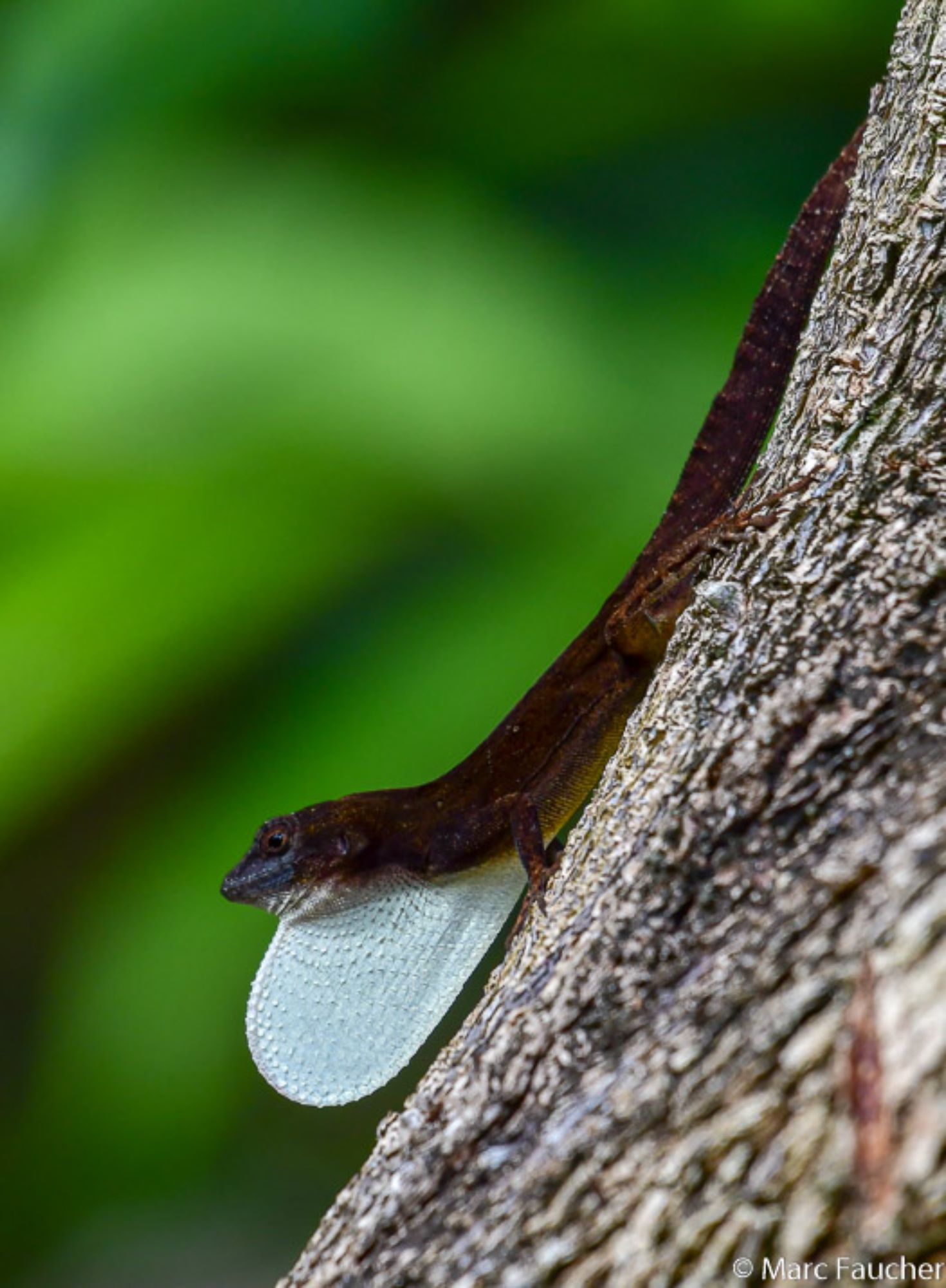 During our survey, it was hard to ignore the Cuban Trogons, a beautiful bird endemic to Cuba. During this time of year, they are very vocal and active as males compete with each other for females and prime nesting spots.

After lunch, we reassembled to plant Firebush. By now, we had learned that this plant is an important food source for birds as it has fruit and flowers year round. Thirty-seven bird species, including 6 endemic species, use Firebush and hopefully, these plants will attract some of these species to the research station.

After dinner, we returned to Transect 2 to conduct a night survey. A whole host of different herps come out at night. Maydiel joined us and found a Giant Trope also called a Cuban Dwarf Boa. Although by no means giant as they only grow up to 100 cm in length, it is the largest of Cuba’s Trope species.

As we resumed our survey, Maikel came running up to us with a white bucket. Excitedly, he revealed the contents, a Cuban Tree Boa that he found near the Research Station. Up to four meters long, the Cuban Tree Boa is the island’s largest snake and a top predator. In May 2017, a study from the University of Tennessee was released indicating co-operative hunting of fruit bats in this species, the first documented instance of deliberate pack behavior in snakes!

The next day was “Plant Day.” We helped Pedro, Lucia, and Chino survey two 20 x 20-meter plots along Transect 3. The area was very steep and it was difficult for Chino and Allyn to mark off the plot with red tape. We had to record all the trees within each plot that had a diameter at breast height (DBH) of >7cm. Marc took the measurements while I recorded the data with the help of Lucia who identified the tree species. She also took note of the bushes growing within the plot.

The following morning we helped Maikel survey birds along a 1-km stretch of Transect 1. One of the highlights was a Pygmy Owl being harassed by a Cuban Green Woodpecker. In all, we counted 184 individual birds representing 23 species. 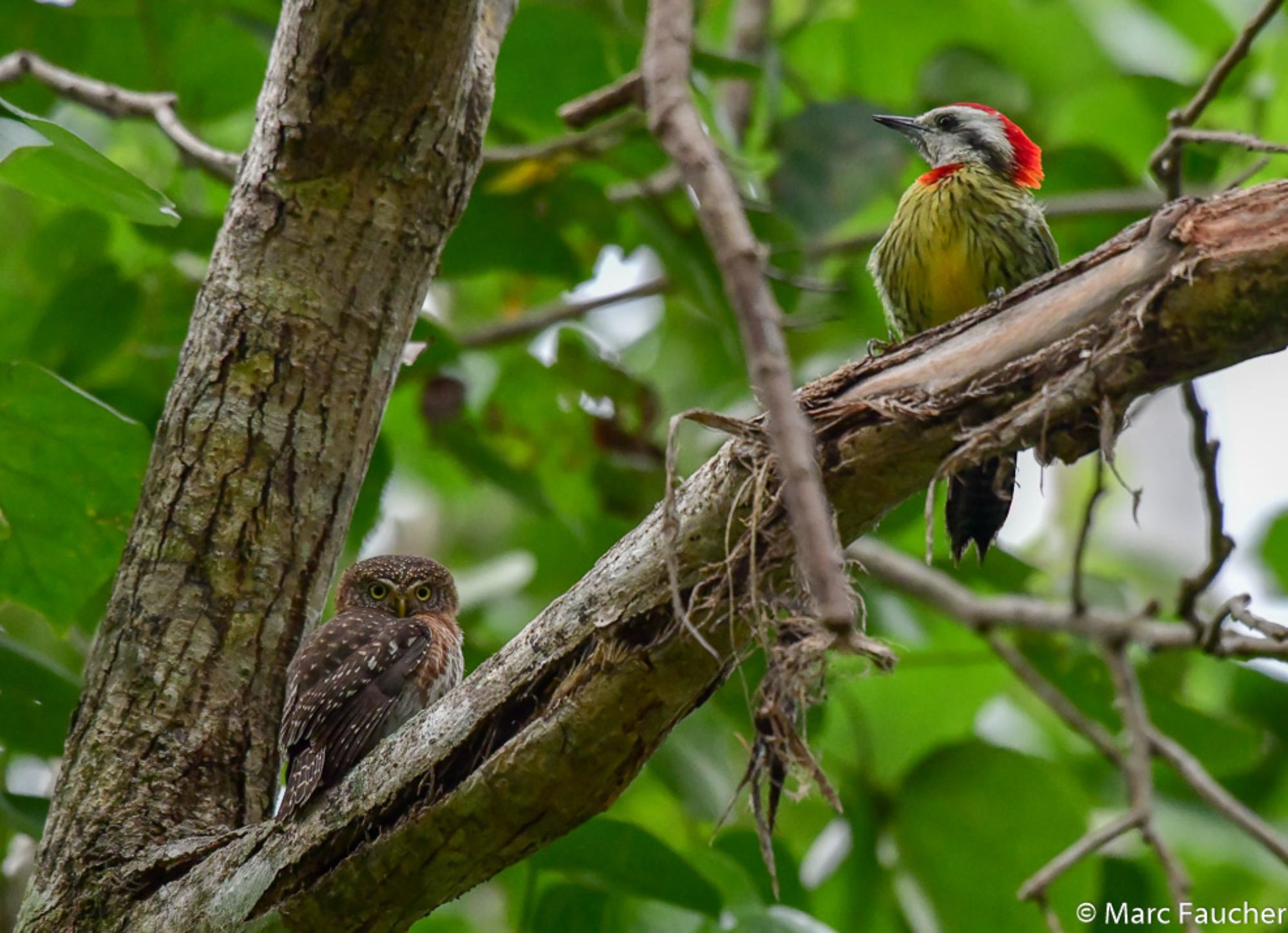 Early the following morning, we prepared for our transfer to La Sabina Field Station, about a climb of 400 meters from the Jarico Field Station. We traveled on foot while our gear was carried by mules. We followed Chino and asked him to point out the tree where a hutia was known to live. I had never heard of these animals before and learned that there are seven species of these rodents living in Cuba. We stopped at the tree but the resident wasn’t home – bummer! Just then, he poked his head out from a higher hole. Yes, it was a Prehensile-tailed Hutia (Mysateles prehensilis), a new mammalian species for us!

We arrived at La Sabina around noon and sat on the front porch admiring the stunning view. After settling in and having lunch it was time to get to work. We were on plant duty so we set off with a group of 11 to survey two plots along Transect 1. The first was in the area of an old cattle ranch. Back in the 1960s and 1970s, cattle were grazed here and Caribbean Pine trees (Pinus carribbea) were planted. The cattle were removed but the pines were allowed to stay although they aren’t native to this area or Cuba.

Early the next morning we woke to a dense fog. It delayed the start of our surveys. The herps were slow to get moving today and we only saw 14 individuals, but we did find two new species: the Escambray Blue-eyed Anole and Blue-eyed Twig Anole.

When we returned to the research station Natalia had arrived and we finally got to meet her. That night we did our final herp survey along Transect 3. As Tomas predicted, there were many frogs in this area. I counted around 57 individuals representing seven species, including five species of frog that were new to us. They were very tiny making them difficult to spot. 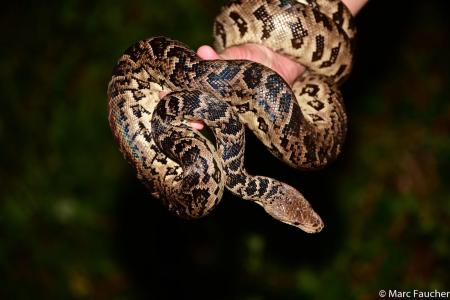 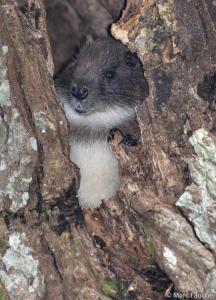 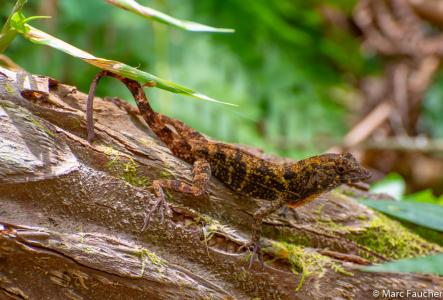 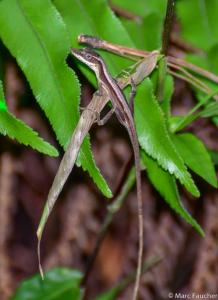 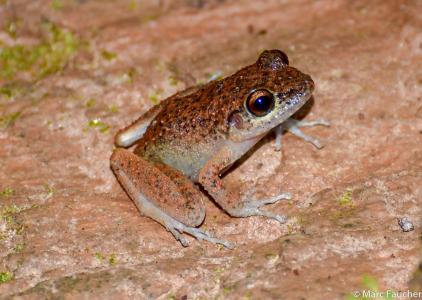 The following day, we conducted our final survey of the expedition. We helped Maikel and Natalia count birds along Transect 2. We saw only 16 species but around 88 individuals. To see a complete list, check out our La Sabina eBird List.

The next morning, we prepared to leave La Sabina and hike back to the Jarico Research Station. We assembled for a group photo on the front lawn of this spectacular place.

We hope this data will be useful in helping to protect the Lomas de Banao Ecological Reserve. A heartfelt thanks go to Earthwatch, the Wildlife Conservation Society, and the Cuban scientists who made this project possible.

To learn more about Peggy and Marc’s experience and to see more photos, check out their World Travel blog. 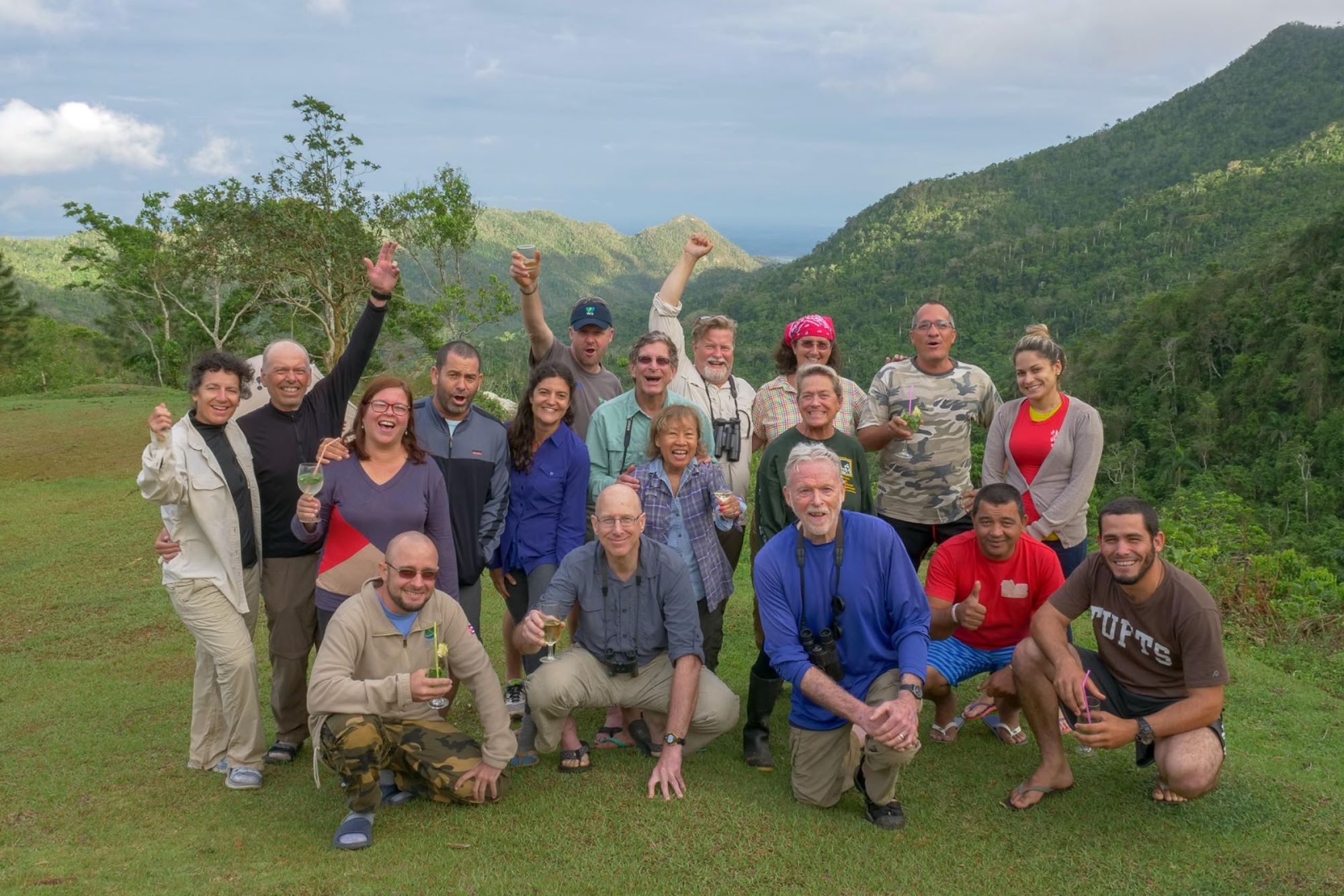