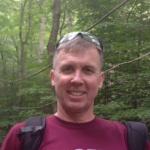 Why the transition from the military to environmental research?

As a child I was introduced to the environment through backpacking and camping in the Sierra Nevada. I was fortunate to maintain my environmental passion through academia. While earning my doctorate and studying the use of Light Detection and Ranging (LiDAR) for measuring forest biomass, I took two fateful elective courses: one a forest policy class, the focus of which was on the Endangered Species Act and wolves; and the other a course on trophic cascades. Later, while serving in combat in Afghanistan a friend sent me pivotal books to read (escape) on biogeography and mammal ecology. The fuse was lit igniting my ambition and dedicating my life to environmental and geospatial research.