Alcoa Foundation Invests in Employees and Global Sustainability with Earthwatch

Each year, through a partnership with Earthwatch, the Alcoa Foundation sends Alcoa employees from around the world to a region where the signs of climate change are most pronounced – from the edge of the Arctic to the peaks of the Pyrenees. These fellows spend 10 days working alongside expert scientists to collect critical environmental data that can be used to inform climate change policies – both regionally and globally. In the evenings, the fellows attend lectures and exchange ideas to build their knowledge on the importance of global environmental sustainability. The fellows return to their offices and communities equipped with the tools they need to make both their workplaces and communities more sustainable.

“There is a kind of magic that appears when Alcoa employees who work for the same corporation but do not know each other start finding commonalities,” said Dr. Bernat Claramunt Lopéz, Earthwatch lead scientist on the expedition Wildlife in the Changing Andorran Pyrenees. “This shared experience on an Earthwatch project focused on the impacts of climate change facilitates and enhances their commitment to Alcoa and, hopefully, impacts their future actions related to climate change adaptation and mitigation.”

Since 2003, the Alcoa Foundation has supported the Alcoa Earthwatch Fellowship Program, a unique professional development opportunity that sends the Alcoa employees to conduct rigorous climate research while learning from expert scientists. When they return, they develop sustainability projects that are executed in their offices, plants, and communities.

“Not only are we creating sustainability ambassadors, but we are providing a unique opportunity for some of our most high-performing employees to gain knowledge and skills that they can hopefully apply to their home communities at the end of the program,” said Alice Pak Truscott, Senior Manager of Program Development and Communications at the Alcoa Foundation.

“Earthwatch has given Alcoa Foundation the unique opportunity to be able to unite Alcoa employees from around the world, allowing them to meet one another and spend a week doing really meaningful work in some of the biggest issues in sustainability today.” 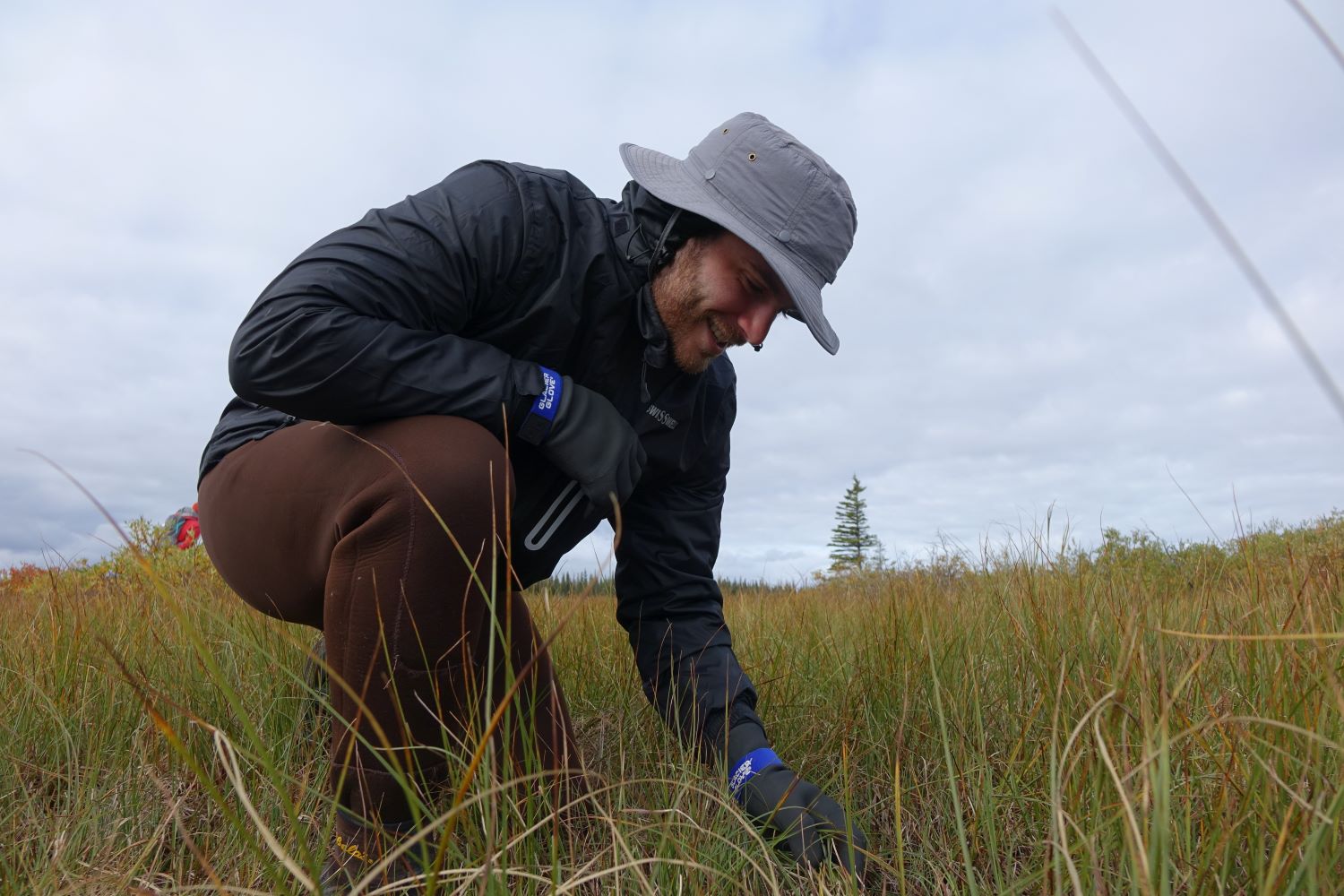 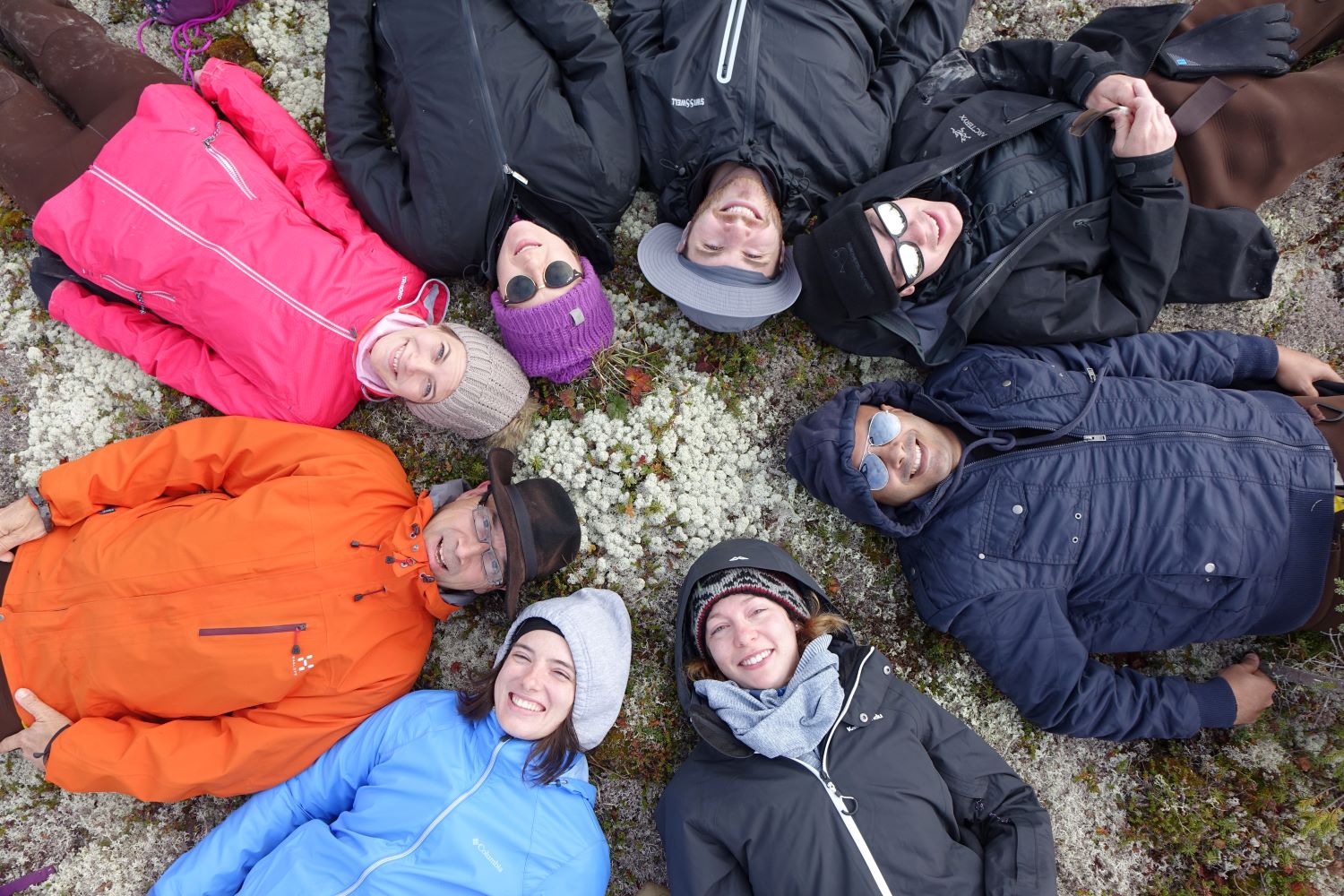 In the fall of 2017, Milt Constantine, senior analyst of corporate strategy in Alcoa’s Pittsburgh office, was selected as an Alcoa Earthwatch fellow. He traveled to Churchill, Manitoba – also known as the polar bear capital of the world – where he joined Earthwatch researchers and fellow Alcoans on the expedition Climate Change at the Arctic’s Edge.

“We got there and it was a terrain unlike anything else I’ve seen in my life – part Arctic tundra, part boreal forest,” said Milt. “It felt like we were truly out in the wilderness. It was a really great opportunity to explore and study natural ecosystems that, for the most part, are untouched by humans.”

The fellows spent the week in the field searching for and monitoring fish and frogs – two indicator species that show how the ecosystem is being impacted; they would identify the species they found back in the lab, and then they listened to lectures about climate change on a broad scale and on a hyperlocal level. Not only did the fellows learn about the scientific process, but they also acquired the tools they needed to relay what they learned when they returned home.

“I think when we talk about climate change, it tends to quickly become a politicized discussion,” Milt said. “Being able to learn about climate change from the perspective of pure science, while also getting to take that knowledge and bring it back to my community was a really exciting opportunity.”

Milt and his colleague Shelley Ranii, who was also awarded the fellowship, returned to Pittsburgh ready to overhaul paper usage at Alcoa’s headquarters. The pair kicked off a campaign to cut down on paper waste, which extended to the usage of paper cups and paper towels to altering the office printer settings. They sent office-wide email alerts and posted signs as part of their campaign. They were able to secure funding for reusable mugs for the entire staff, which led to a 68.2 percent reduction in the use of paper cups. They also gave tips on how to cut down on the number of paper towels used when drying hands, which led to a 26 percent reduction. And to encourage double-sided printing, Milt and Shelley got buy-in from IT to set the default to duplex printing. They saw a 100% increase in the use of this feature. They also made sure all recycling bins were labeled correctly. 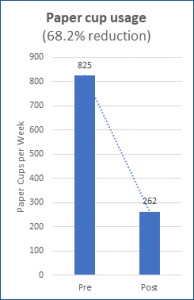 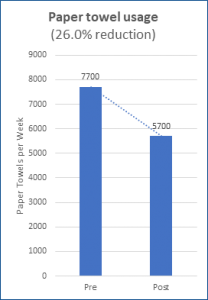 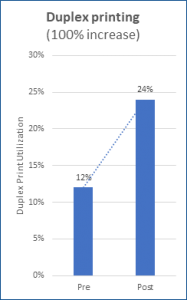 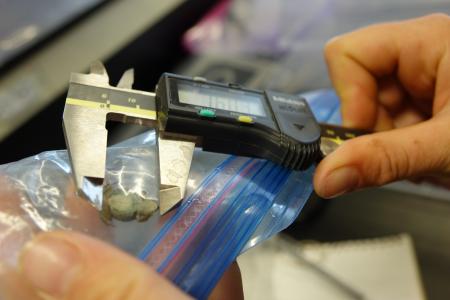 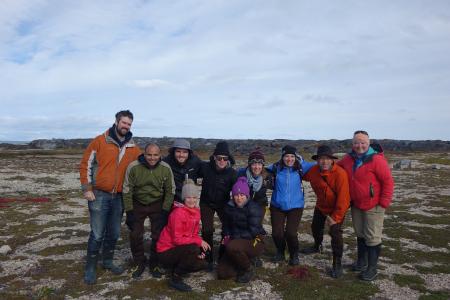 “Almost a full two years later, we still have those signs up that encourage users to avoid paper cups, to use only one paper towel in the restrooms, and to default to double-sided printing,” Milt said. “I think the changes that we were able to introduce have had a positive impact on the employees.”

After tackling their office, the duo organized a community event to clean up a popular trail near their Pittsburgh office and a section of the Ohio River shoreline. They gathered 25 of their coworkers together for a half-day event and were able to collect 2 tons of debris – a huge impact for a half day’s work. “We’re happy to give back to our local neighborhood,” Milt said of the event.

2018 fellow Donna Herum also organized a community event for a shared public space. Donna gathered a group of Alcoans and friends to eliminate two different types of invasive species from a local city park. One of her coworkers had so much fun that he continues to go out with his family and work on this project on his own.

“With some environmental sustainability actions, you know you’re doing the right thing, but you don’t see that immediate impact and it can be hard to know you’re making a difference,” said Donna Herum, a product specialist for Alcoa. “It’s kind of fun to see something immediate and tangible.”

Donna, who has worked at Alcoa’s Warrick Operations in Indiana for 31 years, returned from her expedition Wildlife in the Changing Andorran Pyrenees in September of 2018. In addition to the lectures, she and her team spent the 10 days hiking to different elevations to monitor small mammals such as mice and shrews, track bird diversity, survey vegetation, and measure tree growth. And after long days collecting critical climate data in the field, they spent their evenings working on developing sustainability action plans.

Prior to leaving for the trip, Donna met with different departments in her facility to come up with ideas for her sustainability project that would not just work, but that others would be happy to implement. While in the field, she was able to workshop these ideas with the other Alcoa fellows and researchers, and once she returned to Indiana, she was ready to take action.

The facility where Donna works receives a lot of deliveries. She decided to work with one of their largest suppliers to reduce the number of cardboard boxes used when making these deliveries. She spoke with people from various departments and areas of the plant floor to identify delivery areas where they could substitute reusable plastic storage bins for the cardboard boxes. This solution has had a big impact.

“We’ve eliminated a third to half of those boxes,” Donna said. She says that the feedback she received from her coworkers before undertaking the project was crucial.

“If someone has a passion for environmentalism, they’re willing to do the extra work,” she said. “But if it’s just adding to their workload and they don’t have the understanding or buy-in, it’s not a sustainable solution.” 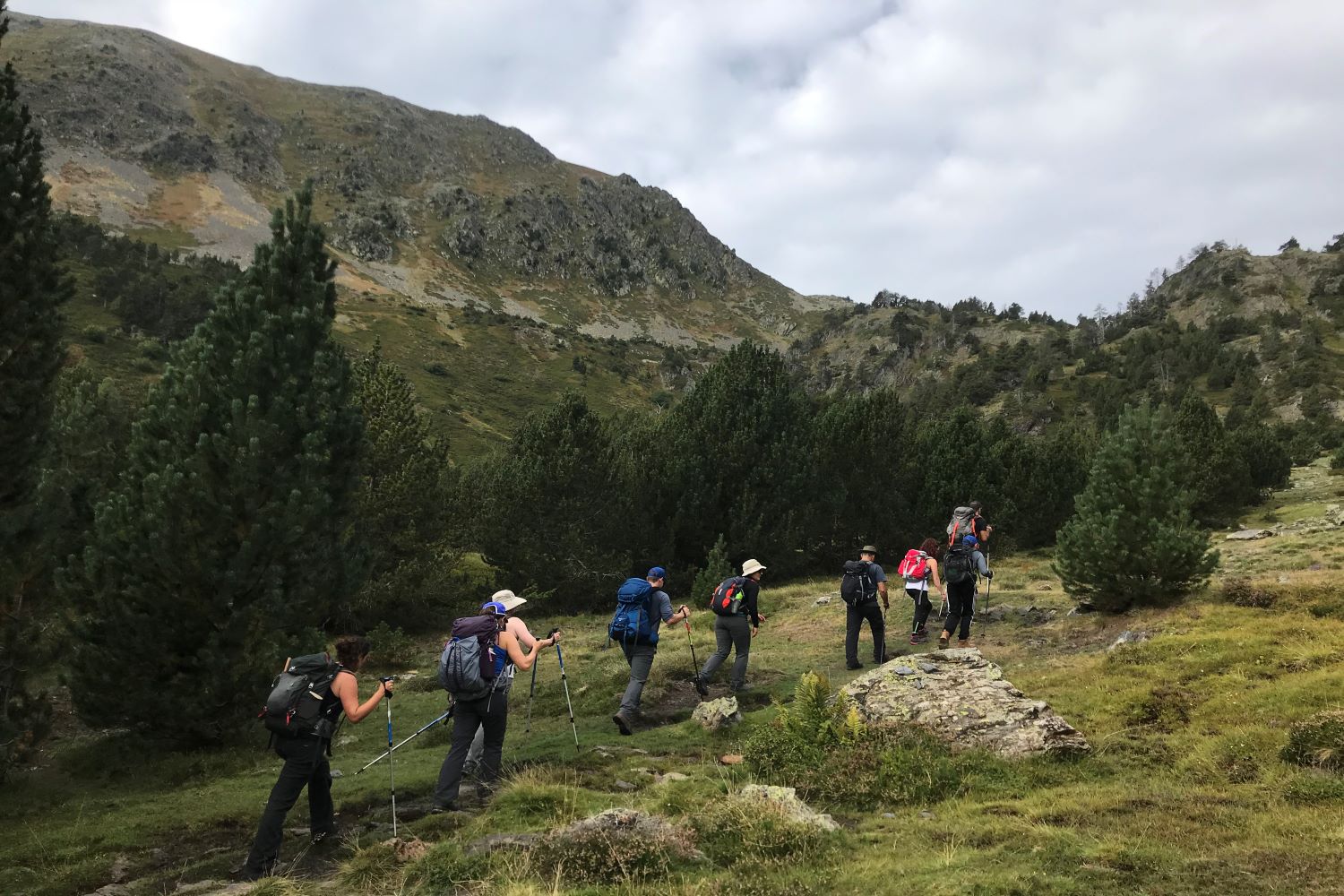 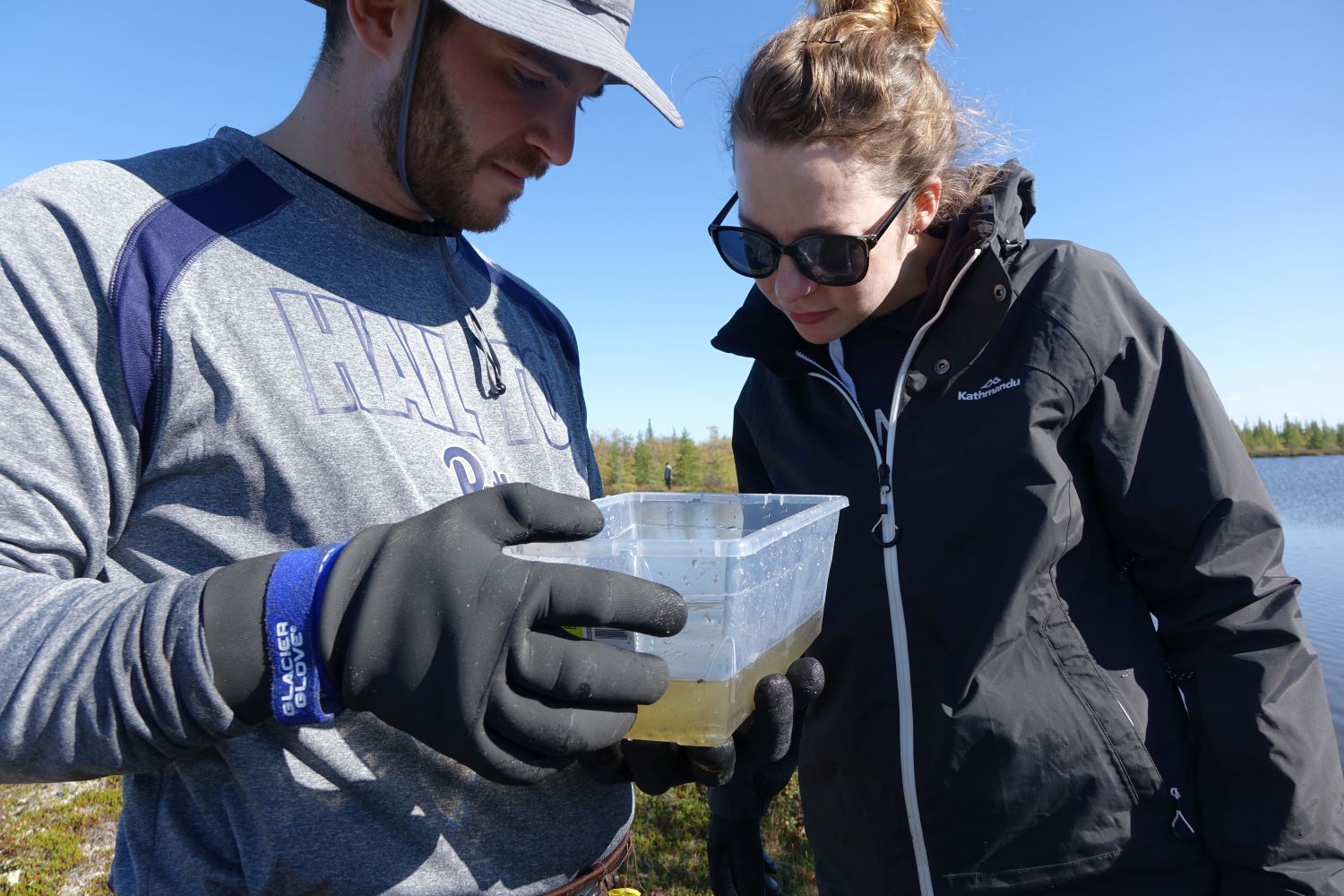 Both Milt and Donna say that in addition to making a direct impact with these sustainability projects and travelling to some pretty amazing locations, a top highlight was being surrounded by fellow Alcoans who they wouldn’t have otherwise met.

“Shelley and I were coming from a corporate office in Pittsburgh, but there were also employees who were working at our facilities, some in the mines, others at smelters and refineries,” Milt said. “We had a pretty diverse set of employees, from engineers to business and everything in between. Being able to bounce different ideas off of one another for each of our locations, as well as hearing the perspectives of people working in different disciplines was really beneficial.”

For Donna, the fellowship was also a way to turn her passion for the environment into action.

“I think that the Earthwatch trip lights a fire and renews that passion that you hopefully already have for the environment, but really helps to ignite it and bring that fervor back,” she said. “I think it made a big difference in my energy level and passion to get moving on the action projects and try to get tangible results. I probably wouldn’t have gotten involved with any of it without Earthwatch.”

And this is one of the reasons the Alcoa Foundation started this partnership – to empower all Alcoa employees to take action.

“This is a learning opportunity for everyone involved. The Earthwatch Fellowship program allows people from all different career backgrounds and job descriptions to be able to participate,” Alice said. “At the end of the day, it’s about moving the needle on climate change and biodiversity conservation but making it applicable to everyone.”

To learn more about Earthwatch’s corporate partnerships, visit our website or email Gitte Venicx,
the director of strategic partnerships for Earthwatch, at partnerships@earthwatch.org.